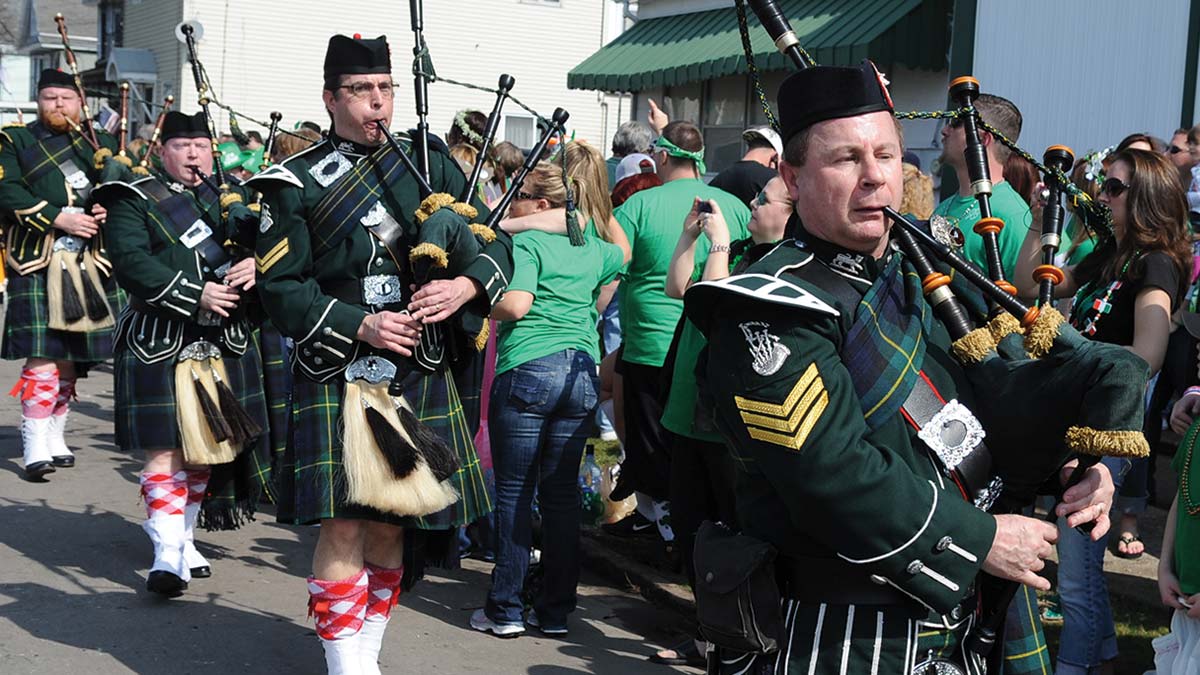 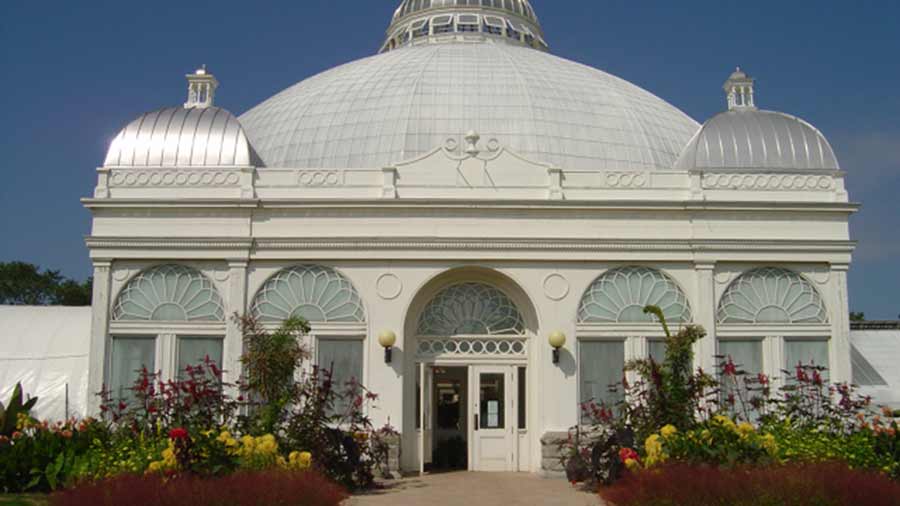 South Buffalo has always been the heart of Buffalo’s Irish community. What was true one hundred years ago, is true today. The heart of this close-knit city within a city is the Irish Center where Irish music, dance and culture is celebrated and preserved. Republic of Ireland flags line nearby streets and Irish pubs can be found along thoroughfares like Abbott Road and South Park Avenue. This side of the city is also home to three of the best wing joints in the world – 911 Tavern, Doc Sullivan’s and the Blackthorn Pub (the longtime favorite of beloved native son, the late Tim Russert). South Buffalo also has the good fortune (the luck of the Irish?) to be anchored by two Frederick Law Olmsted parks. South Park is home to the Buffalo & Erie County Botanical Gardens while Cazenovia Park is the more scenic of the two, highlighted by the gently flowing creek it was named after. 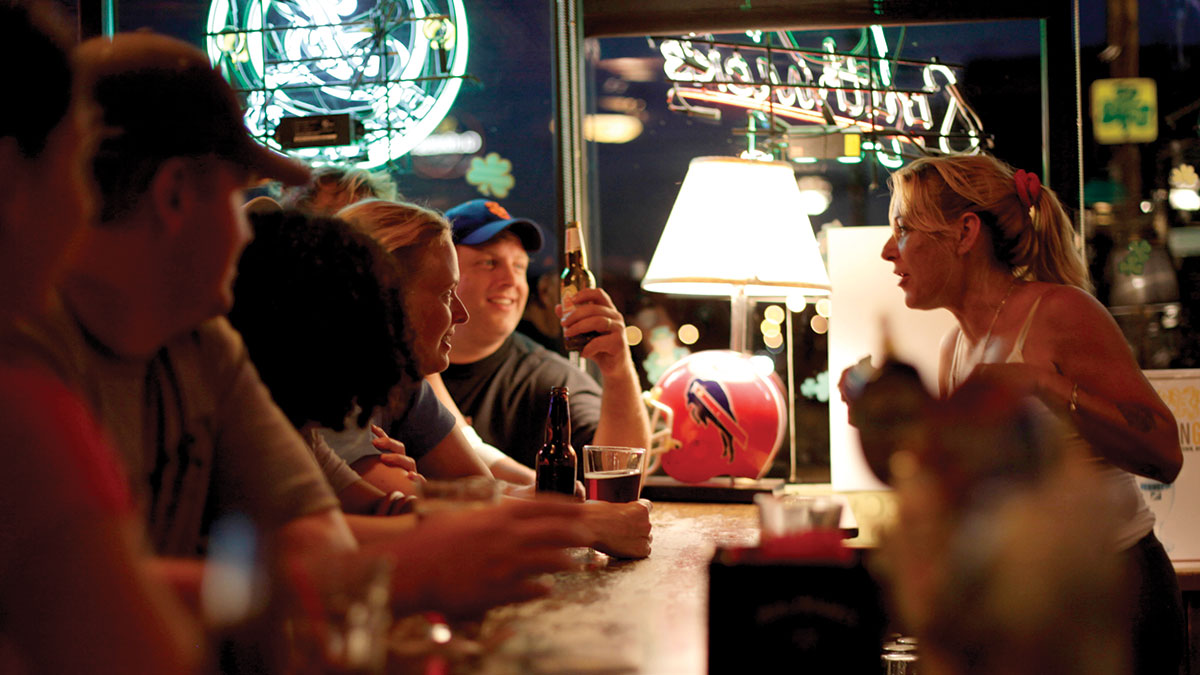 Not all of Buffalo’s nightlife is found in flashy nightclubs. In fact, the city is filled with old-school watering holes that reflect Buffalo’s working-class and ethnic roots. These are the kinds of quirky, family-run bars you hear tales of. Like Arty’s Grill, where patrons can reinforce their claims of having spent a Sunday afternoon worshipping by picking up a church bulletin on their way out the door. Or the Adam Mickiewicz Library and Dramatic Circle that hides a private bar filled with one of the nation’s largest selections of Polish beers.

Ulrich’s Tavern and the Swannie House, Buffalo’s two oldest taverns, have been serving their neighborhoods for well over a century, while Cole’s has been whetting the Elmwood Village’s whistle for over 80 years. Gene McCarthy’s, a favorite spot near the grain elevators in Buffalo’s Old First Ward, brews its own beer, while South Buffalo’s Blackthorn Restaurant and Pub earned a spot on the Food Network’s “Diners, Drive-Ins and Drives.” No classic pub tour of Buffalo would be complete without a visit to Founding Fathers, featuring free popcorn and nachos and presidential memorabilia covering the walls.

Check out the listings below for some of the city’s best-kept secrets! 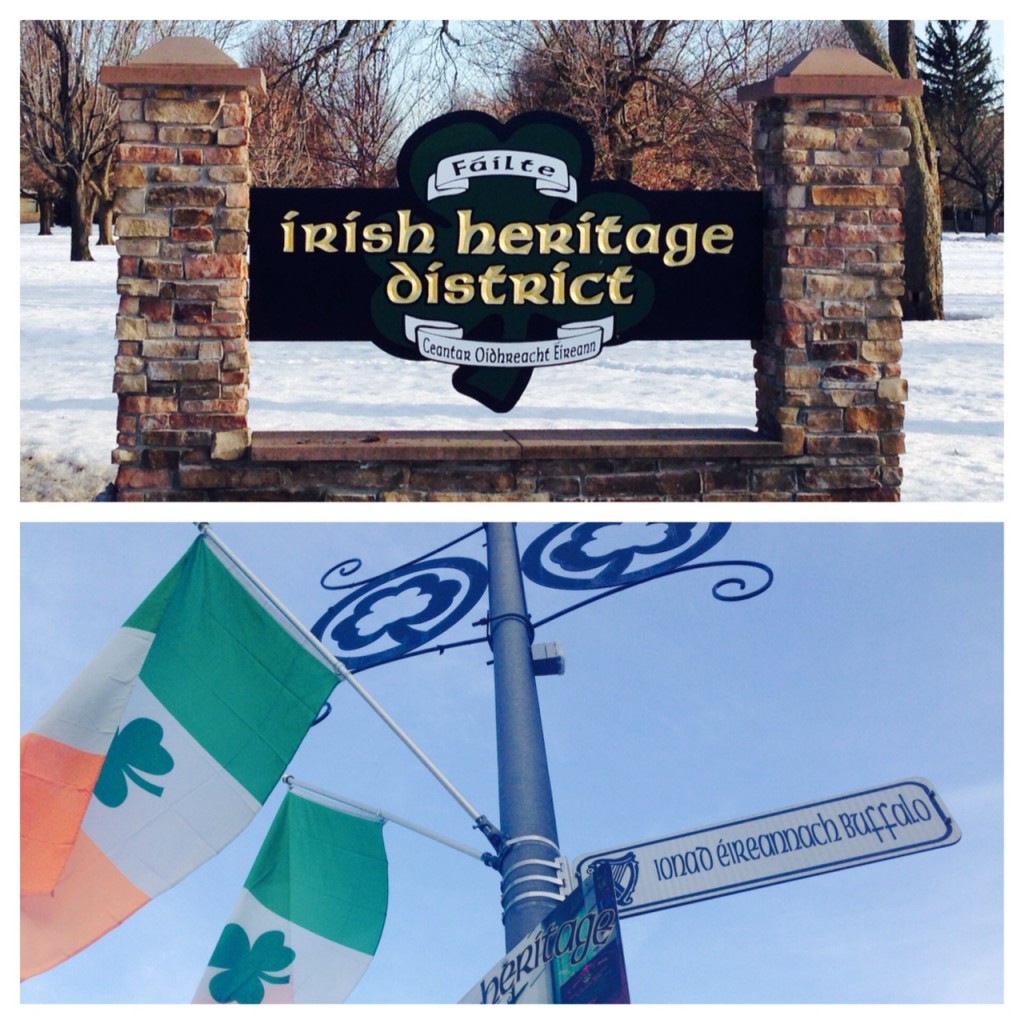 In the spirit of St. Patrick’s Day, it’s only right to give a proper nod to Buffalo’s Irish community built over the last two centuries.

So I strapped on my Irish dancing shoes, grabbed a drinking, ahem, I mean tour buddy (my boyfriend, a self-proclaimed history buff) and headed to South Buffalo to do some exploring.

Our tour started at the epicenter of the South Buffalo Irish community, the Buffalo Irish Center. We had the chance to meet up with Mary Heneghan, current chairman of the Gaelic American Athletic Association (GAAA.) We talked parades, food, music and a little history.  I learned that the Center, established in 1970, was intended to be a spot for Irish Americans to come together to celebrate and promote music, dance, education, genealogy and Irish language.

From mid-February to the end of March all eyes seem to be on South Buffalo.  The main event at the Buffalo Irish Center is on March 17 beginning with mass at 10:45 a.m. followed by a traditional Irish breakfast at 11:45 a.m. and music and dancing throughout the day into the evening. And the fun continues on March 18 as the Irish Center hosts even more dancing with Rince na Tiarna and Clann na Cara. Check out the Irish Center’s Facebook page for all the details.

Year round, the Buffalo Irish Center remains open to the public offering food, spirits, music and classes.  It even holds a “Halfway to St. Patrick’s Day” celebration in mid-September. A fairly new festival tradition, the South Buffalo Irish Feis held in Cazenovia Park is a day-long event featuring local businesses, services, food, dance and music. As of 2018, a new group will be taking the reins on this hooley of a festival. And then there’s the pub scene.  Irish are known for a ritualistic pub culture, and of course, the South Buffalo neighborhoods do not disappoint in this arena.  So, if you’re looking to “spin a yarn” at a local friendly Irish bar, South Buffalo pub owners will welcome you with open arms. Here’s just a sampling:

So there you have it, a whirlwind tour of Buffalo’s Irish community! 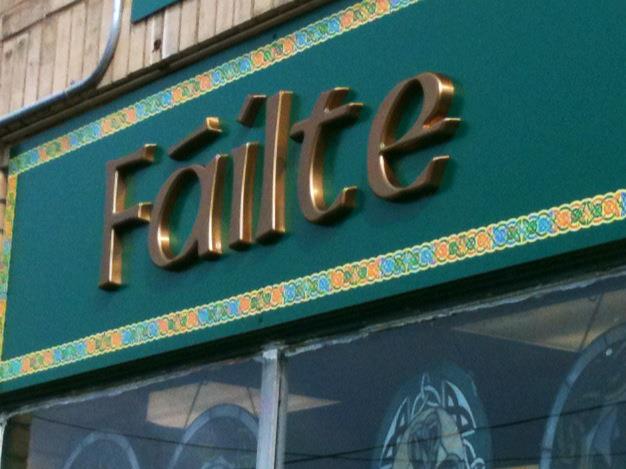 I love you.  Maybe I’ve never told you this, but few neighborhoods have given me as much joy over the years as you have, South Buffalo.  Why, you ask?  What makes you so special? Let me count down the top 5 ways:

5. Botanical Gardens: Besides the galas and concerts they host each year, the Buffalo & Erie County Botanical Gardens serve one very important purpose – getting me through the winter.  A visit to the gardens on a cold February day is a good reminder that bathing suit weather is around the corner.  Bonus: Carnivorous Plants section!

4. Tifft Nature Preserve: A duck bit me in the foot here once.  My point, South Buffalo, is that Tifft is a great way to get up close and personal with nature.  Turtles, frogs, deer, fish, birds: it’s all there for your enjoyment.

3. Irish Culture: Drive around long enough and you’ll notice something different about the street signs: they’re in Gaelic.  South Buffalo, you’re home to an Irish Heritage District, and you take that distinction seriously.  Tara Gift Shoppe deals in authentic Irish gifts and apparel.  Plus Shoppe is spelled with two “P’s” so you know it’s legit.  And the Buffalo Irish Center celebrates all things Ireland year round.  They even have an Irish Library.  You love yourself some Ireland, South Buffalo.  Which brings me to…

2. The Hooleys:  “Hooley” is an Irish term for a wild party. When my girlfriend found out I was writing a blog about why I love you, South Buffalo, she immediately exclaimed, “Just write about the parade!”  YAAAS!  The Valley Center “Old Neighborhood” St. Patrick’s Day Parade is the best parade in Buffalo and one of the wildest parties going.  But that’s not the only one, is it South Buffalo?  You’re also home to the South Buffalo Irish Feis held in Caz Park every September. And speaking of hooleys, the number one reason I love you is… 1. The Pubs:  If I’m “going out” I head downtown.  If I’m going drinking I grab legendary bartender and South Buffalo native Brian Scanlon, and I head to you, South Buffalo.  Brian is my South Buffalo Sherpa.  He helps me navigate your smorgasbord of Irish Pubs and watering holes.  Here are a few of my favorites:

–  Blackthorn: My favorite South Buffalo bar.  There’s nothing better than a stubby bottle of Genny in the wee hours of the morning at Blackthorn.  I’m always sure to order some food too.  Everything on the menu is delicious.  There’s no wrong answer.

So you see, my dearest South Buffalo, my love for you is as endless as the Blackthorn’s supply of Genesee beer.  It’s as wild as the creatures of Tifft Nature Preserve, and as authentic as the goods in Tara Gift Shoppe.  Never change South Buffalo.  You’re perfect the way you are.