Explore Our City of Murals

My hometown sure looks a lot more colorful these days than when I was growing up. Buffalo has quietly become a contender for the title of most murals per capita in the country. Vibrant public art winds its way through my city’s neighborhoods, enhances its busiest streets and splashes the sides of its cafes, pubs and boutiques with funky, offbeat accents.

One of the best things about public art is that it’s dynamic. More and more colorful pictures pop up on more and more of Buffalo’s walls—adding character, fostering positive neighborhood change, and creating a veritable street gallery. See how Buffalo embraces public art and meet the artists behind your all-time favorite murals.

Murals are everywhere here thanks to the Buffalo AKG Art Museum’s Public Art Initiative, which has attracted internationally renowned muralists and inspired local artists to make the city their canvas. I set out to re-discover Buffalo through the lens of its ever-evolving public art scene, and explored all there is to see, eat and drink along the way. Here is my guide to three of the most walkable public art clusters in Buffalo: 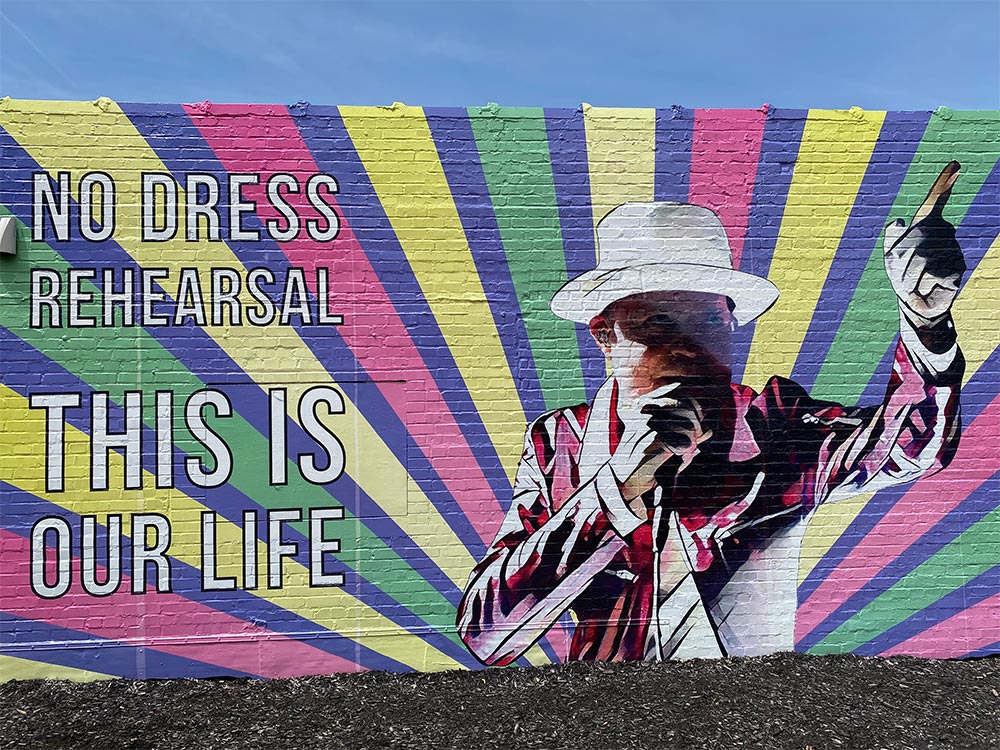 Hertel Avenue might just be the best place to experience Buffalo’s booming street art scene, boasting Instagram-worthy murals on nearly every block among its boutiques, restaurants and cafes. My journey began at Starin Avenue, where I grabbed a cup of Public Espresso coffee from Dash’s Market before heading west on Hertel Avenue to gaze at the face of Gord Downie, the late lead singer of the Canadian rock band The Tragically Hip, who considered Buffalo their second home. “NO DRESS REHEARSAL. THIS IS OUR LIFE,” the mural poignantly reminded me as I made my way west down Hertel.

The neighborhood I grew up in shines on this sunny day, enhanced by the vivid colors of Michael Morgulis’s “Buffalo Unbound” high above the street at 1585 Hertel Ave. Crossing Parkside Avenue, the patio at Lloyd Taco Factory and Churn Soft Serve buzzes with activity, and the marquee of the historic North Park Theater glows anew after its restoration. Hertel is “Lookin’ Good,” and local artist Casey Milbrand agreed, splashing those words two stories high in a colorful, rainbow themed mural at 1472 Hertel Ave.

I continue on to Hertel and Colvin Avenue, where Bunnie Reiss’ “Magic Buffalo” mural completely surrounds Joe’s Deli (1322 Hertel Ave.). I grab a quick shot for my Instagram story of the surrealistic bison painted among flowers on the side of the building, then make my way one block south of Hertel to one of the city’s greatest street art surprises, Hertel Alley.

Freestyling color by some of Buffalo’s best street artists covers nearly every building along the alleyway’s three blocks stretching from Colvin to Traymore Avenues. At Traymore, I make my way back to Hertel to find the likeness of two of the city’s favorite sons, Johnny Rzeznik and Robby Takac of the Buffalo-born band The Goo Goo Dolls, covering the side of 1212 Hertel Ave – the work of another local legend, artist Philip Burke.

I travel one block further west to reach my final destination, the towering image of Mark Twain and his longtime friend John Lewis adorning the side of 1188 Hertel Avenue. World-renowned muralist Eduardo Kobra created this epic mural, a nod to the two years Twain spent as a newspaper editor here early on in his life. Inspired but starving, I grab a quick meal of chicken shawarma at Shish Kebab Express to refuel for the next stop on my public art odyssey. 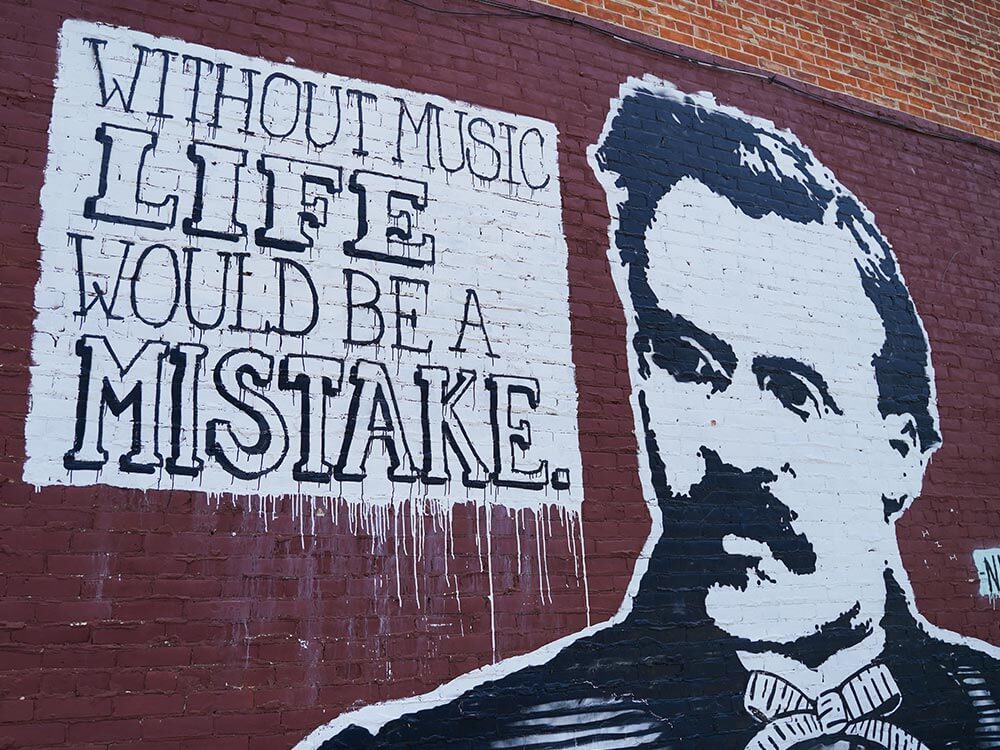 Allentown painted its bars, pubs, stores and restaurants with colorful art long before the rest of the city decided it was cool. The murals along Allen Street seemingly blend in with the creative, artistic fabric of Buffalo’s longtime bohemian neighborhood, from its rainbow colored sidewalks to the many galleries found on the surrounding streets.

I start my walk near Days Park by a mural of philosopher Frederic Nietzsche, who declares, “Without Music, Life Would be a Mistake.” This mural has for years graced the side of one of Buffalo’s legendary music bars, Nietzsche’s, which features a Celtic music jam I love to attend every Saturday afternoon. As I continue on Allen Street, I notice eccentric and offbeat colors and collages on the side of nearly every building.

I stumble upon the maritime-themed “Voyage” mural by Chuck Tingley as I approach Elmwood Avenue, the busy intersection made magical by the soap bubbles filling the air – the work of Buffalo’s legendary Bubble Man who uses his nearby apartment to make living public art.

As I walk, a mural hiding in plain sight catches the corner of my eye: the striking “Buffalo Buildings” at 172 Allen St. features an incredibly detailed illustration of downtown’s architectural marvels modeled from an architect’s pencil sketch created more than 30 years ago.

I’m tempted to take a seat at the bar of Gabriel’s Gate and grab some of Buffalo’s best wings and a Labatt, but I decide to press on and cross Delaware Avenue. Allentown has long been a hub for Buffalo’s LGBT community, and the new “Stonewall Nation: WNY LGBT History Mural” on Q Bar at 44 Allen St. features more than two dozen portraits of local and national LGBT activists, a fitting exclamation point on this neighborhood’s welcoming legacy.

As I reach my last stop at the intersection of Main Street, the new University at Buffalo Medical School towers over me. Here, the winding, vividly-colored “Gut Flora” sculpture by local artist Shasti O’Leary-Soudant greets commuters at the Allen Street Metrorail stop. On my return walk back, I stop to feast on those Gabriel’s Gate wings. Mission accomplished. 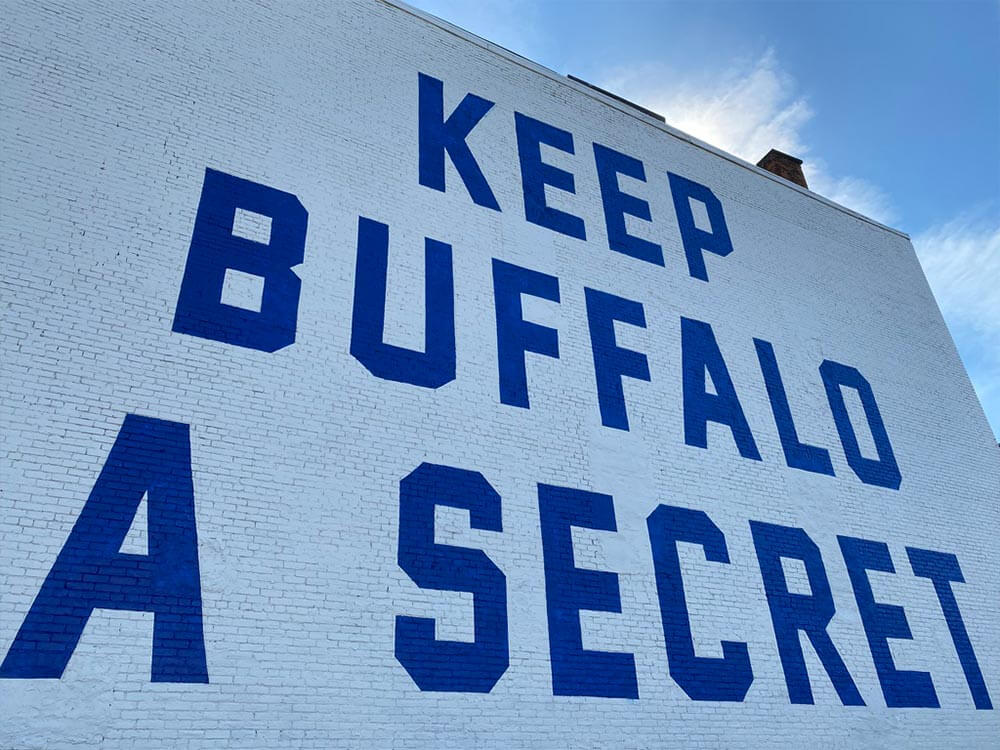 It should come as no surprise that Buffalo’s cultural and culinary hub has also become a hotspot for amazing public art. I start my journey through downtown Buffalo at a mural that implores me in big, bold letters to “KEEP BUFFALO A SECRET.” (836 Main St.) No way: I add an image to my Instagram story and continue down Main, past the beautiful St. Louis Church and to the powerful “Love Black” mural at 712 Main St. by Edreys Wajed.

As I cross Tupper Street, the entire side of the 710 Main Theater has been covered in a funky collage of colors too expansive for any one iPhone image. The “Noodle in the Northern Lights” mural serves as my welcome to Buffalo’s vibrant Theater district.

Heading east on Tupper and south on Washington, I pass the eye-popping, mind-bending work of world-renowned muralist Felipe Pantone that fills the entire rear façade of the Town Ballroom.

A quick left at St. Michael’s Place takes me to Ellicott Street, where Buffalo’s postcard-on-a-wall awaits. Casey Milbrand’s “Greetings From Buffalo” mural has become one of the most photographed locations in the region; if you visit our city and don’t share an image from this mural, were you even here?

Heading south to Genesee Street and continuing past the brilliant Electric Tower until I reach Washington Street, I come face-to-face with a stunning painted panorama of a nearby cityscape that architecture critic Ada Louise Huxtable called “The Greatest Urban Vista in America.” Logan Hicks’ stenciled “Walking Back Time” depicts downtown’s Court Street looking towards City Hall; I make my way two more blocks south to Lafayette Square to see this vista for myself.

I then turn around at Lafayette Square to admire one of Buffalo’s largest murals, Louise Jones’ “Wildflowers for Buffalo” on the side of 465 Washington St. that adds a massive bouquetto the heart of downtown.

And I save a cold one for last: I order a pint of Low Bridge Golden Ale at the Erie Canal-themed Big Ditch Brewing Company around the corner and admire the two-story mural inside the brewery that declares “STRENGTH. PRIDE. AMBITION.” As I sip my beer, I realize the same traits that helped build Buffalo nearly two centuries ago are fueling one of the country’s most compelling public art scenes today.

Looking for more amazing murals for your Instagram feed? Nearly every corner of Buffalo beyond these three neighborhoods features incredible public art. We’ve rounded up some of the city’s other can’t-miss installations just waiting to be discovered on your next visit here. 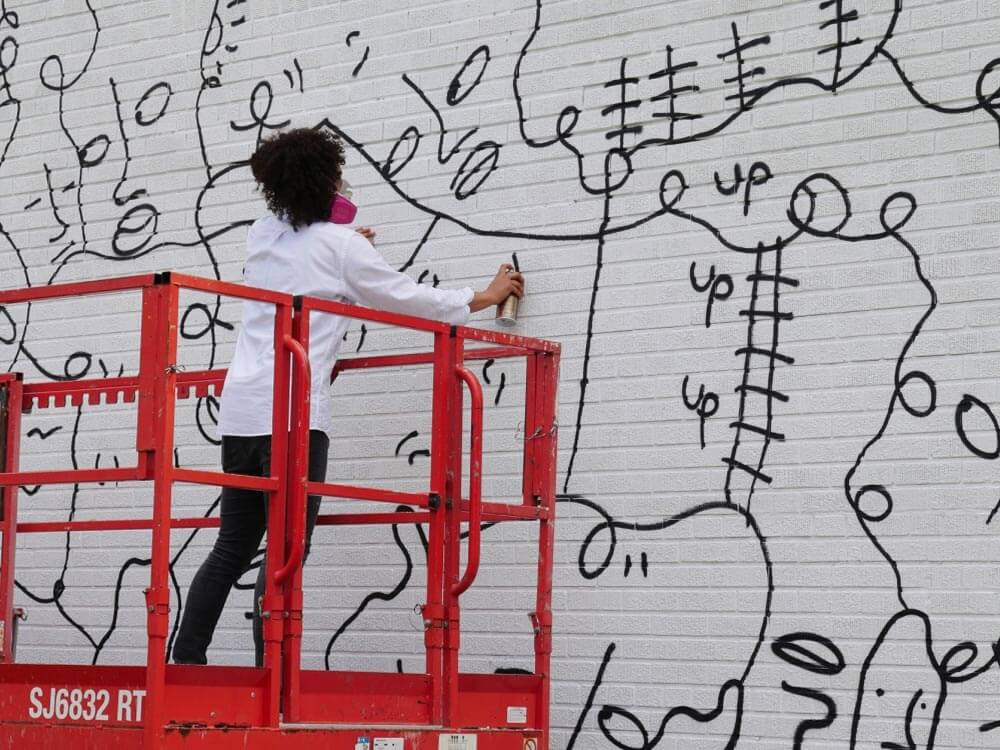 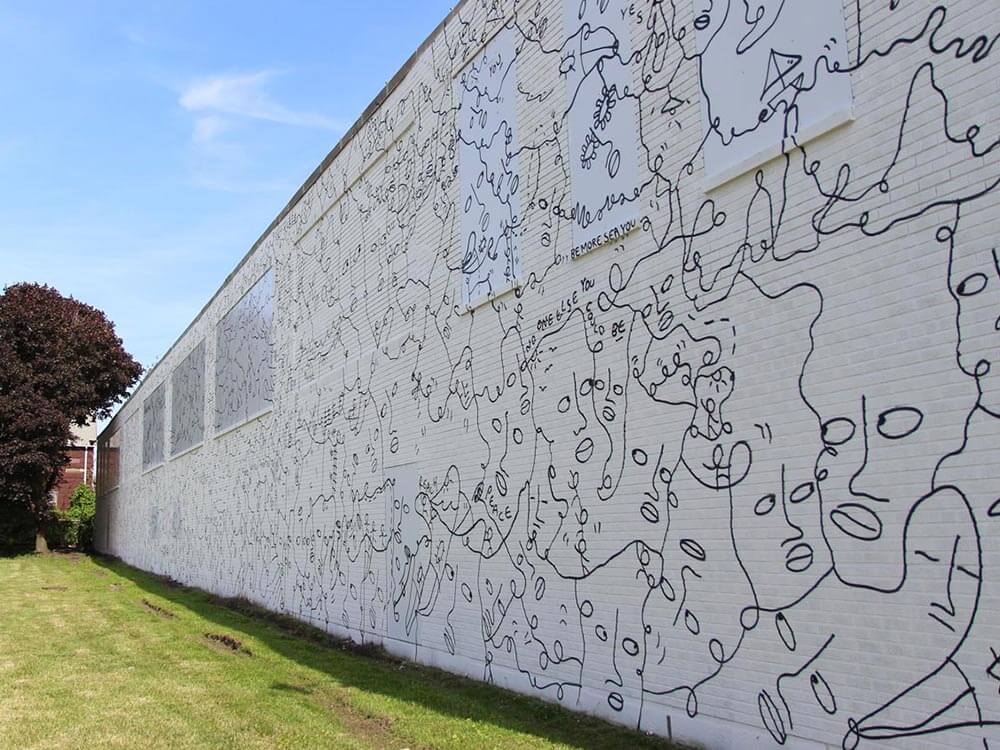 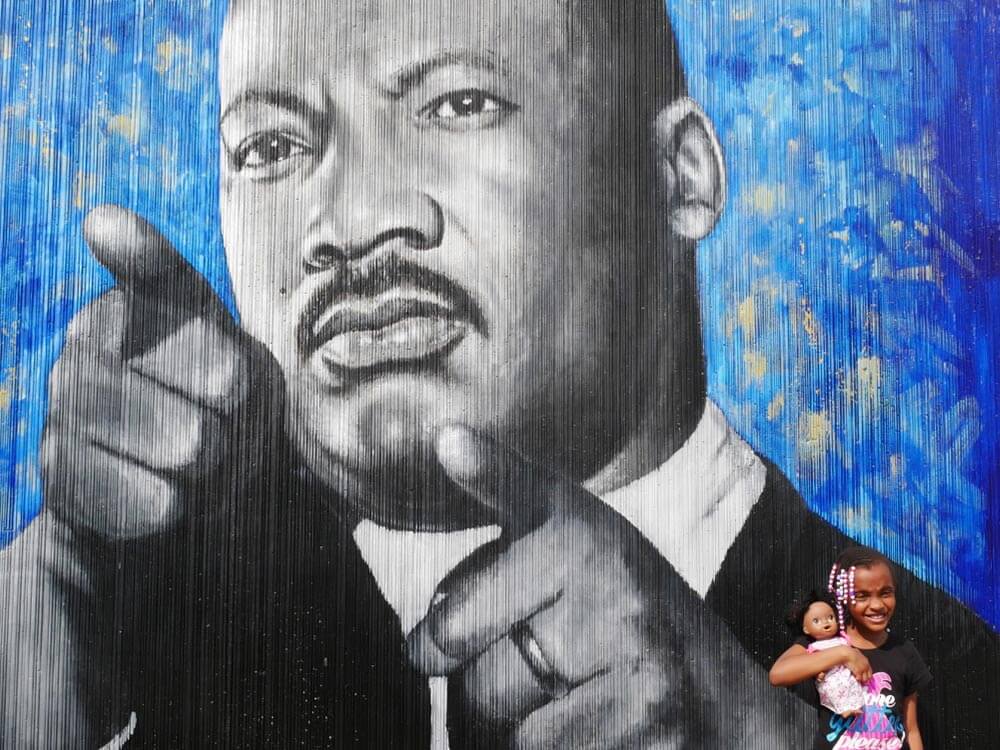 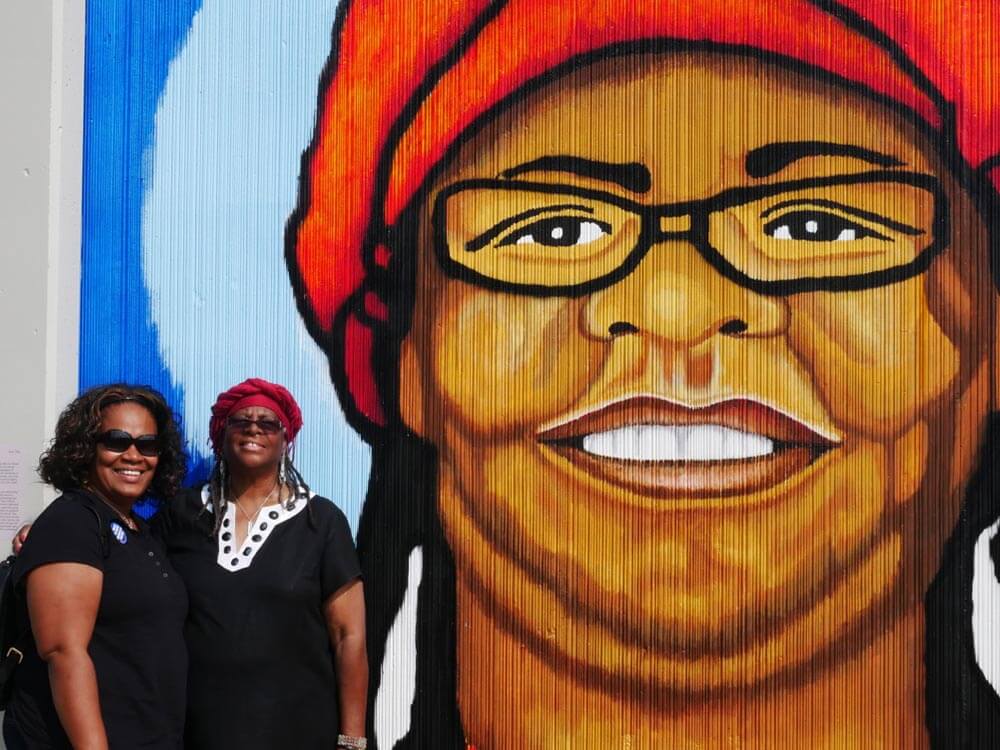