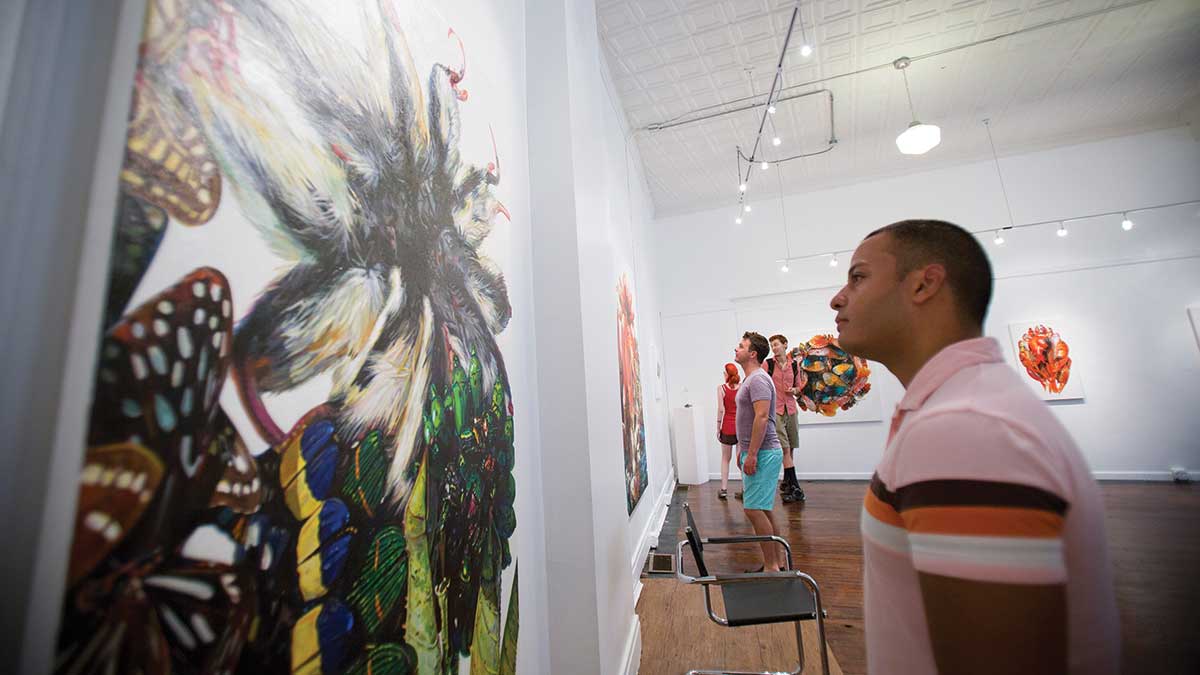 If Elmwood is the movie star of Buffalo neighborhoods, then Allentown is the artist. Wall-size murals flank the district’s many live music bars, neighborhood galleries, restaurants and shops. Beautiful brick buildings and characters like the “bubble man,” who blows bubbles out of his apartment window at the corner of Allen Street and Elmwood Avenue, give the neighborhood a creative energy unlike anywhere else in the city. 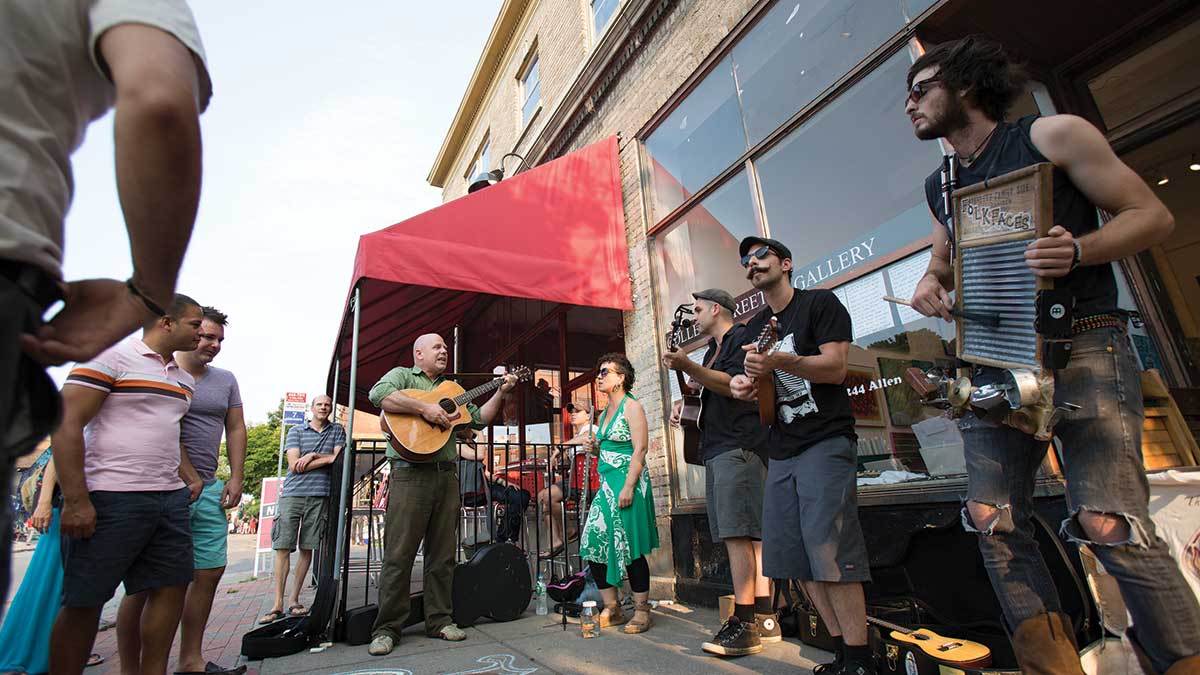 Most people would describe Allentown with adjectives like “funky” and “hip.”  While Allentown is pleasantly weird, it’s also secretly luxurious, and one of the best places in the city to combine funky and fancy into a weekend getaway.

Fancy first.  Check into the Mansion on Delaware.  Why?  Because the Mansion is a AAA Four Diamond hotel with 24 hour butler service.  After you (or your butler) drop your bags, make use of their complimentary shoe shine and pressing service, head to the lobby for a complimentary cocktail or two and then use the free shuttle service, a Range Rover, to ride in style to dinner.  Now, you could use the complimentary internet to find a place to eat but you should take my word for it and head to Tempo for their prosciutto wrapped filet mignon.

Sleep in and take advantage of the Mansion’s complimentary European style breakfast.  Then head up the street to the Theodore Roosevelt Inaugural National Historic Site for a history lesson.  The museum is located on the site where Roosevelt took the Oath of Office and was sworn in as the 26th President of the United States.

Then, head around the corner to for a session at Massage Therapeutic Arts on North Street. Their motto? “A sanctuary in which to heal and rejuvenate.”  This has you written all over it.

Fill out the remainder of the afternoon with music. Nietzsche’s has carved out a niche as one of Buffalo’s prime live music bars every night of the week. But one of the city’s best kept secrets also takes place here at 4:30 every Saturday afternoon, when a group of local musicians gather for a casual Celtic jam. Grab a pint of Guinness and enjoy.

It’s time to get funky!  Walk down Allen for a Mexican meal at Cantina Loco.  After that, stay on Allen for a cocktail or three.  The fun-filled crew at Colter Bay serve over 30 microbrews.  After that, make your way to the back room bar at Allen Street Hardware.  End your night with a famous steak sandwich at the Old Pink, a Buffalo classic.  When you’re ready, call the Mansion and Range Rover it home.

Betty’s is an Allentown classic; a restaurant that embodies the character of the neighborhood while also serving up one of the most popular Sunday brunches in Buffalo. Start your day here.

Make your last stop an afternoon performance of the Buffalo Philharmonic Orchestra in the acoustically perfect Kleinhans Music Hall. Sit back, relax, and start planning your next trip to Allentown. 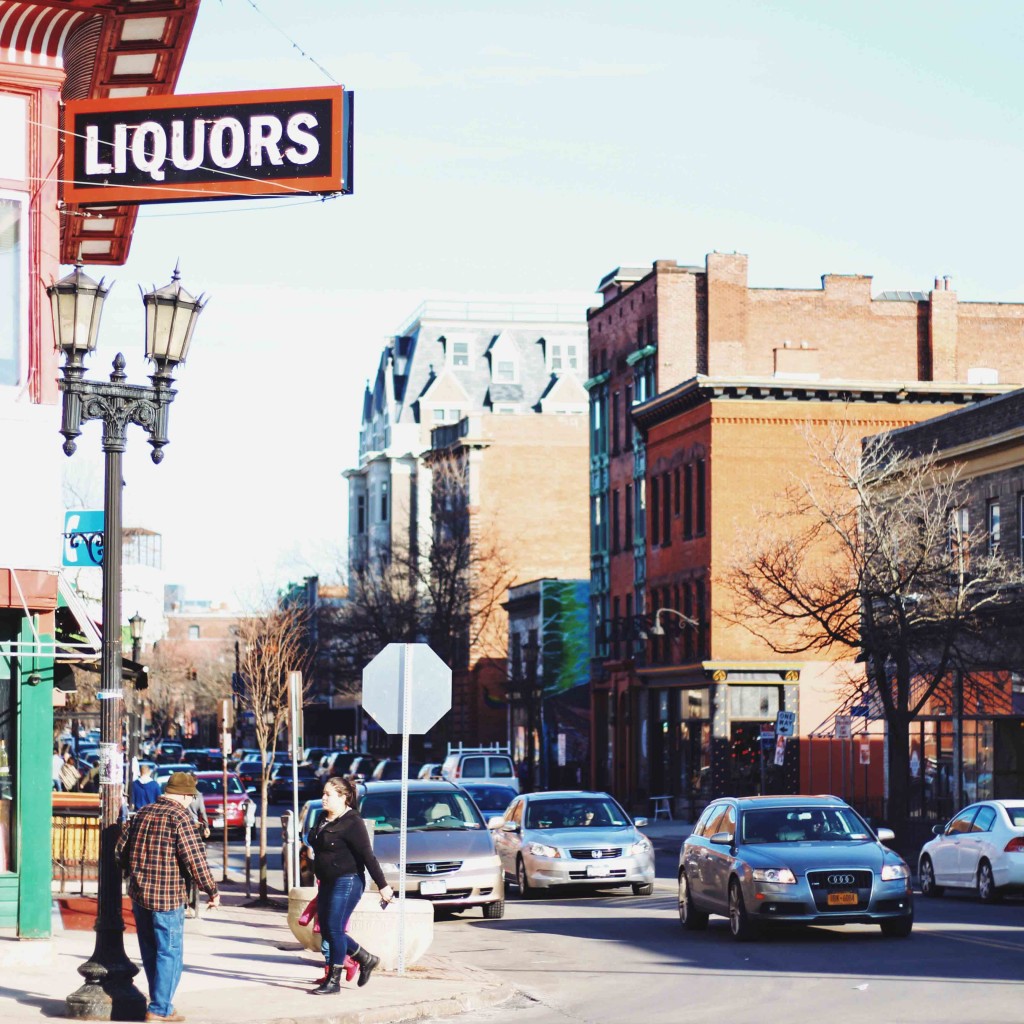 Over the last three years there has been a lot of buzzing restaurant activity in Allentown. The culinary boom in the City of Buffalo has certainly made an impact on this tiny, artsy neighborhood. Several of our recommendations have only been open for two years or less, but that doesn’t mean they aren’t worth checking out. There are also a few locations on this list that are staples of the neighborhood and have been open for decades. If you want to live it up with the cool kids, here are some recommendations for your next meal in Allentown:

Billy Club
One of the most exciting openings in all of Western New York in 2016, Billy Club features a stylish dining room and bar with a small but ever changing menu from Chef Scott Crombie (Buffalo Proper) and a great whiskey & cocktail list put together by owners Dan Hagen and Jake Strawser. This is a great spot for dinner before a show or just a nice place to sit down with a Manhattan and some friends. Mothers
Mark Supples’ Allentown institution doesn’t have a website or really much online presence at all, but that hasn’t stopped it from being one of the most popular restaurants in Allentown for over 20 years. They serve food well after midnight, but we’re not talking chicken finger subs. Want a juicy steak or tender porkchop at 1am? This is the place to go. Plus, the patio is one of the best in the city!

Cantina Loco
One of the most popular places to eat and drink on Allen, Mike Andrzejewski‘s Mexican restaurant attracts big crowds with their own take on Mexican cuisine and a large tequila list. Want to crush a margarita in a cactus glass with a giant plate of nachos? They’ve got you covered. Want to try a flight of smoky mezcal while enjoying a Koreatown burrito stuffed with kimchi? They’ve got that too. The Pink
After living across the street for 4 years, I’ve made more visits to The Pink then I can remember. This bar is great for happy hour drinking, grabbing a steak sandwich or thick slab of fried bologna and playing some pool or darts. But it’s most popular after 2am on the weekend. That’s when you’ll find the bar packed three-deep with a full dance party going on. If you find yourself there, order some PBR’s and let loose.

Allen Burger Venture
Mike Shatzel’s punk rock bar is dedicated to three things: whiskey, burgers and craft beer. The dry-aged grass-fed beef burgers have a wide variety of toppings to choose from, but I personally like to go there for the beer selection as it’s one of the best in the city. (Side note: Mike’s newest bar, the recently re-opened Colter Bay just down the street, also boasts a stellar beer selection and is a little bit more roomy than ABV). Allen St. Poutine
It took a long time for someone to offer reliable, consistent, delicious poutine in Buffalo. Thankfully, a couple years ago, two Canadians finally moved down to Buffalo to make it happen. This poutinerie is open for lunch, dinner and late night for when you’ve maybe had too much to drink.

Other Allentown eats: Café 59 has had several locations around Buffalo, but what you need to know is they serve one of the best Chicken Finger Subs in WNY and their bar is great for a quiet night out. Pasión makes you feel like you’ve traveled somewhere exotic, with a tropical vibe and a long list of rum-based tiki drinks. The Melting Point is a great spot for a quick lunch or dinner; their menu consists primarily of grilled cheese sandwiches with a variety of healthy fillings. Gabriel’s Gate is the go-to wing recommendation for people who are looking for something a little bit under the radar. With a warm, lodgy atmosphere located in a historic Allentown building, you won’t be disappointed with these wings.