On a recent Saturday evening after stopping out for a couple beers at my favorite dive bar I stood on the corner of Allen and Elmwood to take in the sights and sounds. This of course is one of the major intersections in the neighborhood. It was one of those idyllic late summer evenings in the city; a warm breeze and starlit sky; the moon could be seen rising between buildings. The street was bustling and music could be heard coming from the open doors of clubs and echoing off buildings. If not for some passersby wearing masks it could have been pre-pandemic.

A well-dressed couple stopped and asked for directions to a restaurant. Before I could answer, a street person interrupted and in quick succession—almost simultaneously—offered directions and asked for money. The couple thanked him, gave him a couple dollars and walked away. Then, turning to leave, I was almost run over by a young punk on a skateboard rounding the corner at breakneck speed, the neck of his ukulele which was sticking out of his backpack zipped past my face. This brief story is a cross section of and encapsulates why I love Allentown. It is a mishmash of so many things and anything goes. But to expound on the statement which is the title of this short piece—Why I Love Allentown—I first should say a few things about the neighborhood and my relation to it.

The first time I came to Allentown was the summer of 1980; I was just out of high school and came for the annual art festival with a friend. Growing up in East Buffalo and then living in the suburbs, I was not familiar with the neighborhood. Upon arriving I fell in love immediately and in many ways never left.

I’ve had a few residences here, including the Civil War era “workman’s cottage” which I’ve resided in for the past 20 years. For a few years, I co-owned a restaurant on Allen Street, and as a working chef can count at least three other restaurants in the neighborhood where I’ve been employed. For more than a decade, I was chef at the historic Twentieth Century Club, the second oldest women’s private city club in the country, just a few blocks from my home, and I would joke that my bicycle commute took five minutes. My now grown son went to Tapestry Charter School, first in its original location on North Street and then at Days Park before it moved to North Buffalo. In short, Allentown is as much a part of me as I am of it.

Living in Allentown has enabled be to become completely car free. Given the close proximity of stores, businesses, hospitals, and other essentials, the website Walkscore.com gives the neighborhood a high ranking of 93, which in their criteria is considered a walker’s paradise. Indeed, groceries, nightclubs, restaurants, art galleries, and my favorite bicycle shop, Rick Cycle, which opened in 1898 and is the oldest bicycle shop in the city, are just a few minutes’ walk from my home. The Theater of Youth, in the old Allendale theater, is one block from my house, and the incredibly inspiring Symphony Circle—one of the many circles in Buffalo designed by Frederick Law Olmsted—site of the renowned Kleinhans Music Hall (home to the Buffalo Philharmonic Orchestra), and the historic First Presbyterian Church, are within a few minutes’ walk. The Elmwood Village and Downtown Buffalo—and all they have to offer—are just a short walk or bike ride away. In addition, the Buffalo Niagara Medical Campus and UB School of Medicine sit just at the edge of the neighborhood.

Allentown takes its name from James Falley Allen who originally owned the land. Allen Street—the neighborhood’s main thoroughfare—is said to have originally been a cow path. After Allen sold the land the city rapidly grew northward and occupied the streets we now know as Allentown.

There are three urban parks within Allentown: Days Park, named after Thomas Day who donated the land to the city in 1854 (the park was later designed by Frederick Law Olmsted in 1887); Arlington Park, where Frederick Law Olmsted lived while designing and building Buffalo’s elaborate park system; and the smallest of the three, Sisti Park, a small parcel of land at the intersection of North, Franklin, and Linwood. It’s named after Anthony (Tony) Sisti, the artist and boxer who grew up in Greenwich Village and maintained a studio here. Many credit Sisti with making the arts synonymous with the neighborhood. He is also one of the founders of the Allentown Art Festival and some of his work hangs in the Buffalo AKG Art Museum. His former residence and gallery is on Franklin Street near Allen, just a couple blocks from his namesake park.

But I still haven’t commented on why I truly love Allentown. Well, in short, a person can be whoever they want in this neighborhood and no one would bat an eye. Not unlike a micro-version of the aforementioned Greenwich Village, Allentown is in many ways a village within the city; it has a different feel to it. High-end and meticulously kept Victorian homes sit side-by-side with apartment buildings and humble workman’s cottages. Bars, restaurants, coffee shops, galleries, and antique shops dot the neighborhood. As I type these words I am sitting in an Allentown coffee shop.

Street musicians are a common sight and sound on Allen Street, and if you stand at the intersection of Allen and Elmwood with bubbles raining down night and day, it certainly has the feel of an adult version of Sesame Street. 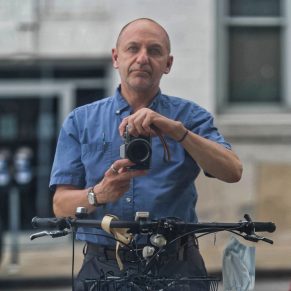 Writer, photographer, chef, interfaith minister and lifelong Buffalonian, documenting the streets of the City of Good Neighbors for as long as he can remember. He hasn’t owned a car or television in more than 10 years and lives in a 160 year old house in Allentown with his two elderly pugs.