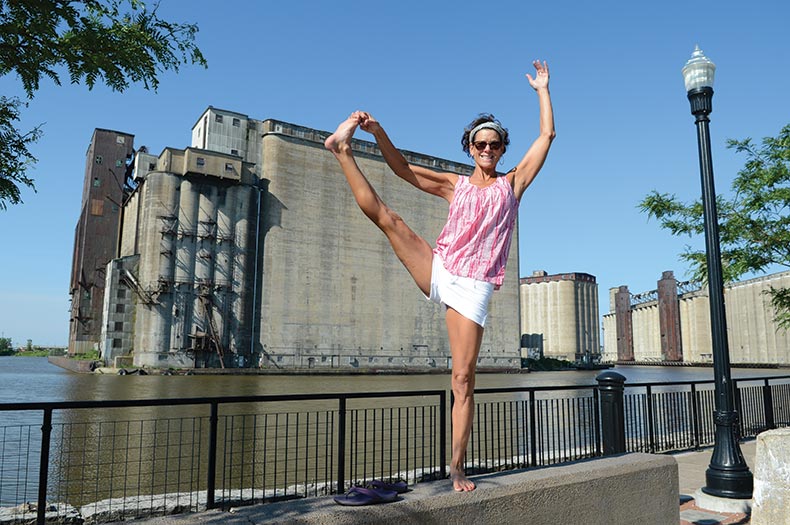 Lauren, visiting a relative in Buffalo and who lives in Santa Cruz, California where she works as a realtor, said that she could not leave the city before seeing the grain elevators on the waterfront that she heard about from several people. She got her wish at the end of her three-day visit, viewing Buffalo River and grain elevators from South Street in the Old First Ward. She was impressed, and that some are still in use. Her first day in Buffalo she did a “ten-mile walkabout, from Lafayette Square to Gates Circle up Delaware. “We (her and her sister) grabbed coffee at SPoT, it’s cool!, browsed some of the funky stores on Elmwood and walked through some cool neighborhoods. I saw everything: colonial mansions, Victorian homes, and Tudor-style homes. I was really struck by the age of some of the structures, and the spaces – not just what’s in the spaces but the spaces themselves, the attention to detail and quality that I don’t see in buildings where I come from. We went to the top of City Hall, the twenty-fifth floor, and it was absolutely amazing. And the City Council chambers, gorgeous!” For recreation Lauren is a surfer and stand-up paddle boarder and was impressed with both Lake Erie and Niagara Falls. “I was awestruck by the volume and the power of the water,” she says of the Falls. “I’m blown away by the amount of nature and green everywhere I go in Buffalo, we are suffering drought in California. I also like that there’s art everywhere you look in Buffalo – murals, utility boxes are painted on the street, sculptures. The city is very arts-minded, and there’s a sense that everything is not new, but there’s repurposing of the old here, and I love that. I was here in 2012 and I see a difference here now.”