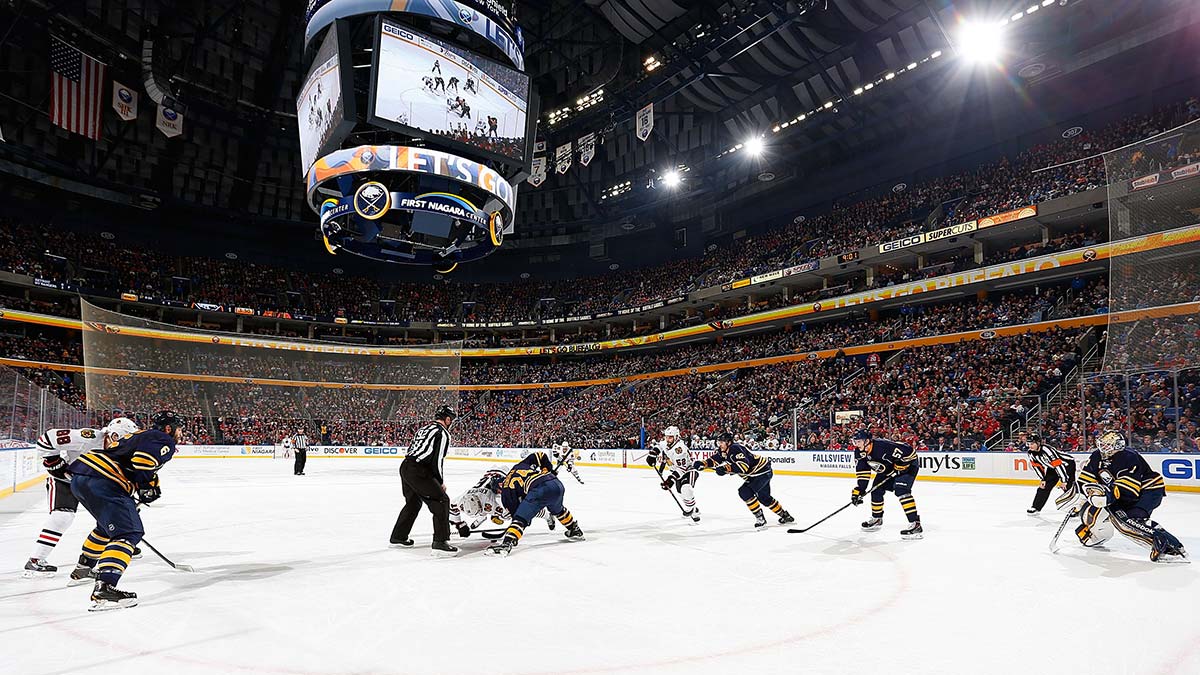 Take a city with no shortage of ice, put it right next door to Canada and you’ll find a perfect storm of hockey fanaticism. And that feeling goes both ways—ESPN The Magazine ranked the Buffalo Sabres No. 1 in their Big 4 professional sports franchises “Ultimate Standings” poll for “giving fans the most back for the emotion, money and time they invest in their teams.” Put it all together and you’ve got one of the best overall fan experiences in professional sports!

Here’s how to make the most of your game-day.

If you’re from out of town, the first thing you’ll need is a place to stay. Situated in downtown Buffalo, the 18,500-seat KeyBank Center is easily accessible from the New York State Thruway and by the Metro Rail line. So staying downtown will make attending a game a hassle-free affair. To put some posh in your pucks, make reservations at The Mansion on Delaware Avenue, Buffalo Niagara’s only AAA rated Four Diamond hotel. For ultimate convenience, just one block away is the Courtyard by Marriott Canalside and a full-service Marriott on top of the HarborCenter complex. Other nearby accommodations include the Hilton Garden Inn, and the Hotel @ The Lafayette.

Before or after the game, fans have been known to flock to the Pearl Street Grill & Brewery.  A block away from the Center is the Cobblestone District, a mix of late 19th and early 20th century brick buildings and cobblestone streets. Just across the street is Southern Tier Brewing Company, a two-story mecca for sports fans featuring a 38-foot television screen and over 70 other flat-screens scattered throughout the The Cobblestone Bar, Swannie House and Pizza Plant are the other closest nearby watering holes.

Or you could fuel your engines during the game  at the concessions inside the Center and get some sightseeing in first. Canalside and the Buffalo & Erie County Naval & Military Park are both right next to the KeyBank Center. A shoreline walking path will take you from there to the Erie Basin Marina Gardens and an 80-foot observation tower from which you can see panoramic views of downtown Buffalo, Lake Erie, the Niagara River and the Canadian shore.

With the best fan experience in all of hockey, no place (not even you, Detroit!) can match the thrill of seeing the Sabres when they’re in town!

The Buffalo Sabres have been one of the National Hockey League’s premier franchises since their inception in 1970. Perennial playoff contenders, the Sabres play their home games at KeyBank Center to routinely sold out crowds. In town between October and April. Don’t miss the action!

Order in: For the big game, Buffalo food scores with expats

Where to Shop in Hamburg, NY

Order in: For the big game, Buffalo food scores with expats

Where to Shop in Hamburg, NY