Arthur Bovino may know as much about Buffalo’s food scene as anyone in Western New York.

Bovino, a New York City based food and travel writer whose credits include The New York Times, Travel and Leisure and Bon Appetit, spent a month last year living and breathing Buffalo food for his new book, Buffalo Everything. The nearly 400 page book may be as comprehensive as any ever written about Buffalo food, offering detailed explanations of iconic Buffalo foods and the best spots to find them, including beef on weck, wings and sponge candy, as well as the new generation of restaurants here and the up-and-coming chefs helming them. 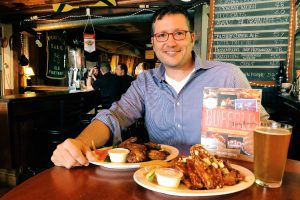 Arthur Bovino, author of Buffalo Everything

The extent of Bovino’s research was exhaustive and mind-boggling, visiting eateries all around the region and interviewing dozens of chefs and restaurateurs. We caught up with Arthur to find out what he learned from his research – and why he thinks Buffalo is a bucket-list destination for foodies. You can order his book, and find out more about upcoming book signings, here: Buffalo Everything

1. What sets Buffalo’s food scene apart? I’d single out a true LOVE for guilty pleasures, a penchant for indulgence, and at the places I mention in the book, a pride in making things fresh and well. You could argue it’s the comfort food capital of America, for sure. And while I’d rather not eat wings anywhere else, it’s not just about its nationally known icons and how well they’re made. There are tremendous lesser-known specialties (steak in the grass, chicken finger subs, stingers, fried Bologna, sponge candy, Tom & Jerry cocktails). Buffalo has great mom-and-pop shops dedicated to their signatures. 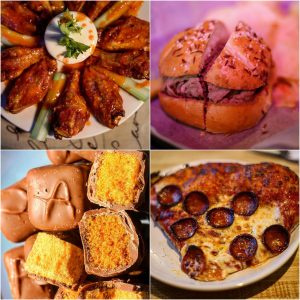 2. What most surprised you about the food scene here? I had no idea of the depth of passion and commitment to the food scene before I started digging in and speaking with folks. I didn’t know how much of a seasonal food calendar there was (Tom & Jerrys, sponge candy, custard, hot dogs, pasta con sarde, and paczki among other things). I didn’t know I was going to find spots like Las Puertas or discover good tacos, or that there was a whole sub sandwich culture to explore. I was also quickly shocked that given the proximity to one of the nation’s most renowned landmarks… Niagara Falls, how little word-of-mouth I’d heard about must-hit spots in nearby Buffalo.

3. What food does a visitor absolutely have to try when they come to Buffalo? You have to have wings and cup-and-char pizza, sure. But you’re also missing out if you don’t seek out: sponge candy, a Tom & Jerry, beef on weck, a chicken finger sub, stinger, steak in the grass, fried bologna sandwich, fish fry, pierogi, doughnuts, stuffed peppers, cheeseburger subs, and a royal. And that just covers the basics. 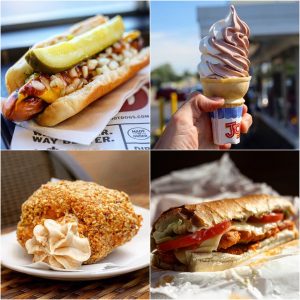 4. Why is Buffalo a great destination for foodies? There’s far more nuance and scope to explore than many would expect. There are great international flavors. And mystifyingly, it’s largely still undiscovered by much of the country.

5. What did you learn during your research here that you weren’t expecting to learn?That Elmo’s does triple-dipped wings? That there were fried chicken wings on the menu in Buffalo back in the 1800s? That somehow a company originally from just outside Boston invented the dressing that New York’s most iconic bar food gets dunked in? Check out the book! 😉