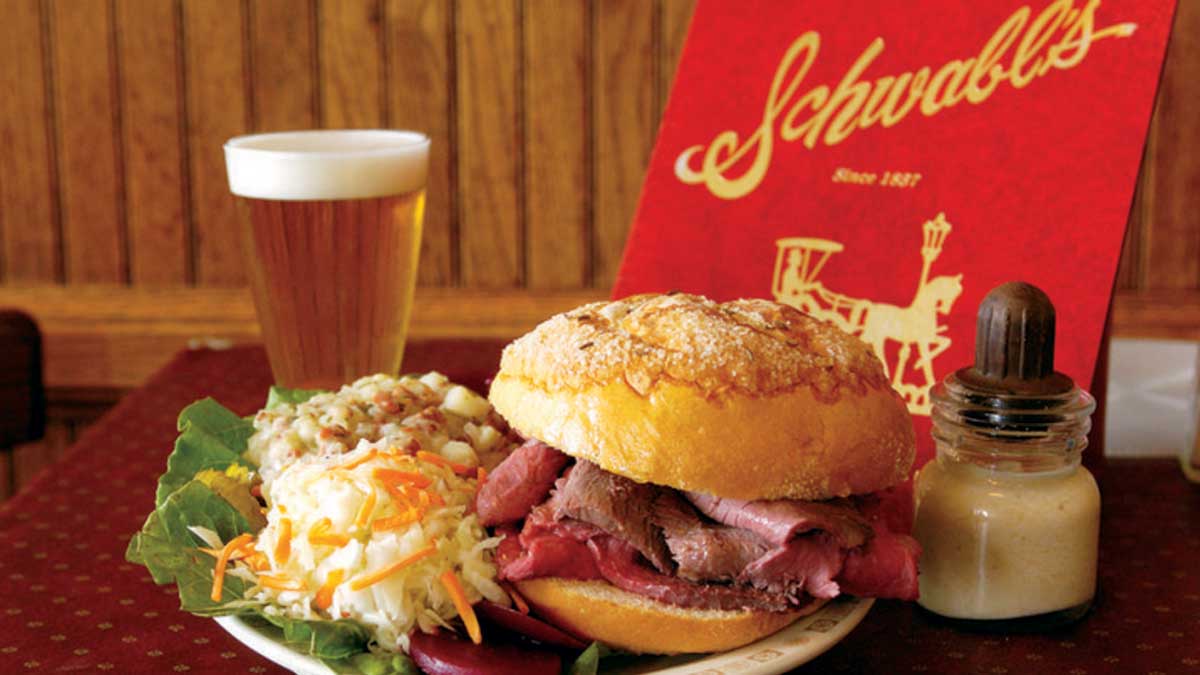 Let’s face it, Buffalo will always be known for its chicken wings. That said, it should be noted that Buffalo has other unique culinary offerings, including the popular beef on weck sandwich.

The sandwich actually predates the chicken wing by decades. While there is no definitive story, most people believe it came to the area either with a German immigrant or from a food stand at the 1901 Pan American Exposition. For those who are unfamiliar, it’s a carved roast beef sandwich served on a unique, salty kimmelweck roll. Regardless of how the sandwich found its way to Western New York, it’s been a staple in local pubs ever since.

There are plenty of local establishments that serve this popular dish but there’s only a handful that do it really well. We’ve created a list of five such establishments that offer excellent beef on weck sandwiches featuring carved beef (ideally offered at your desired temperature) on fresh weck rolls. Most of our selections are institutions in Western New York—neighborhood restaurants that have been dishing out quality sandwiches for years.

Located in the charming village of East Aurora, Bar Bill Tavern has created a large dedicated following over the years. It wasn’t too long ago that the only people who knew about Bar Bill were resident southtowners. Thanks to social media and a slew of local awards, this little neighborhood pub has found a bigger fan base with people from all over Western New York.

When you walk in the door, you’ll see a large piece of beef sitting behind the bar in its own juices. If you stand around long enough, you can watch the staff cut each sandwich to order. The portions are large but believe me when I say you won’t want to share. The beef melts away with each bite and is always tender and juicy. They pile so much beef on the roll that you may end up using a fork to get every last piece. If you want a true tour of classic Buffalo pub food, Bar Bill should be at the top of your list. Just don’t forget cash.

It’s a very good sign when Anthony Bourdain and the Peter Meehan (Editor of Lucky Peach) visit (and, more importantly, enjoy) a local restaurant. Schwabl’s has been an iconic Buffalo institution for over 100 years. They trace their history back to 1837. …1837! The current location has been serving up sandwiches since 1942.

Known mostly for their beef on weck and carved turkey, Schwabl’s also offers a menu of classic comfort food. But most people are only there for one thing. Cooked to order, the beef is always tender and dripping with its own juices. The kimmelweck roll is always fresh and crunchy on top. And the horseradish just seems to taste better than anywhere else. I can’t put my finger on why, but it just does. Their bar is also excellent, serving up old school cocktails like Manhattans, Tom Collins and Lemon Drops. In the winter, grab yourself a Tom & Jerry (a classic cocktail made with egg batter, dark rum and brandy), cozy up to the bar with a sandwich and chat the night away with some regulars.

Charlie Roesch is one of the most familiar faces in Western New York’s food scene. You’ve probably seen him on TV or in print with his white apron, signature white “bump cap” and most likely holding a big carving knife. Locally and nationally, his name has become synonymous with beef on weck. His beef has become so popular that he has made appearances on Good Morning America, Regis & Kelly, The Best Thing I Ever Ate and Food Nation with Bobby Flay. Originally, a small restaurant on Wehrle Drive was the only place you could find their signature beef on weck sandwiches. But over the last 10 years, their products have spread to “express locations” at local grocery stores and gas stations. Sure you can get a good sandwich at those quick stop stands, but you’ll want to travel to Williamsville for the full experience. Walk up to the counter, order a beef on weck sandwich and grab a seat. You’ll be able to watch the staff work in their open kitchen, craving each sandwich to order. Their rolls are not overly salted and stay crispy. Their meat is cut thicker than most but is served medium and tender. It might be the most popular place to visit for a beef on weck, but the hype is well deserved.

All natural roast beef smothered with horseradish, melted cheddar, or simply au jus! You can get creative with their bistro selections like Italiano, Greek or Mexicana. Enjoy traditional curly Q fries or fresh salads to compliment your meal. Top it off with their handmade ice cream and signature frozen custard.

Let’s start with the ‘menu’ at Swiston’s. It has two items on it. Yes, you read the right, two items on the whole menu, Beef on Weck and Homemade Chili. Their website even says, “Yep, that’s it.  If you do something really well, why would you do anything else??” Don’t worry, they also have a full bar with a pretty decent beer selection and free popcorn.  You don’t get a choice of temperature, but the beef is tender and piled high. It can be had on either a plain or weck roll. If you grab a seat at the bar you’ll be able to watch the cooks carve the beef and toast the roll on the spot. The sign outside hasn’t changed in decades, the dining room is incredibly simple and they still serve beer in large, thick glass mugs. The prices are affordable and the staff is quick and friendly, knowing many locals by name. Be prepared to adjust your eyes, the interior is dimly lit but comfortable. In the summer grab a seat outside and enjoy the sights and sounds of the canal on their large patio.

Located in the growing shadow of the quickly developing downtown medical campus, Ulrich’s Tavern has seen a lot over the last 140+ years. The Buffalo institution was recently been purchased by local lawyer Tom Eoannou who has a track record of successful renovations (North Park Theatre), has done another fantastic job with Ulrich’s Tavern. They’ve managed to capture the age and history of this German pub while at the same time keeping things modern. The original sign is still outside, the stained glass Iroquois Beer sign is still behind the bar and there’s plenty of exposed brick.

This quiet pub doesn’t have the typical Buffalo comfort foods; the menu is heavily influenced by German cuisine and they pair wonderfully with high quality imported European beers. However, we still love to pull up a seat at the bar and grab a beef on weck sandwich. The beef is sliced to order from a slow cooked prime beef and is served at the right temperature (rare). Served on a crunchy freshly baked kimmelweck roll and with a dollop of their house made horseradish, what’s not to love?

Sipping on a local beer in one hand (our suggestion is Flying Bison’s Rusty Chain, which is often on tap) and holding a beef on weck sandwich in another can really transport you back in time in this historic bar. Grab a seat in the newly added dining room, lined with large windows and you’ll get a view of Buffalo’s future.