Buffalo’s brewery and distillery scene is booming. The region now has 50 craft breweries, several distilleries and more on the way– nearly as many as in its pre-Prohibition days.

Five of these breweries and distilleries are located in Buffalo’s Larkinville neighborhood, an area enjoying its own revival.  With new restaurants, apartments, businesses and entertainment choices housed in a revitalized warehouse district, Larkinville is fast becoming an attractive spot for brewers and distillers to set up shop.

A tour of these fine establishments was on my Buffalo to-do list, and each place is in close proximity to one another, making it perfectly walkable.  And on a warm Saturday afternoon, I had no trouble at all recruiting fellow tour-goers. 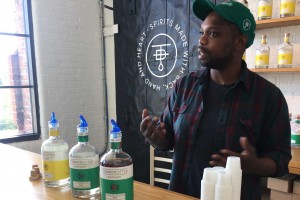 Tommyrotter Distillery, 500 Seneca St.
We went big and started our tour by sampling some spirits. If you’re not in the habit of tasting hard alcohol without a mixer or chaser, you’re in for quite an education.  Fred, assistant distiller and our tour guide showed us how to smell, sip and roll 122-proof gin around our mouths, savoring its unique and proprietary blend of botanicals.

Tommyrotter’s Cask Strength Bourbon-Barrel Gin won Double Gold and Best in Show in a New York World Wine & Spirits Competition. Their American Gin is one of the top-selling craft gins in New York State, and they’ve been featured in several nationally regarded publications – a pretty impressive resume for being only two years old.

Buffalo Brewing Company, 314 Myrtle Ave.
The folks at Buffalo Brewing Company have a deep love for what they do and the place in which they do it.  A true passion for their craft is what makes their beer so memorable. Choose from five “core” brews that are always on tap, or from a selection of “seasonal” beer.  Each is assigned a 4-digit number that (we quickly learned) commemorates a major event or milestone in Buffalo’s history.  They’re considered a “nano-brewery” and produce 2 barrels at a time or about 62 gallons per batch, by hand.  Try them a pint at a time ($5) or a flight of four ($10) or five ($12).  My personal favorite is the 1842 Vienna Lager, which also happens to be the year that the Dart Grain Elevator was invented and built. 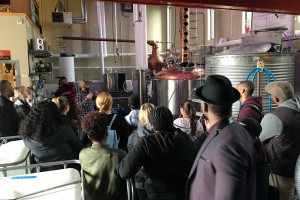 Buffalo Distilling Co., 860 Seneca St.
Buffalo Distilling’s start goes back to 1893; it was operational until 1918, before the beginning of Prohibition. A century later, this distillery had made a comeback in Larkinville; their menu has expanded and their spirits have matured into their signature brand, “One Foot Cock.” Now you can choose from a nice selection of craft cocktails or a flight of bourbon whiskey and apple brandy, followed by an in-depth tour of their distillery and historic space – the former home of a carriage manufacturer.

Flying Bison Brewing Co., 840 Seneca St.
The veteran Buffalo brewery on the block, Flying Bison originally opened its doors on Niagara Street in 2000. They outgrew that space and joined the Larkinville neighborhood in 2014.  We stepped out of our comfort zones and tried a few from their “Private ‘Stache” like “Down By the River,” a Belgian-style IPA and “Herc Strong Ale,” a really unique and delicious barlywine with an ABV coming in at 9.5%. The “Buffalo Kölsch 716” is a German style, incredibly refreshing and drinkable beer, only available in the summer – so you should probably stop whatever you’re doing and head to FBBC now. And the spacious tasting room, complete with complimentary board games, is the perfect space to spend an afternoon. 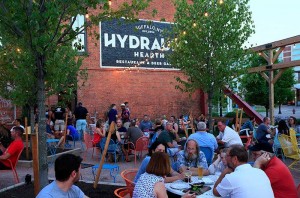 Hydraulic Hearth, 716 Swan St.
We hit up Hydraulic Hearth last for obvious reasons – delicious beer and wood-fire pizzas. The restaurant is home to Community Beer Works’ satellite brewery, so you’re certain to get plenty of fresh CBW favorites like “The Whale,” “Frank” and “That IPA.”  They serve about 10 other non-CBW beers as well as well as shandies and boilermakers.  Those along with some unique house cocktails made an appearance at our table, as well as 5 pizzas and a bunch of starters – the cheese fondue was an unexpected delight. Hydraulic Hearth also has one of Buffalo’s best beer gardens, complete with a shuffleboard court in the back.

Put on your summer bucket list a self-guided walking tour of Larkinville’s breweries and distilleries. You’ll have a new appreciation for the craft that helped shape Buffalo’s past and is breathing spirit into the city’s comeback.