Buffalo’s biking scene is booming. Miles of new bike paths and bike lanes are being added to the local landscape every year so there’s never been a better time to jump on your two-wheeler – or rent one if you’re visiting from out of town — and head on out. City, suburban or country – there’s a path waiting for you. Here’s our guide to six of the best. 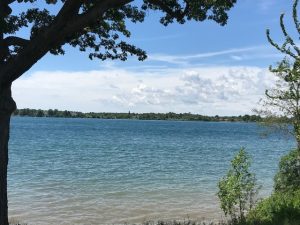 If you think any activity is enhanced by a water view, then Grand Island’s West Shore Bike Path is for you. This gem of a trail allows you to cruise along a flat, paved path right next to the Niagara River. You can enjoy views of Canada across the sparkling river, as you ride nine miles between Beaver Island State Park at the southern tip of Grand Island and Buckhorn Island State Park at the northern end. The two state parks are attractions in their own right. Beaver Island has all the trappings of a classic state park, including a beach, walking trails and picnic grounds. Restroom facilities are also available. Buckhorn Island is a nature preserve that provides protected habitat for many shorebirds. Designed for passive recreation, it has charms of its own, including hiking trails that take you to the river’s edge. Parks and water provide an unbeatable combination for a great bike ride. Get thee to Grand Island! 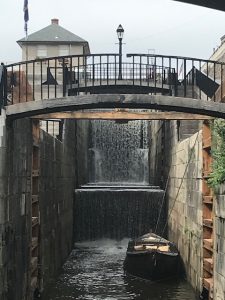 The Canalway Trail runs across New York State along the banks of the Erie Canal, as part of the Empire State Trail. Take advantage of this incredible amenity by riding the local portion, between Tonawanda and Lockport. The path is flat, composed mainly of crushed stone cinders, with some paved sections. It can accommodate most bikes. There are a few short portions of the trail on local roads, but there are decent shoulders, not much traffic and the route is well-marked. Gateway Park in Tonawanda is a great place to begin. Just follow the distinctive Canalway Trail signs. Awaiting is the peaceful shade of Ellicott Creek Park, canalside homes with tidy gardens and boat docks, lush farm fields, and the massive Pendleton Gate, used to drain the canal when repairs are needed. After many miles of peaceful, rural scenery, you begin to notice church steeples and other signs of urban life in the distance. You have arrived in the storied city of Lockport, home of the famous Flight of Five canal locks. Enjoy a stroll around the Locks District, treat yourself at a nearby café, and don’t be surprised if you find yourself singing about an old mule named Sal. 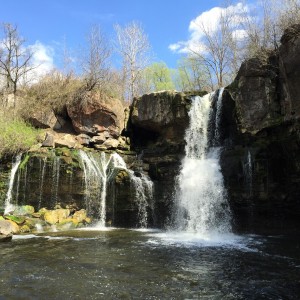 Choices abound if you decide to give the Clarence Bike Path a try. You can jump on the path at a number of places, as it crosses numerous roads along the length of its 17 miles. The path has two main portions, the West Shore Trail and the Peanut Line Trail.  Both names refer to former railroad lines that traversed the area and are successful examples of rails-to-trails conversions. They merge just shy of the Town of Newstead portion of the path, which ends in the Village of Akron. Wehrle Drive is the start of the West Shore portion of the trail, while the Peanut Line begins on Transit Rd. The path is flat and smooth and can accommodate all bike types. A mixture of sun and shade, suburban back yards and farm fields provide the backdrop. About two miles after the trails merge, you will glide to a stop on Cedar Street in Akron. This is a delightful place in which to take a spin around the streets or visit a restaurant for a reward after your ride. If you are feeling ambitious, Erie County’s Akron Falls Park can also be visited. Just remember to save some energy for the ride back! 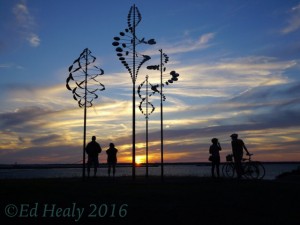 This once industrial neighborhood has been transformed from desolate to destination – with thousands of outdoor enthusiasts using it daily during Buffalo’s glorious summer months. For bicyclists, it’s a particularly appealing place to get close to the water and away from traffic. There are plenty of places to start, but we recommend parking near Buffalo Riverfest Park on Ohio Street and peddling to the Outer Harbor. This route adds an elevation change over the CSX rail yards on the way out and back, but otherwise it’s smooth sailing on a well-maintained asphalt path that winds its way along the water’s edge, near Tifft Farm Nature Preserve and by what was once known as the Saskatchewan Cooperative grain elevator. Be sure to check out the very Instagrammable wind sculptures at Wilkeson Point and, when it’s open, the historic 1833 Lighthouse that lies at the very end of Fuhrmann Boulevard adjacent to the Coast Guard base. The Queen City Bike Ferry makes this route into a loop, conveniently connecting the inner and outer harbors and eliminating any need to retrace your path.

The popular Ellicott Creek Trail runs about seven miles one way. You can begin on either North Forest Rd. or from Ellicott Creek Park on Niagara Falls Blvd. You will encounter people running, roller-blading, walking and pushing strollers, as well as many families with young children out for a ride. The path is quite wide in most places, though, and can accommodate everyone. It is a paved asphalt trail, without any notable elevation change, and good for all bike types. The path follows Ellicott Creek, as it winds its way through Amherst. You will encounter a mixture of straightaway sections that pass behind office parks, as well as curving, tree-studded portions of the trail that provide a feeling of solitude. There are a few picturesque bridges that cross the stream, and plenty of Canada geese to keep you company. You can take in the sights of the University at Buffalo campus, including Lake LaSalle with its iconic white marble columns on Baird Point. Dappled sunlight, sparkling water and the cool shade of many trees along this section make for a very relaxing ride at any time of day.

Following the rail bed of the former NY & Erie Railroad for nearly six miles, this is one trail with two names: The North Buffalo Rails to Trails and the Tonawanda Rails to Trails. Confusing? A little, but well worth the ride. Start your journey at the LaSalle Metro Rail parking lot off Main Street in North Buffalo. The city portion of the path runs briefly alongside Shoshone Park before heading into the suburbs. It crosses several streets (all equipped with button-activated crossing lights that bring traffic to a halt) along the way – including a stretch of Sheridan Drive that’s within sniffing distance of three of Buffalo’s preeminent food establishments: Anderson’s Frozen Custard, Paula’s Donuts and Ted’s Hot Dogs. Stay strong and carry on. Eventually, you’ll cross Tonawanda Creek on a massive former railroad trestle and head for Fillmore Avenue, a quiet stretch of road with a bike lane that runs for about a mile before you reach Gateway Park and the banks of the Erie Canal. Grab a seat in the shade, watch the kayaks and motor boats come and go and give thanks to the rails to trails movement that made this lovely ride possible! 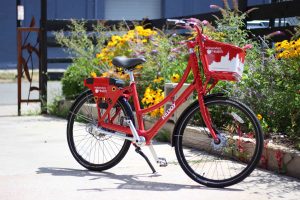 Some supporting information and photos by Ed Healy 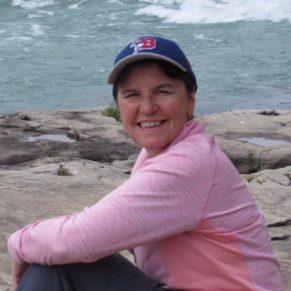 Eileen is proud to call Buffalo home and enjoys all the area has to offer in every season. Biking, hiking, and cross-country skiing are some of the ways she likes to experience our fantastic natural heritage when away from her job working on clinical trials at Roswell Park.