Wherever you fall on the spectrum of interest in lighthouses—simply curious? Obsessed and on a mission to visit every single lighthouse in the country? The chance is here for you to visit the new and improved Buffalo Lighthouse.

The non-profit site at on the Buffalo Outer Harbor is in the process of refocusing your visit there to emphasize the site’s historic aspects. Mike Vogel, president of the Buffalo Lighthouse Association and current informal holder of the title “keeper” of the lighthouse says, “This is where Buffalo got started, and we want to tell that story.”

For Vogel, the deep general appeal of lighthouses is a romantic combination of their physical location, and their purposes. “If there is magic anywhere, it’s at the border between water and land,” he said. “Lighthouses, at that border, are a symbol of welcoming sailors home to safety and to safe harbor; they also beckon them to begin their voyage.”

There is also nostalgia, another reason that the often-unique coastal architectural structures are revered and sought out; modern technology has replaced the classic lighthouse. 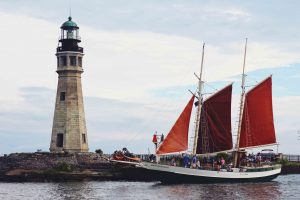 The newer lighthouse, which is still standing today, was officially completed in 1833. It’s made of limestone, and, from a 20-foot base, it tapers up to a 12-foot diameter at its lantern room (which received a new Fresnel lens in 2016!).

Vogel, who is also secretary of the United States Lighthouse Society (uslhs.org), added that after years of running the site at no cost to visitors—asking only for voluntary donations—the decision has been made to request that visitors purchase a day pass. ($4 general admission; free for kids under 12 and active and retired military). Common practice at hundreds of sites around the country this helps defray the costs of preserving the historic structures. The lighthouse is also officially located on land leased from the Coast Guard.

Along with these changes also come benefits for visitors. 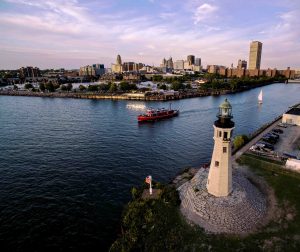 The Buffalo Lighthouse’s newly expanded site features a gatekeeper. After you sign in, the gatekeepers offer a preview of the experience: you may walk the 1,500 foot path out to the lighthouse, as well as enjoy a small visitor’s center. Along the walkway, there is plenty of new interpretive signage, as well as nautical and lighthouse-related artifacts, including a bottle light from one of the breakwaters, a 1930s bell buoy, some anchors, and a working 1933 fog bell which visitors of all ages are invited to ring.

In the visitor center, videos include those on how lighthouse lenses work, and a virtual climb of the tower for those who might not be able to physically make it up the 50 stone steps and three ship’s ladders (another 17 rungs). If you do want to take the climb, volunteers are there to guide you up. They’re also trained in site history, and eager to chat and answer any questions you might have. 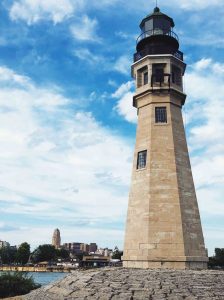 For more information, visit Buffalo Lighthouse on Facebook, at buffalolight.org, or download the free app on iTunes.