Located a short drive from downtown hotels, the Elmwood Village is a great place to stroll. You’ll find one of the city’s most vibrant neighborhoods, anchored by Elmwood Avenue and surrounded by charming, tree-lined streets filled with elegant turn-of-the-century homes. 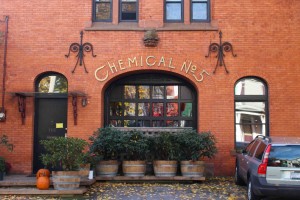 Starting Out: The tour begins in the heart of the Elmwood Village at the corner of Elmwood Avenue and Cleveland Avenue. As you set off east on Cleveland you’ll immediately come across the Chemical No. 5 Firehouse. This striking building has been adapted for use as a residence and is one of the few buildings in Buffalo with Art Nouveau details. The station was originally built to accommodate horse-drawn fire-fighting equipment.

Turn right on Tudor Place, a street of beautiful turn-of-the-century mansions. Go left on West Ferry Street, so named for the ferry that once took travelers across the Niagara River to Fort Erie, Ontario. 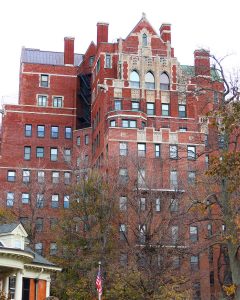 To your left, you’ll notice one of Buffalo’s most impressive apartment buildings, 800 West Ferry. Built in 1929 by Darwin R. Martin, 800 West Ferry is a luxury apartment building that remains one of Buffalo’s most fashionable addresses to this day. Constructed just before the stock market crash of 1929, the building’s unfortunate timing meant financial ruin for its underwriters, including the developer’s father, Darwin D. Martin, the man who brought Frank Lloyd Wright to Buffalo and whose foundering fortunes would soon thereafter force him to abandon the Wright-designed Martin House forever.

Turn left on Delaware Avenue and pass the gracious campus of Canisius High School, which numbers the late television journalist and best-selling author Tim Russert among its graduates. It was on this site, in the long-demolished Milburn House, that President William McKinley died after being shot at the Pan-American Exposition of 1901. 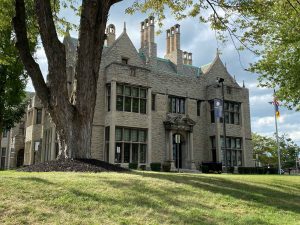 Continue north on Delaware to Gates Circle, one of many traffic circles that are a part of Buffalo’s Frederick Law Olmsted-designed parkways. The circle’s ornate light standards and fountain originated on the drawing table of E.B. Green, the man responsible for many of Buffalo’s greatest landmarks, including the 1905 building of the Albright-Knox Art Gallery.

Walk along the western rim of the circle and proceed to your left down Chapin Parkway, one of the city’s most gracious avenues. Named in honor of Col. Edward Chapin, who was killed during the Civil War, Chapin Parkway is a street of impressive homes dating from the early 20th Century, including an example (at No. 121) of work by Esenwein and Johnson, one of Buffalo’s most notable local architectural firms from its turn-of-the-century heyday. 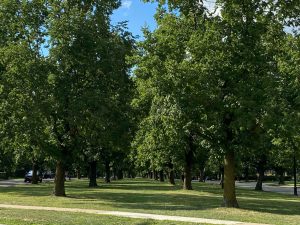 At West Delavan go left and make a slight detour to the beautiful homes and gardens. These Victorian homes are known for their spectacular gardens and are considered one of the highlights of Buffalo’s annual Garden Walk.

Return to Chapin Parkway and continue left to Soldier’s Circle. As you make your way around the western perimeter of the circle, you’ll come across another of Buffalo’s many Frank Lloyd Wright buildings. Built in 1905 for William R. Heath, a colleague of Darwin Martin at the Larkin Soap Company who also took a chance on the still relatively unknown Wright. The Heath House is best known as a stylistic precursor to Wright’s renowned Robie House in Chicago. 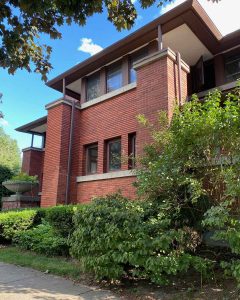 Moving around the circle, the street to your left is Lincoln Parkway, another Olmsted contribution to Buffalo’s streetscape featuring truly lavish mansions. Cross Forest Avenue and continue to the rear of the Albright-Knox Art Gallery (closed until late 2022), home of one of the great collections of modern and contemporary art in the world. Across the street you’ll find Shakespeare Hill, the site of one of the largest free outdoor Shakespeare festivals in the country, held every summer from June through August, as well as a lovingly-maintained rose garden that’s worth a stop. If you’re feeling hungry, stop at the Terrace restaurant for lunch or dinner and an outstanding view of Hoyt Lake.

Continue on Lincoln Parkway and then take a left on Iroquois Drive and go left again on Elmwood Avenue. From here you’ll get an up-close view of the expansion of the Albright-Knox and the clock tower of Rockwell Hall to your right on the campus of Buffalo State College. 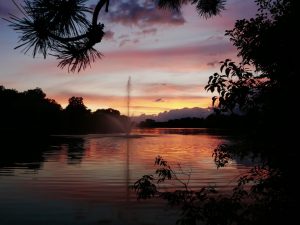 Cross Elmwood Avenue at Rockwell Road, a corner that features the Burchfield Penney Art Center, considered one of the finest regional museums in the United States. The museum houses an outstanding collection of the work of Charles Burchfield, the legendary landscape artist and watercolorist who made Buffalo his home for many years, as well as many other outstanding regional artists.

Walk down Rockwell Road for approximately a quarter-mile before taking a left. Up ahead you’ll see the National Historic Landmark Richardson-Olmsted Campus. Designed by Henry Hobson Richardson and constructed between 1870-1896, the former Buffalo State Hospital features grounds by Frederick Law Olmsted. Built of locally quarried red Medina sandstone, this was Richardson’s first major commission and contains many of the elements that characterized what came to be known as the Richardsonian Romanesque style. 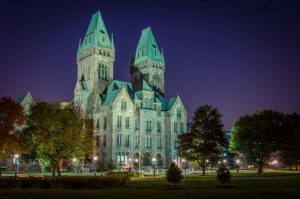 Walk through the opening under the towers and cross the great lawn before proceeding to the light at the corner and crossing Forest Avenue. Walk down Richmond Avenue to Dorchester. Turn left onto Dorchester, a gem of a street that will connect you to Bidwell Parkway. Named for local Civil War hero Daniel Davidson Bidwell, Bidwell is home to a farmer’s market from May through October and a regular schedule of concerts throughout the summer months in non-pandemic times. Go left at Bidwell and then right onto Elmwood Avenue.

Continue south on Elmwood and window shop your way back to our starting point at Cleveland Avenue. You’ll pass a variety of restaurants, coffee shops, cafes and boutiques. Walk and gawk and enjoy the urban amenities of a neighborhood that was named one of the Top Ten Great Places in America by the American Planning Association in 2007.