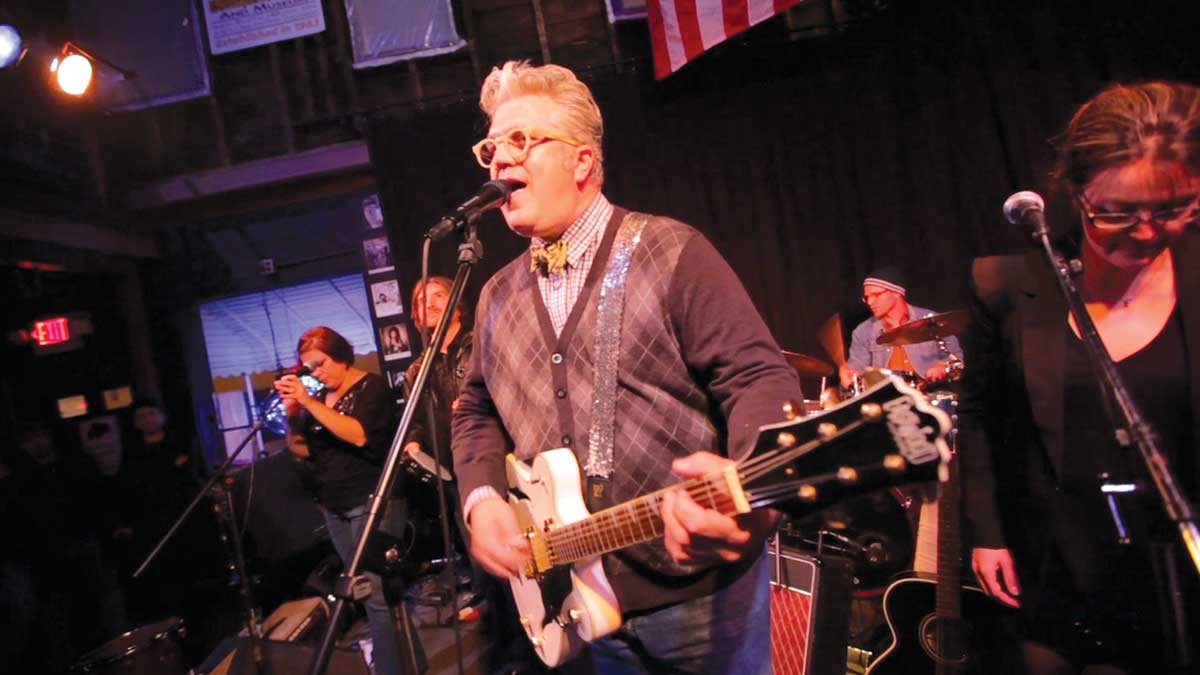 In its early years, Black Rock was its own village just north of Buffalo, rivaling its southern neighbor for economic prominence. It wasn’t until 1853 that Buffalo annexed Black Rock; over 150 years later, this neighborhood still retains its own distinct charm. From classic taverns and diners to a religious artifacts museum, innovative restaurants and the “honkiest tonkiest beer joint in town,” the businesses of Black Rock reflect its unique character and history. 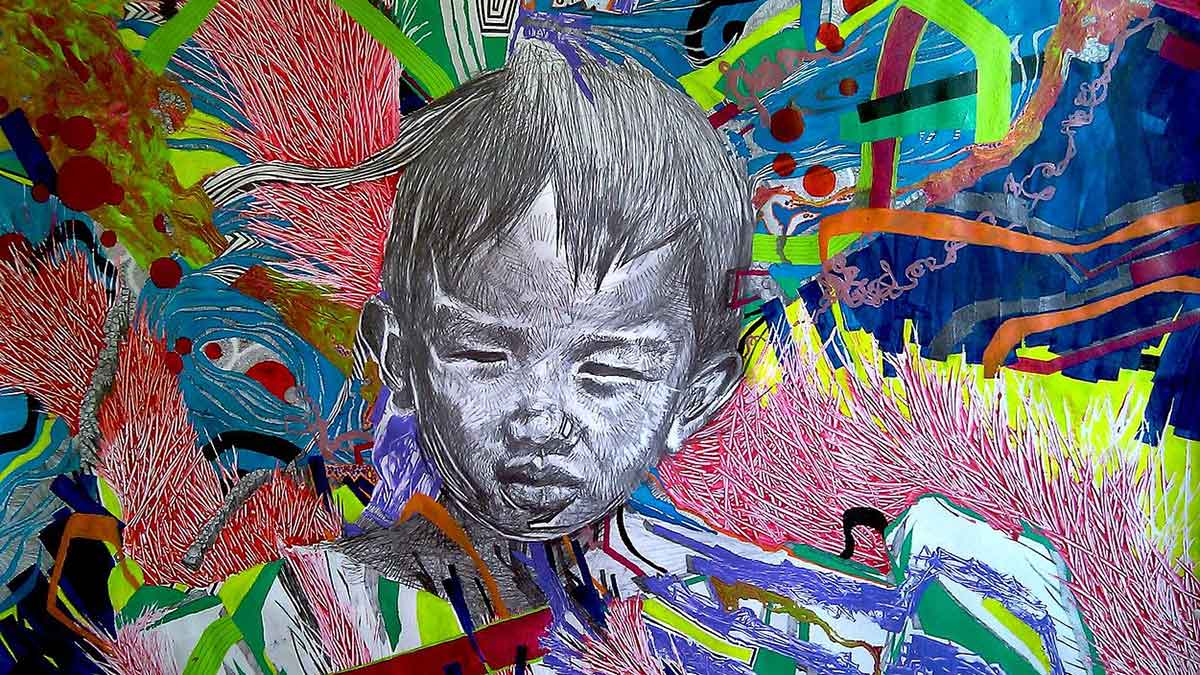 I can’t think of a better metaphor for Buffalo’s resurgence than the latest developments on Chandler Street. Located near the Black Rock neighborhood this literal dead-end street was an industrial site for years. Now, the renovation of two warehouses turned this once industrial strip into the beginnings of a brand-new neighborhood for the next generation of Buffalo’s business owners and hotspot seekers. 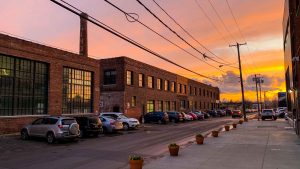 It’s hard to call a place that’s gotten so much ink lately a hidden gem, but that’s exactly what it feels like. It’s a sanctuary tucked inside a concrete jungle. The two buildings on the receiving end of a recent facelift house a salon, a gym, and tech firms, but the main attraction is a joint venture by popular local establishments Tappo Restaurant and Thin Man Brewery. And right across the street is the Buffalo Cider Hall. 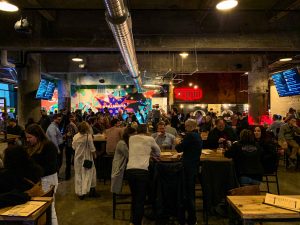 The space that houses the Tappo/Thin Man mashup has all the industrial features you’d expect from garage doors to exposed HVAC, but the vibe is anything but standard. The walls are covered with bright murals that are supremely ‘grammable, and the sound system provides low-key background music from the likes of Junior M.A.F.I.A. and Wu-Tang Clan. Dart boards, skee-ball and foosball tables round out the makings of a relaxed weekend hangout.  It’s meant to cater to a younger crowd, but it’s an all-ages sort of place frequented by residents of the surrounding neighborhood. And if you grew up in the 90s you’ll be right at home.

Thin Man brews on site and the bartenders pull suds from nine different tap handles. The list includes IPAs, brown ales, ciders, and their signature fan favorite Pills Mafia. Tappo compliments the beer selection perfectly with their wood-fired pizzas.  Like any respectable Buffalo bar you can get wings, but the pretzel bites are a must-order. 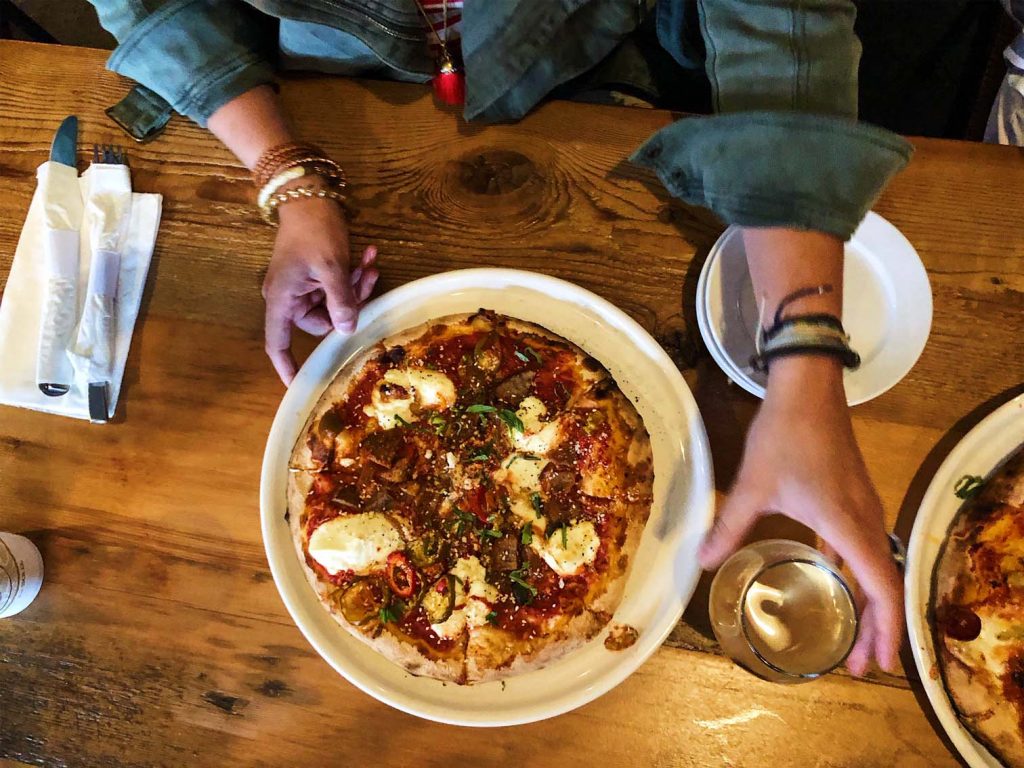 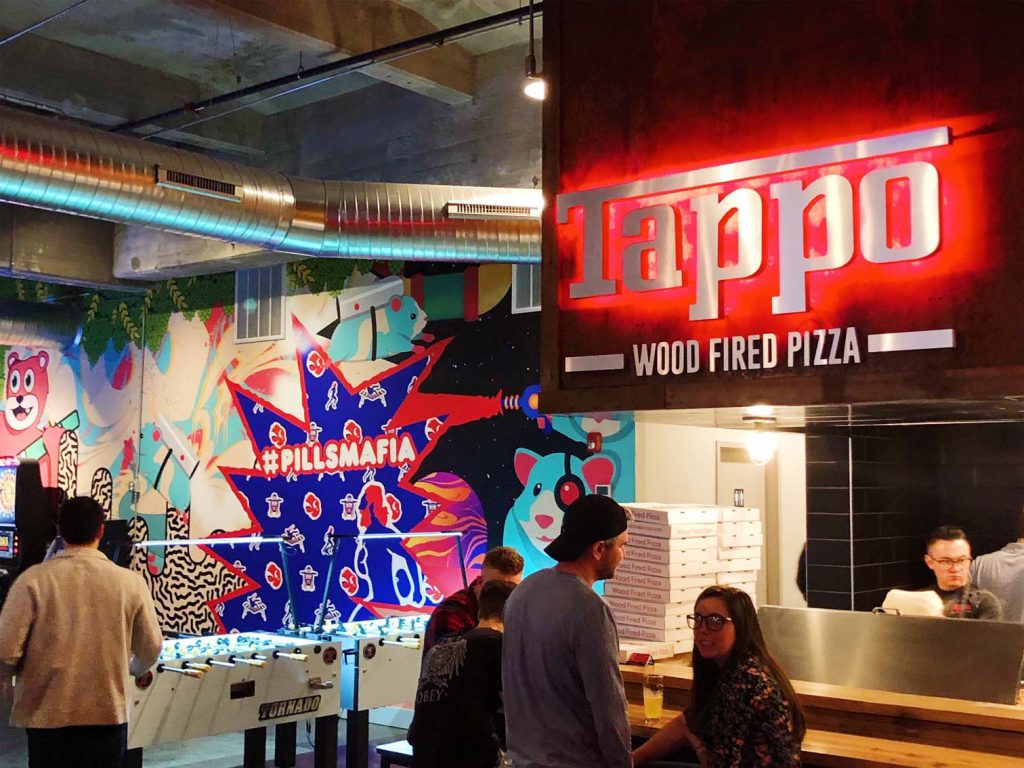 Across the street is BlackBird Cider Works’ Buffalo Cider Hall where you can sample from their list of 12 ciders. Make sure you try their Chandler Street Cherry. Beer drinkers need not worry, there’s a selection from local breweries to keep you lubricated. BlackBird takes the whole “urban oasis” thing literally with a patio that looks out onto a thick green lawn, adorned with public art by local muralist Chuck Tingley, that’s set to host bocce ball leagues and impromptu picnics, probably. 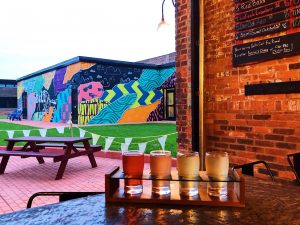 The most exciting part is that this is all just the tip of the iceberg. The coming months and year will see the opening of a second brewery, Barrel + Brine’s sandwich shop, a new co-op restaurant project from some of Buffalo’s most talented chefs, and Chandler Street Pool Club. You heard right. They’re putting in a dang pool club, y’all!  Season and day passes will be available and the line starts behind me. Apartments are scheduled to go in along with business incubators for 30 different food vendors.

So not only will it be a hotspot for local food and drinks, it’s got the makings of its own self-contained district.  As you look out onto the street from Thin Man’s patio you can practically see crowds of people drawn to this gem by a festival or concert; bopping from cider hall to pool club to brewery. You can feel the pent-up energy as you walk the street. Buffalo is about to take another big step forward, and it’s next hip neighborhood may be here sooner than you think. 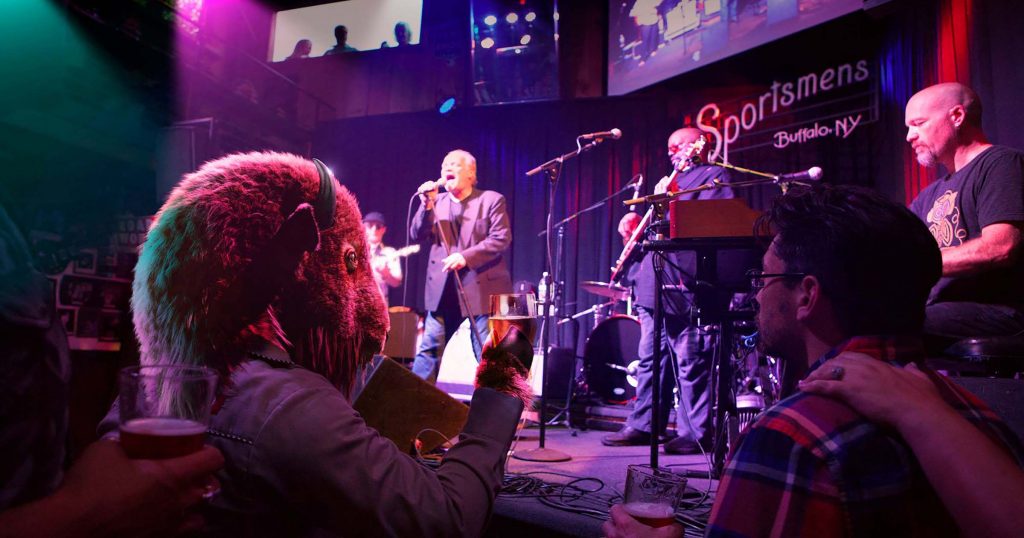 You probably know all about Buffalo’s most popular destinations for knocking back cocktails.  There’s Chippewa – the original entertainment district – if you’re looking for a dance party, the Elmwood Village if you need something a little more low-key, and Allentown if you want to hang out with the hippest crowd in town.  Look, there’s no wrong answer here.  Pick any one of these hot spots and you’re going to have a good time.  But if you’re looking to change-it up a little bit, there are plenty of other crawl worthy strips, streets and avenues to suds it up here in the Queen City.

One of the best might be Amherst Street.  This runway of fun (funway?) stretches from Elmwood Avenue all the way to Military Road.  It’s peppered with bars and restaurants up and down both sides of the street. On a recent Sunday, I grabbed a couple friends and did the hard work of figuring out exactly how to tackle this boulevard of boisterousness.  Here now is your roadmap to success: 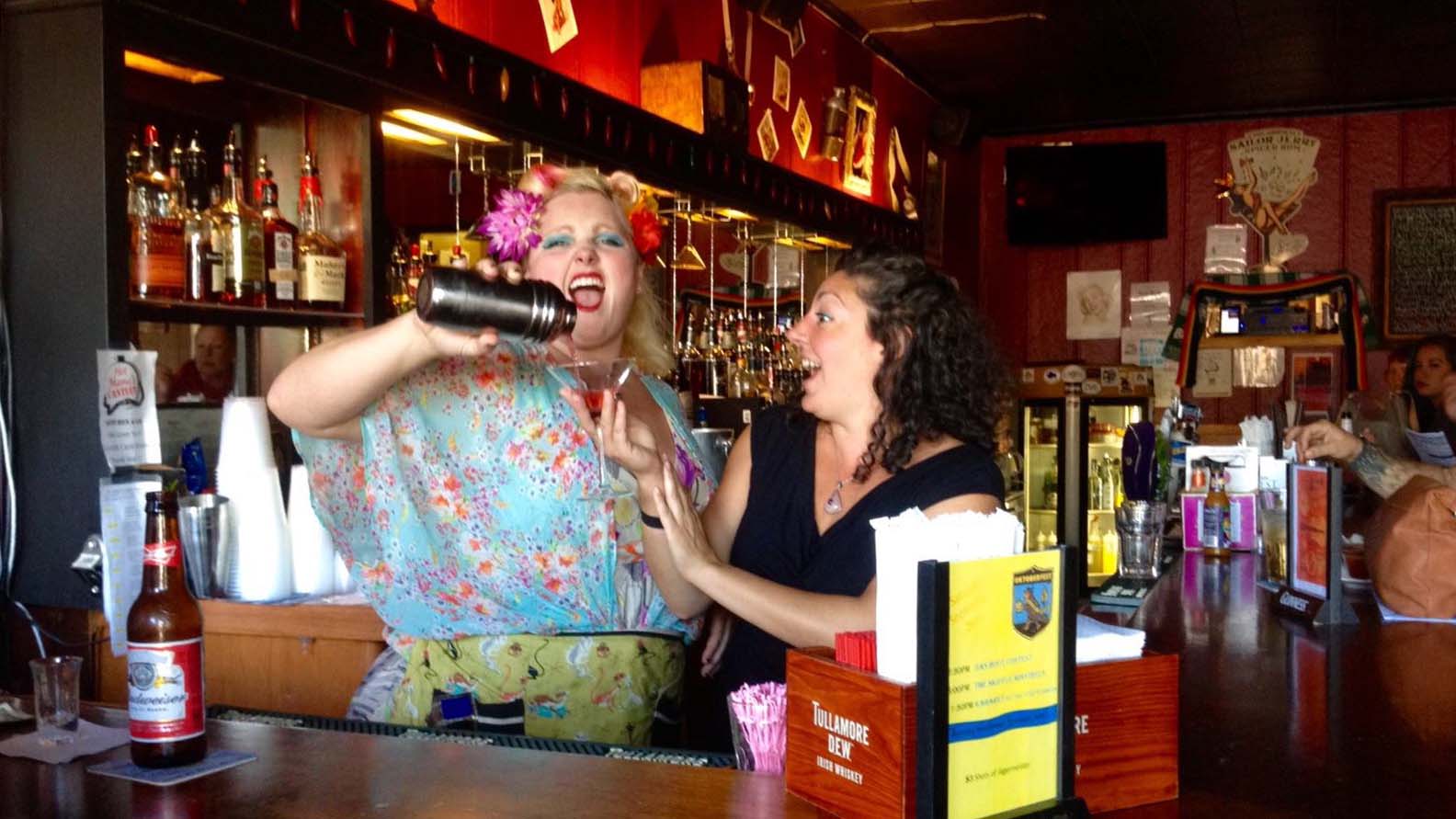 Hot Mama’s Canteen, 12 Military Rd. (at Amherst):
Start at this former speakeasy that’s doing everything it can to live up to its name and its history including hosting a monthly burlesque show and sprinkling cayenne and red pepper on the complimentary popcorn.  This place is oozing with character.  There’s real dart boards, a shuffle board, a ghost in the basement, and throw a party to celebrate the end of Prohibition. 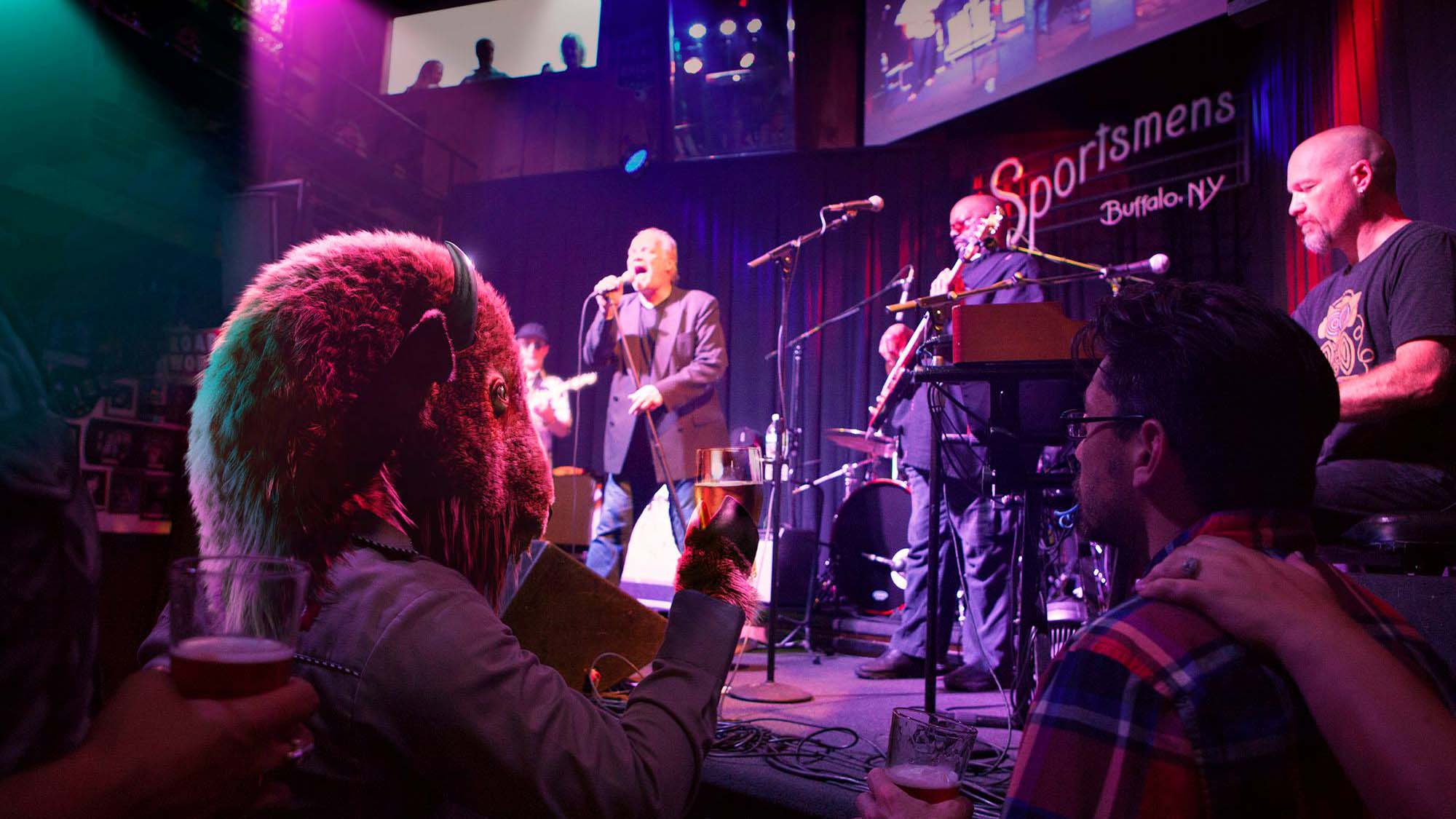 Sportsmen’s Tavern, 326 Amherst St.:
If Amherst Street has an anchor, this is it.  Sportsmen’s Tavern is well known among the locals for its live music.  Touring artists and bands from all over the country swing through to play a show on the Sportsmen’s stage.  Climb the stairs to the second floor for a bird’s eye view of the nightly performances. 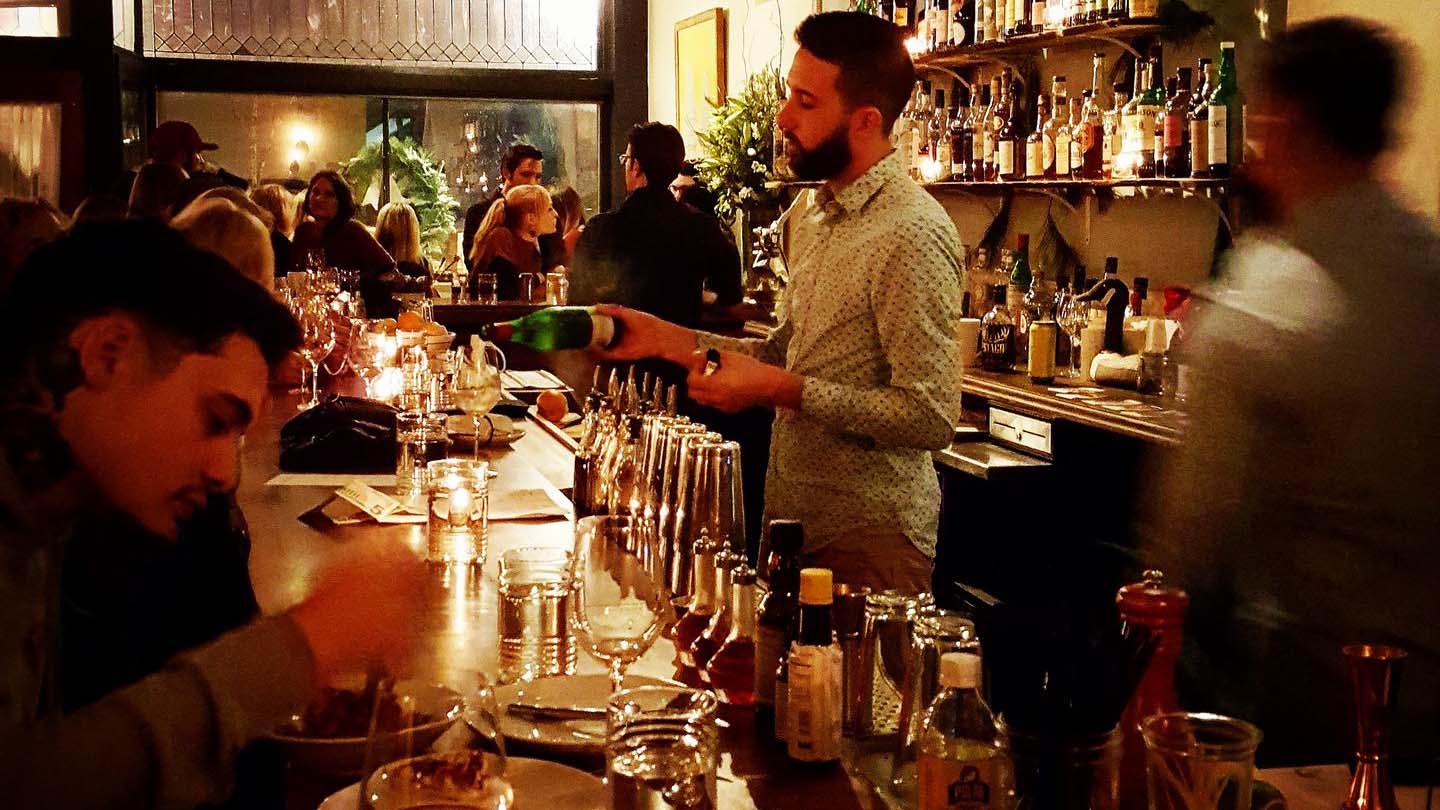 The Dapper Goose, 491 Amherst St.:
If you’re more “craft cocktail” than “shot and a beer,” the Dapper Goose is the spot for you.  It hits all the millennial high notes with a killer brunch menu, farm-to-table dishes, locally sourced booze, and a patio that rivals the best in the city. 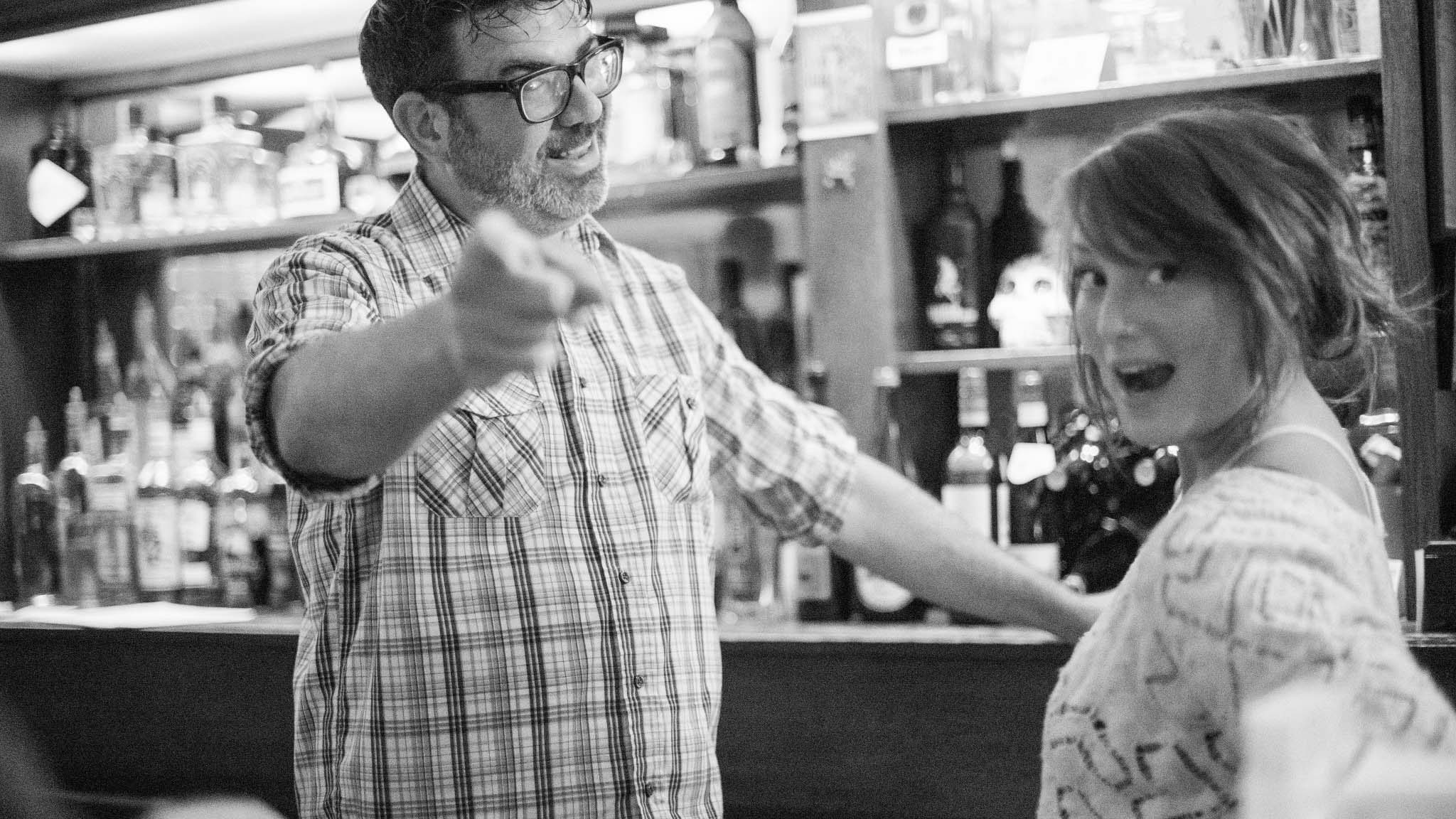 Rohall’s Corner, 540 Amherst St.:
Rohall’s is an old school bar tucked neatly into the Black Rock neighborhood.  The interior features a glass block wall in the entry way and a retro collection of branded barware and signs including a Utica Club neon in the front window.  There’s a long list of European beers on tap and in half liter bottles.  You’ll find beers from the Ukraine and Croatia on the list as well as local and regional favorites.

Voelker’s, 686 Amherst St.:
You know how a lot of bowling alleys have bars in them?  We’ll I’m pretty sure Voelker’s is a bar with a bowling alley in it.  This place is a rite of passage for locals.  You haven’t lived until you’ve rolled a few games and downed a few drinks under the glowing green neon at the corner of Elmwood and Amherst.  If you’re not a bowler, pull a stool up to the bar for dirt cheap drinks.  Voelker’s is the kind of place where one drink turns into a day-long affair.  So, clear your schedule and be prepared to Uber it home at the end of the night.
•••••

So, there you have it.  Next time you’re in need of new scenery head to Amherst Street, where there’s a watering hole for everyone.