The festival tribute to Buffalo’s delicacy that a movie inspired

The Buffalo Wing Festival is a two-day Labor Day weekend affair with two decades of history and a culinary tradition of offering wings from about 25 different places. Come Saturday and Sunday, Sept. 3 and 4, and taste unique spins on Buffalo’s classic delicacy from all over the country – from Carolina barbecue with a vinegar tang to a hot southwestern Arizona style, lemon pepper and garlic parmesan.

“The Wing Fest has those traditional wings, but is also very creative for something different, something new. It’s like going to an ice cream place with 30 different flavors as opposed to just vanilla, chocolate, strawberry,” said Drew Cerza, the festival founder who was nicknamed Wing King by celebrity chef Bobby Flay.

All about the Wing Fest

Taste the latest flavors at the festival’s new Orchard Park location at Highmark Stadium, where the Buffalo Bills play. The event averaged 50,000 attendees per year in the last decade. Visitors have come from all over the U.S. and 44 foreign countries. As the crowds swelled, the festival adapted.

“When we started, we actually used turkey fryers and then evolved to donut fryers and then to actual deep fryers,” said Cerza. “We’ve gotten better and better with our processes over the years. So, we can serve faster.”

Cerza, who had a career in food marketing and supermarket promotions, created the festival after a Buffalo News columnist wrote suggesting that someone start one based on a scene in the movie “Osmosis Jones.” In it, a junk-food-eating father character, played by Bill Murray, tells his daughter he’s going to the Buffalo Wing Festival, which, at the time, was fictional and nonexistent.

“They have shown us the way. We are fools if we don’t follow,” Donn Esmonde wrote.

Cerza agreed. “I just decided to do it. There was no manual. I just had to figure it out and put it together,” he said. “You never know what to expect. You just try to survive each year. My goal was to make this the Super Bowl for the chicken wing industry. We definitely accomplished that. We’ve become the epicenter for chicken wings around the country. Everybody loves it. Everybody loves chicken wings. Everybody loves Buffalo.”

When, where and how much?

The two-day festival at Highmark Stadium in Orchard Park starts at noon. On Saturday, Sept. 3, it closes at 9 p.m. and on Sunday, Sept. 4, the day ends at 7 p.m. Daily entry tickets cost $20. Kids 8 and under are free. Parking is free. More info at buffalowing.com.

Proceeds go to FeedMore WNY and the Western New York Chapter of the Alzheimer’s Association. “To date we’ve raised over $420,000 for local charities,” Cerza said.

Collect more memories, and souvenir pennants and bumper stickers, before and after the festival by signing up for Visit Buffalo Niagara’s Wing Passport. Check in at the wing places along the Chicken Wing Trail and win prizes. Make three stops, win a signature orange I-love-wings bumper sticker. Seven stops, halfway, are enough to earn a free t-shirt. Finish all 14 for a limited-edition pennant by Oxford Pennant. Then you can hang news of your achievement — “I got saucy on the Buffalo Wing Trail” — on the wall for all to see. 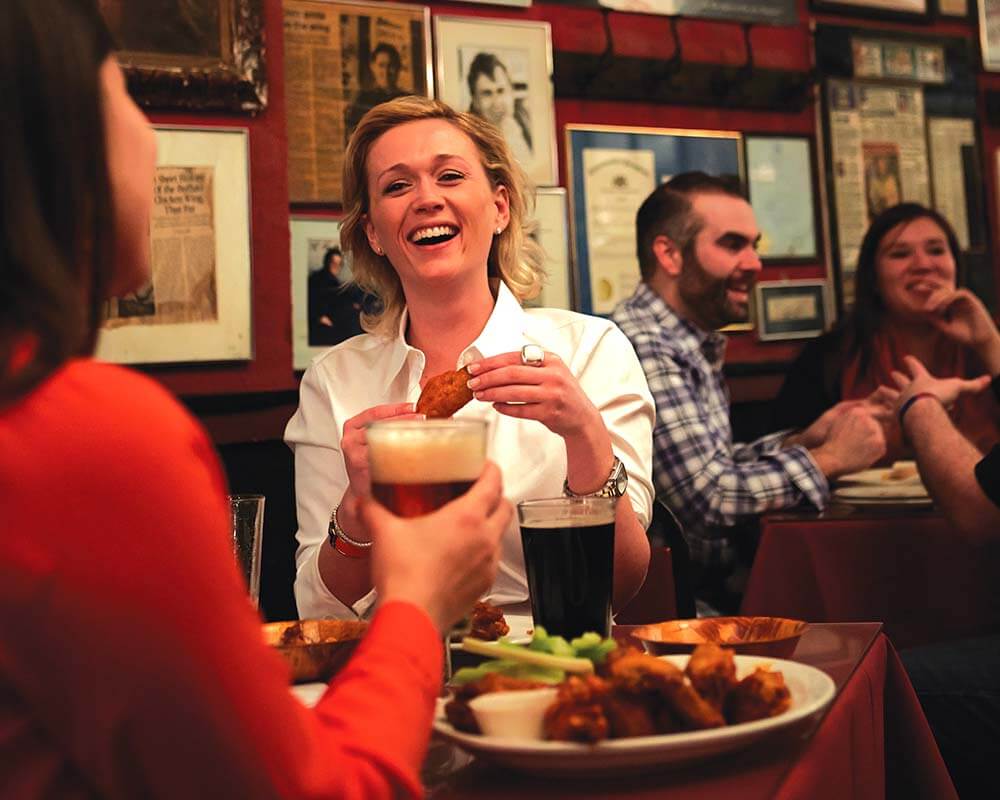 Q&A WITH THE WING KING