Before the chicken wing, Buffalo was a haven for another iconic American food – the hot dog.

And few other hot dog joints have left their stamp on Buffalo cuisine more than Louie’s Foot Long Hot Dog.

Not to be confused with Louie’s Texas Red Hots, Louie’s Foot Long Hot Dog has served Western New Yorkers chargrilled franks since 1951 when Louis and Josephine Turco opened a stand at the corner of Sheridan and Grand Island Boulevard in Tonawanda.

The stand has been in business longer than big names that include McDonald’s, Burger King, Arby’s, Wendy’s, Subway and Kentucky Fried Chicken. 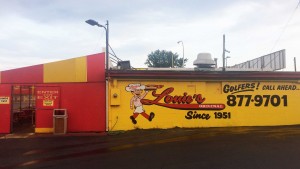 Louie’s claim to fame is the foot-long hot dog, a concept he cooked up to set his stand apart from Ted’s Hot Dogs and other restaurants in the area. Using another classic Buffalo hot dog brand, Sahlen’s, he paired the 12-inch dog with hand-cut curly fries and milkshakes made from real ice cream.

Louie’s Foot Long Hot Dog expanded to several locations around Buffalo, but after Turco’s passing, only the original stand at Sheridan and Grand Island Boulevard (69 Grand Island Boulevard, Tonawanda) remained until the opening of another location on Niagara Street a few years ago. The business is still family-owned, managed by Turco’s son, Angelo, and daughter, Debbie.

Decked out in red and yellow, Louie’s is full of charm and features cartoon images of the restaurant’s namesake along the walls and menu. Angelo greets customers with the same friendliness that his father was known for.

Although the menu has grown to include a variety of hot dogs, burgers and sandwiches, Angelo recommended the classics to me: their signature foot-long with “the works” – a mix of mustard, ketchup, relish, chopped onions and crisp pickle spears – and a generous serving of freshly-cut curly fries.

Like his dad, Angelo also has a knack for crafting twists of common foods. Several years ago, he made the restaurant’s first batch of loganberry ice tea.

At first a little skeptical, I took Angelo’s word and tried the unorthodox mix. The beverage was, surprisingly, a perfect blend without either of the flavors overpowering the other – it’s not a 50-50 mix, in case you were wondering.

I enjoyed my dinner on one of the many picnic tables outside the stand. After finishing my meal, it was obvious why Louie’s has been a Buffalo mainstay for generations. The food is affordable and crafted with an attention to detail that is difficult to find at other burger and hot dogs stands, and the customers are treated like family.