Buffalonians love charbroiled hot dogs. That’s right, hot dogs cooked over glowing coals are as much of a Buffalo food icon as deep-fried wings, beef on weck sandwiches and Friday fish fries. But in the case of hot dogs, there’s only one local brand that will meet Buffalo’s exacting standards for the kind of smoky, satisfying flavor that says summertime, picnics, tailgating and tradition and that’s the one that’s been around for 152 years and counting – Sahlen’s.

“It’s a staple of almost every family growing up,” said Mike Eckert, Brand Marketing Manager for Sahlen’s. “Summertime at the baseball diamond, family gatherings in backyards and grilling out. It’s really a time-honored tradition. It’s one of the foods you remember as a kid and that sticks with you. It’s a memory and a feeling that is passed down from generation to generation.” 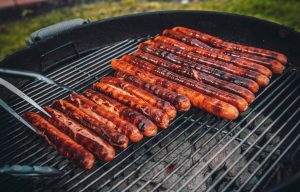 Can you smell this picture? We can.

It’s a tradition that’s been passed down on the production side as well. Joseph Sahlen founded the company in 1869 when Buffalo was a boomtown and tens of thousands of hungry new residents and proximity to the Erie Canal and railroads made starting a business here a no-brainer. Sahlen located his business in East Buffalo near the rail lines that gave him easy access to the farms and livestock that provided the ingredients for his sausages, hot dogs and bologna.

Remarkably, that little start-up dating from the time Ulysses S. Grant was President of the United States is still in business on the same site and is still owned and operated by the same family – making Sahlen’s one of the oldest hot dog – if not the oldest — manufacturers in the country. Of course, Joseph Sahlen probably wouldn’t recognize the expanded storage facilities, modern machinery and loading docks his heirs have added over the years as the family business grew and prospered. 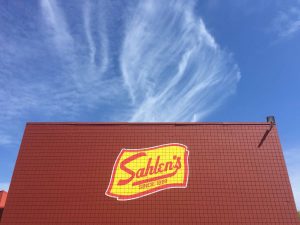 The company long ago expanded beyond Western New York and today Sahlen’s hot dogs are sold throughout the Eastern United States, into South Carolina and Florida, the Midwest and as far away as Las Vegas and Phoenix. In fact, if you lay all the hot dogs Sahlen’s produces per year end to end, they would stretch for 850 miles, nearly all the way from Buffalo to Atlanta. But Buffalo has always been home to its most passionate customers.

“We became very entrenched in the community in the late ‘90s,” Eckert said. “In fact, one of Joseph Sahlen’s (the founder’s great-great grandson) first jobs was driving our grill truck to different events in the area. We wanted people to try the hot dogs, so if they were at fundraisers, charity events or baseball fields, we were there. Eventually, we started seeing people demanding the product at stores and the rest is history.” Only Sahlen’s hot dogs at Ted’s!

You can find Sahlen’s hot dogs at supermarkets throughout Western New York and grill them yourself, but the best introduction to a genuine, charbroiled Buffalo-style foot-long is at the counter of one of our classic roadside stands such as Ted’s, Anderson’s, Old Man River, Mississippi Mudds, and Taffy’s, prepared by an experienced grill master who knows exactly how to poke and prod the dog so the casing splits just right and then tops it off with some combination of mustard, relish and pickles.

“There are so many great foods that have come from Buffalo and we are happy to be one of them,” added Mike Eckert. “We hear stories all the time of people beyond excited that we’ve started selling in the city they’ve moved to. Or folks that have turned their neighbors onto our hot dogs for summer gatherings. It’s nice to know we can have such a positive impact on people’s lives with something as simple as a chargrilled hot dog.”