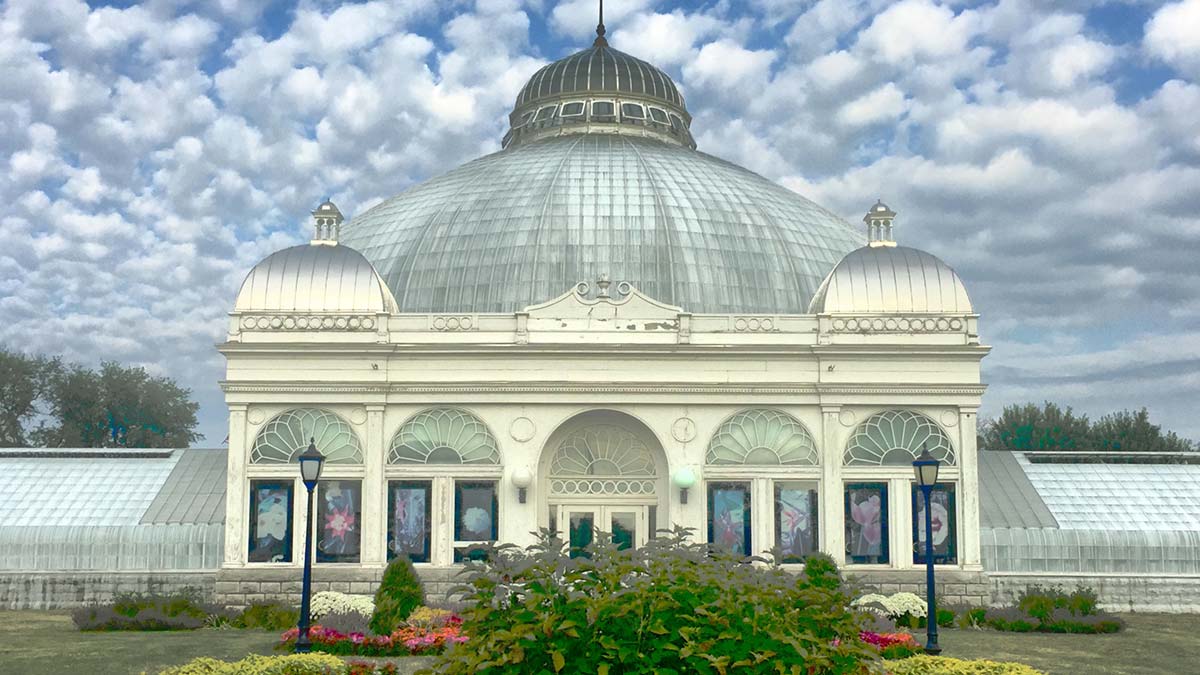 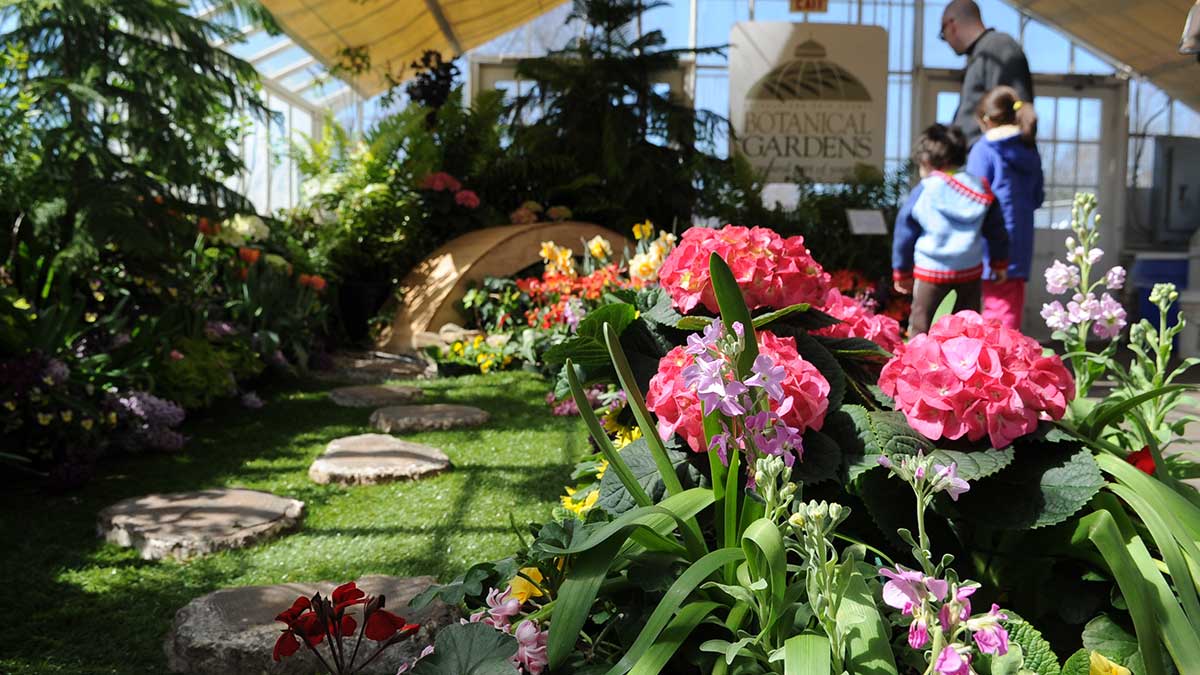 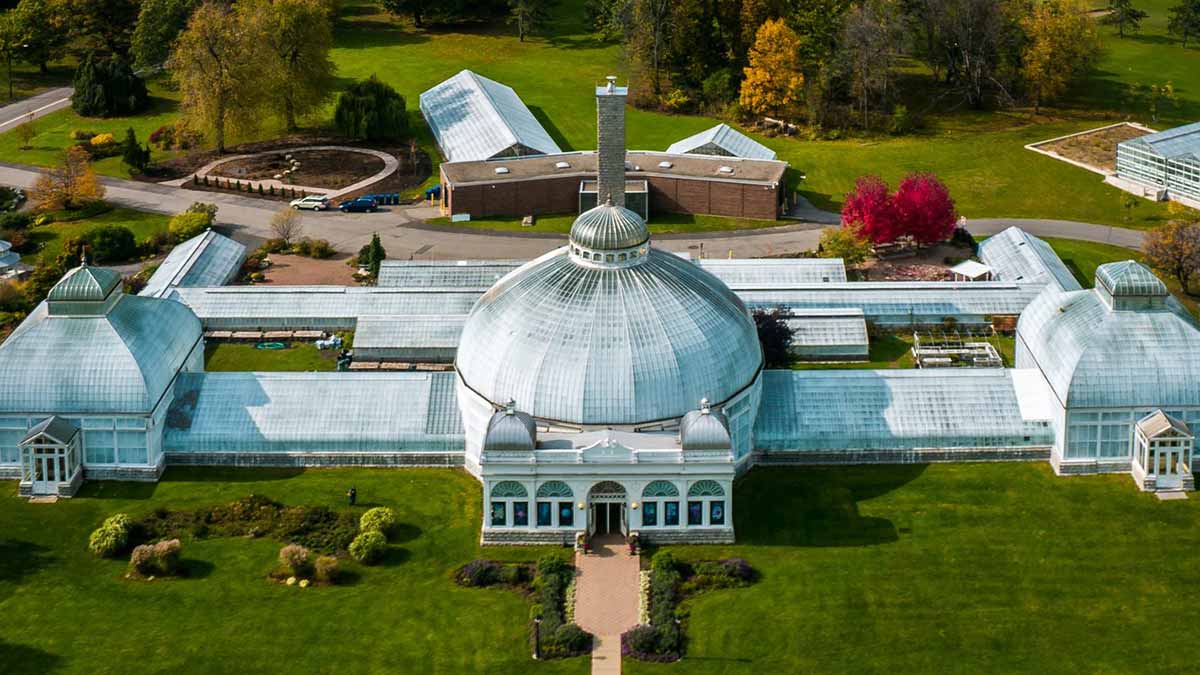 Frederick Law Olmsted’s design for Buffalo’s South Park included a conservatory and surrounding formal gardens. In 1894, Professor John F. Cowell was appointed as the first Director of the conservatory. He gathered plants, trees and flowers from every corner of the world and his expertise and guidance allowed for many successful years for the conservatory.

While South Park was being constructed, Lord & Burnham Co. was busy designing the South Park Conservatory. The tri-domed Victorian design was modeled after the beautiful Crystal Palace in England and was built by a Buffalo construction company, George P. Wurtz & Son, of wood, glass, iron and steel for a total cost of $130,000. Upon opening in 1900, the conservatory was the third largest public greenhouse in the United States and was ranked as the ninth largest in the world. The South Park Conservatory continued to grow throughout the early 1900s and six greenhouses were added in 1907.

In 1929, the City of Buffalo considered demolishing the conservatory due to poor management, low attendance and structural disrepair. Fortunately in 1930 federal funding became available to help repair the conservatory, which allowed Lord & Burnham Co. to completely renovate the deteriorating building. The structure was rebuilt to withstand the blustery Buffalo winters and heavy pollution from the steel mills close by.

Over the years, interest in the Gardens waxed and waned, but saw a considerable uptick in the 1950s. In 1977, the conservatory was damaged during Buffalo’s infamous blizzard; however a passionate group of citizens and volunteers helped save it, resulting in the creation of the Buffalo and Erie County Botanical Gardens Society, Inc., which sparked public interest with school tours and by showcasing the horticultural treasures to the community.Erie County purchased the conservatory and 11.4 surrounding acres within South Park from the City of Buffalo for $1. The name was changed to the Buffalo and Erie County Botanical Gardens.  In 1982, the Botanical Gardens was listed on the New York State Register of Historic Places.

Over the years, extensive renovations and upgrades have been made, including restoration of many of the gardens, replacement of the outdated heating system, renovation of the main palm dome and greenhouses and more.

Today, the Buffalo and Erie County Botanical Gardens attracts more than 100,000 annually to enjoy the amazing architecture and the indoor and outdoor garden sanctuary.  It is a gathering place where visitors can find peace and harmony and enjoy the simple power of the natural world.

In 1849, Frederick A. Lord began building greenhouses for his neighbors in Syracuse.  They were so impressed with his wood and glass structures that Lord decided to make this a full-time business. He moved to Eastern New York State and began building greenhouses for many of the large estates along the Hudson River. In 1872, his son in law, William A. Burnham, joined the firm and throughout the 1870s and 1880s, Lord & Burnham Co. built conservatories throughout the country, becoming the premier conservatory designers of the time. The Buffalo and Erie County Botanical Gardens is still considered one of Lord & Burnham Co.’s greatest accomplishments.

Warm Yourself with These “Souper” Soups Around Buffalo

The Best of Visit Buffalo Niagara in 2021

Ways to Ring in 2022 Buffalo-Style

Warm Yourself with These “Souper” Soups Around Buffalo

The Best of Visit Buffalo Niagara in 2021

Ways to Ring in 2022 Buffalo-Style