Being an integral hub of industry in the late 1800s and early 1900s, Buffalo benefitted from an influx of entrepreneurs, immigrants, innovators, designers, trailblazers, and, most evident today, architects, all looking to leave their mark in the City of Light. One such architect, drawn to Buffalo after befriending a prominent local businessman, was none other than Frank Lloyd Wright.

On the heels of other revered architects and designers like Louis Sullivan, H.H. Richardson and landscape designer Frederick Law Olmsted, Frank Lloyd Wright began his Buffalo portfolio with the construction of the Martin House, completed in 1905. But as Architectural Digest discovered in a recent feature, Wright’s legacy in Buffalo stretches even further. 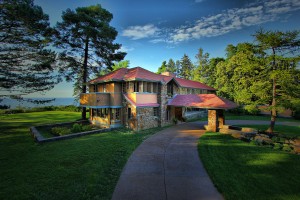 “While Wisconsin and Arizona are the locations typically associated with Wright’s work, it’s in Buffalo, of all places, that architecture enthusiasts can find a plethora of his work,” Kristine Hansen writes for Architectural Digest.

Focused on sites open to the public, AD toured five of the seven Wright sites in and around Buffalo – the Martin House, Graycliff, the Filling Station at Buffalo Transportation Pierce Arrow Museum, Fontana Boathouse, and Blue Sky Mausoleum. But seeing is truly experiencing. We invite you to tour Frank Lloyd Wright’s Buffalo for yourself.