With the everyday entertainment taking place at Buffalo River Fest Park and Elevator Alley Kayak, the massive and lively excitement of Buffalo RiverWorks, Resurgence Brewing’s second location, a massive rock climbing gym, and two new apartment buildings, the Buffalo River is booming like it hasn’t been in decades.  While many think to go to Canalside and head out onto Lake Erie by water bike or kayak, I chose to head  the other direction down the river on a narrated boat cruise offered by Buffalo River History Tours.  And on this particular warm and sunny Sunday afternoon, I was not alone – the boat was sold out with people wanting to venture 90 minutes down the river’s path.  Now with a new boat in the Buffalo harbor boasting a capacity of 145 people, Buffalo River History Tours’ Harbor Queen can accommodate a group of any size.  The touring company offers several 90 minute rides up the river each daily, as well as a lengthier ride that stops for a walking tour of the grain elevator collection known as Silo City. 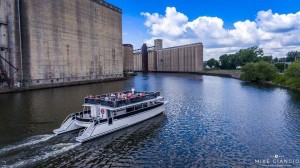 I loved the leisurely ride, feeling the breeze against my face and listening to the history of the river before me.  History buff or not, this ride is enjoyable for all ages to learn about Buffalo’s industrial heritage and recent progress; the tour provides spectacular views of Buffalo’s towering grain elevators and new waterfront developments.  Here are the top 6 interesting facts I learned on this tour:

1. The Buffalo River is actually not a river – it’s a creek (the Buffalo Creek to be exact).  To accommodate for the booming industry along its shores, the creek was expanded on both sides and deepened to 35 feet.

2. The grain elevators are the strongest they’ve ever been.  Turns out, concrete doesn’t completely cure until about 100 years after it’s poured.  Now more than 100 years old, Buffalo’s grain elevators (one of the largest such collections in the world) are now stronger and sturdier than ever!

3. The largest grain elevator on the Buffalo River used to store 4.5 million bushels of grain per year.  That’s enough to make a loaf of bread for every person in the United States! 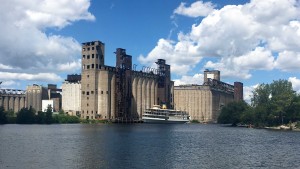 4. The Edward M. Cotter (the world’s oldest working fireboat that docks along the Buffalo River) can fill an Olympic pool with water in 11 seconds (a random factoid, but one of my favorites.)  The famed fireboat is as impressive in practice as it is in sight.

6. Thanks to the cleanup efforts of many local organizations including Buffalo Riverkeeper, the native vegetation of the land—such as birch trees—is being restored.  This restoration is helping to rebuild the the formerly industrial river’s ecosystem.