The Buffalo region is bursting with history.  Over the years, there have been historic inventions (the pacemaker, grain elevator and air conditioner, to name a few) and feats of engineering and planning (like the completion of the Erie Canal and Frederick Law Olmsted’s urban park system).  There are also lesser-known happenings, personages and locations that deserve to be known.  We’ve rounded up the down-low on a few of those under-the-radar highlights.

A Presidential Assassination Site
A plaque, mounted on a medium-sized rock on Fordham Drive near Delaware Park, marks the actual spot where our 25th president was assassinated.  Six months into his second term, President William McKinley was shot point-blank in the abdomen by a self-described anarchist.  It was 1901, and the president was here during one Buffalo’s triumphant times: the Pan-American Exposition, an epic world’s fair.  Millions of people traveled here to see the wonders of electric lights, incredible exhibits and entertainment.  As McKinley stood in a receiving line, Leon F. Czolgosz hid his gun under a handkerchief (you can see the gun at the Buffalo History Museum)—the unsuspecting president reached to shake hands, and Czolgosz shot him.  McKinley died eight days later from an unbeatable infection.

The stars in Forest Lawn Cemetery
The first person was buried in Forest Lawn in 1850.  Since then, approximately 161,000 interments have taken place.  Amongst those are several well-known names, including Shirley Chisholm (1924-2005), who, in 1968, became the first African American woman elected to the United States Congress.  Funk music star Rick James (1948-2004), a Buffalo native, is buried here.  Of course, Alec Baldwin-lookalike Millard Fillmore (1800-1874) was buried here; he was a former resident of nearby East Aurora, and the country’s 13th president. 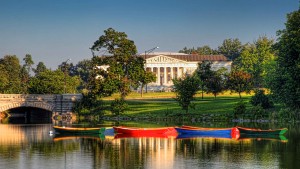 The Buffalo History Museum building: a Pan Am Expo survivor
William McKinley may not have lived through the Pan American Exposition, but many don’t realize that The Buffalo History Museum is housed in the only building intended to last beyond the historic 1901 extravaganza.  The graciously proportioned building, which served as the New York State Pavilion during the seven-month event, was the sole structure on the 350-acre fairgrounds that was constructed out of stone, instead of pre-fab plaster.  Set in Delaware Park above the Japanese Gardens and Mirror Lake, the building, as BHM Executive Director Melissa Brown likes to say, is the museum’s “best artifact.”

Buffalo & Erie County Public Library’s Mark Twain Room
Samuel Clemens, aka Mark Twain, the beloved American author and humorist, spent a few years in Buffalo—he married Olivia Langdon, a woman from nearby Elmira, and with her father’s help purchased a share in the Buffalo Express newspaper.  Though the couple’s son was born here, in November of 1870, their time in Buffalo wasn’t all joyous—his wife’s father and her friend both died, and then she herself took sick.  They left Buffalo and ended up in Hartford, Connecticut.  But we still remember him fondly.  The room at the library features ephemera (including the original Adventures of Huckleberry Finn manuscript) and letters, as well as Clemens’ steamer trunk and the mantle from the house he lived in.