Experience the beer boom that is taking Buffalo by storm! The City of Buffalo is home new and long-time favorite breweries spread across Downtown Buffalo and to diverse communities throughout the city. Craft beer is a leading catalyst of our local resurgence!  So stop by our Visitor Center at the corner of Washington & Clinton Streets and chart your course for these craft breweries that should be on your radar: 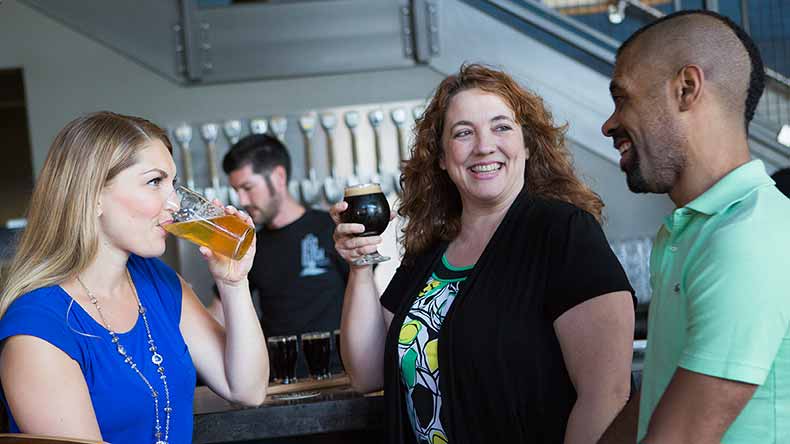 1. Big Ditch Brewing Company
In the heart of downtown Buffalo lies a brewery known for it’s vibrant space honoring the spirit of the Erie Canal. Big Ditch has a penchant for nailing the formula of what makes a great beer (which is why they won New York State’s Best Craft Brewery award at TAP Festival in 2016). As the company was founded by two former biotech scientists, that should be no surprise.

2.  RiverWorks Brewery
As the waterfront of Buffalo experiences a once-in-a-lifetime revitalization, it’s no wonder the local breweries want to take part in the action. Occupying an already stellar multi-season sporting complex next to the magnificent grain silos along the Buffalo River, the brewery is actually IN a re-purposed grain silo and allows those enjoying the river to boat up and enjoy a frosty pint.

3. Community Beer Works
Born out of a love for the beer, Community Beerworks has cemented their place among the brew legends of Buffalo. You could say they’re one of the veterans of this recent beer boom. Always on point, CBW crafts consistent staple beers like Frank Pale Ale and Amazing Larry Cream Ale in addition to niche brews like the Pun Intended Gose.

4. Resurgence Brewing Company
Dwelling in an area that harkens back to the industrial heyday of Buffalo, Resurgence Brewing lives up to their namesake. With the notion of transformation in mind not only has Resurgence crafted classic Buffalo flavors into beers like Loganberry Wit and Sponge Candy Stout, but they’ve converted a rugged space into one of the most beautiful beer gardens around.

5. Lafayette Brewing Company
Opened in 2012 and located in the fully restored Hotel @ The Lafayette, this brewery is located in the basement of the historic hotel and sports a full spectrum of six house brews and four changing seasonal brews made exclusively for the bar.

6. Thin Man Brewery
Local beer connoisseur, Mike Shatzel, has finally brought a brewery into the idyllic community of the Elmwood Village. So as you stroll through the shops and boutiques that dot Elmwood Avenue, you can stop by Thin Man to sip on a revolving list of taps and grab a bite from their unique food menu.

7. Old First Ward Brewing Company
Lovingly named after the community it resides in, this brewery’s ties to the Irish heritage of the Old First Ward are strong. Located in the same building as Gene McCarthy’s restaurant, sample beers such as Red Clover Irish Red Ale and St. Patrick’s Pilsner over a steaming plate of their famous wings and patiently await the rumble of passing locomotives on the nearby railroad.

8. Flying Bison Brewing Company
Flying Bison is the pioneer of Buffalo’s craft beer renaissance. Made famous for their brews, like Rusty Chain Vienna-style beer and Aviator Red Irish Ale, they’ve got a knack for creating some experimental brews, too. Partake in a flight when you visit their brand new tasting room in the always-fun Larkinville district. 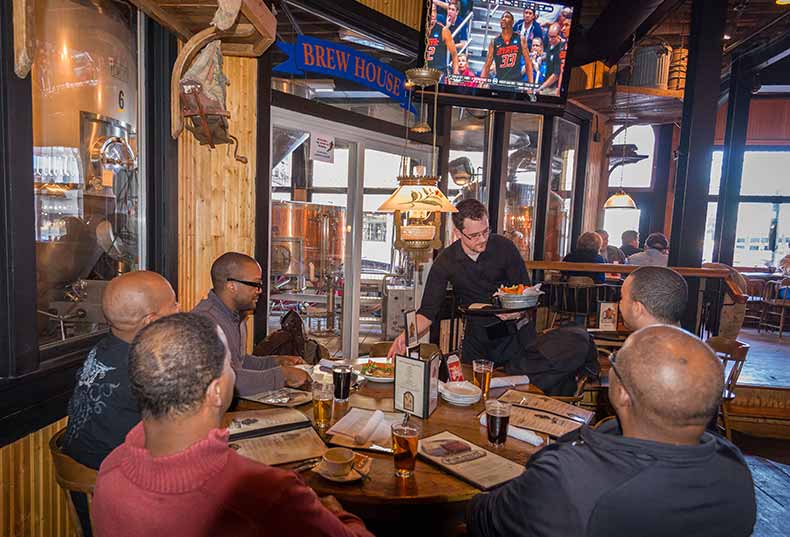 10. Pearl Street Grill & Brewery
Before or after a game downtown, Pearl Street is the go-to stop for classic Buffalo grub and a frosty pint of any of the brewery’s rich beers – from the Lake Effect, an East Coast-style pale ale, to the Trainwreck, a complex German-style amber. And if you’re with a group of your closest pals, Pearl Street makes it really easy to share their delicious brews – from the 100oz. Widow Maker to the monstrosity that is the 180oz. Annihilator tube.