The sun rises on East Buffalo – a community with a renewed sense of hope and purpose. At 17 square miles, it is the city’s largest neighborhood, large enough to contain many smaller neighborhoods.

Since moving to Buffalo from downstate as a preschooler in 1967, I’ve lived in several of those neighborhoods. There are still sights, sounds and smells that ignite a rush of the past for me, like when we lived in the shadows of the Wonder Bread factory on Fougeron Street, where the smell of fresh bread baking saturated the air.

Jefferson Avenue, a tasty destination for good eats, was bustling with businesses. Wistfully, I inhale the heavenly, intoxicating aroma of John Young’s Wings and Things doused in mambo sauce or a Scottie’s Steak House hoagie.  I remember walking to War Memorial Stadium for Buffalo Bills games lovingly guided by my dad, holding my hand.

Our next move was to Hamlin Park, now a National Historic District dating back to developer Cicero Hamlin in 1858. In the 1950s, middle- and upper-class Blacks began purchasing homes in this area with a dream of overcoming racial injustice.

As a curious 10-year-old, I rang the doorbell of trailblazing architect Robert T. Coles. I mistook the ultra-modern home and studio he designed and built as a museum amongst the neighboring vintage Humboldt Parkway dwellings. His kind wife, Sylvia, greeted me, delighted to hear why I was at their doorstep. After revealing it was a residence, she still invited me in for a tour. Looking in my rearview mirror, it really was a museum.

In 1982, my family purchased a home in the Kensington-Bailey (South) area, east of St. Gerard’s Parish. A few years after college, I migrated to North Buffalo where I lived for 23 years until I had the opportunity to reclaim and revitalize the beautiful home I had left behind on East Buffalo.

My vision was move in, flip it and move on after two years. But things changed. I fell deeply in love with the results of the restoration project and the folks around me. My neighbors are amazing, spirited people. I’ve met retired teachers, principals, law enforcement personnel, attorneys, business owners, civil service workers, and human resources and marketing professionals.

Predominantly African-American, East Buffalo is far more diverse than it once was, with a growing number of new Americans — Yemenis, Bangladeshis, and Southeast Asians. My Muslim neighbors and their families walk to the former St. Gerard’s Parish for prayer, now a mosque. God bless America!

Photo by East Side Garden Walk

As a ReTree volunteer who is highly active in my block club, I’ve planted scores of trees — my neighbors have affectionately nicknamed me “The Tree Lady” or “Johnny Appleseed.”  An avid gardener, for the past two years I’ve participated in the East Side Garden Walk. To date, my 2020 Gardens Buffalo Niagara video continues to reign as their most viewed.

The Bennett-Wells American Legion Post and Auxiliary #1780, just a couple blocks away from my home, is a pillar of my community. After World War II, Blacks returning to Buffalo were not welcome to join existing American Legion posts, so they established their own in 1946. I enjoy the camaraderie, the stories and the unwavering support of veterans. They fund student scholarships and distribute holiday food baskets. It’s a cozy space brimming with kind, patriotic people who love this country.

Sadly, many Buffalonians from other neighborhoods rarely explore East Buffalo – when we have so much to offer. We take great pride in annual summer happenings in Martin Luther King, Jr. Park, part of the historic Olmsted Park System: the Juneteenth celebration, Pappy Martin Legacy Masten Jazz Festival and Pine Grill Reunion. Each offers visitors an abundance of good times.

East Buffalo is also home to the Queen City Jazz Festival at the Colored Musician’s Club in the Michigan Street Heritage Corridor, the African American Cultural Center, Torn Space Theater and the Buffalo Museum of Science, which attracts thousands of families each year. Other signs of hope and renewal include the facelift of the Buffalo Central Terminal and the towering mural of civil rights activist John Lewis by artist Edreys Wajed. Not to be forgotten — East Buffalo’s roster of immaculate, palatial churches is unparalleled.

Neighborhoods are more than a collection of people. While this neck of the woods has its struggles, East Buffalo is a diverse mishmash of independent communities with distinct character and history. It’s home to thousands of hearts, minds, and experiences. Many residents in my neighborhood could easily opt for suburban living, but they choose to stay. I also live in this multifaceted neighborhood by choice, inspired by the words of American novelist, literary critic, and scholar Ralph Ellison who wrote movingly about the “complexity of humanity.” 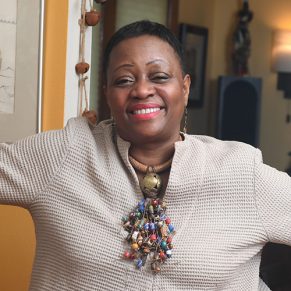 Renata Toney is a Marketing Communications Manager at the Burchfield Penney Art Center who loves art, gardening, and laughter but despises cold cereal. A community-builder, her donation of time and talent throughout her career to various organizations that boost Buffalo is far-reaching.