With some riffs on “the classics” a bit of whimsy, and a whole lot of taste, Waxlight Bar a Vin opened its doors on Chandler Street and is among the newest and coolest spots among the Buffalo restaurant scene.

Waxlight started as a vision shared by five friends in the food and drink industry. After late nights discussing what works and what doesn’t, and a mutual love and passion for creating memorable dining experiences, Waxlight Bar a Vin was born. The collective goal is to offer food that’s approachable and vaguely familiar, with a menu that steers toward comfort mixed with contemporary, French-influenced cuisine.

The restaurant is owner-operated which means guests have access to chefs, managers and sommeliers throughout their dining experience.  If you want to know what’s happening in each dish or which wine will pair with your meal, an expert can talk you through process, ingredients and flavors. 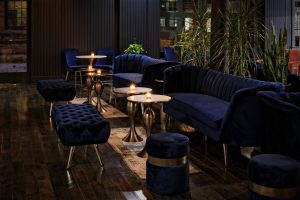 The co-owners behind the vision include Chef Joe Fenush, a Buffalo native who studied under master chefs and a James Beard nominee before returning to Buffalo in 2015 to open Toutant as chef de cuisine. Chef Edward Forster has been cooking since he was 16 and has worked in London, Philadelphia, New York, and Chicago. He decided that the time was right to bring his high intensity and creative flavor back to Buffalo.

Jessica Railey and Tony Rials are Waxlight’s certified sommeliers. Jessica, an 8-year industry vet owned and managed Vera Pizzeria in its first 2 years of business, and most recently was the general manager and sommelier at Toutant and Dobutsu. Tony’s experience is wide-ranging, from working in Michelin-starred restaurants to remote jungle settings, which helped shape his creative process.

Jeffrey Yannuzzi has spent time in nearly all front of the house positions over his 15-year career. He’s furthered his education in beer, wine, and spirits through the Cicerone certifications program and the Court of Master Sommeliers.

At an early Saturday dinner, my dining companion and I enjoyed some small plates, drinks and desserts couch-side in the lounge, which was perfect and cozy and everything you’d want on a chilly Buffalo evening. 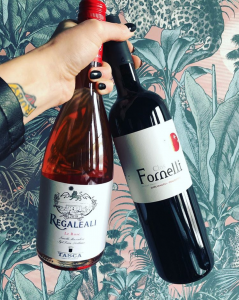 The wine program at Waxlight includes some classics as well as varietals with plenty of fun, funky, and esoteric options, all carefully chosen to pair well with food. The selection focuses on small, family-owned-and-operated producers that use sustainable methods in the vineyard and in the cellar.  You’ll also spot some New York favorites from the Fingers Lakes, and soon from the Niagara Peninsula.

The wine list is categorized by style and body type (light & fruity reds, highly refreshing whites, fruit & floral) and is designed so that guests can find wines they love to drink, while being introduced to something new at the same time. Price points are reasonable – they vary from $8 per glass to $165 per bottle. 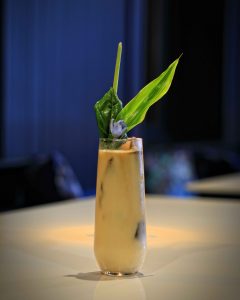 Cocktail creations at Waxlight take their cues from the kitchen. A syrup made from scratch might be used at the bar for a cocktail, the fruit solids will be used in a dessert and then as a fruit compote in an entrée. As the kitchen continually adjusts their ingredients and menus, the bar program follows suit. An interesting selection of Old and New World beers are also offered.

We tried a “classic riff” on an Old Fashioned. Made with pineapple skin, eucalyptus and aged rum, it was fresh-tasting and balanced with just enough sweet and tart flavors.

Ask the Waxlight team and they’ll tell you that the mocktail revolution has been building over the last several years. With that in mind, they’ve put a great deal of effort into making sure non-alcoholic selections are tasty and exciting. 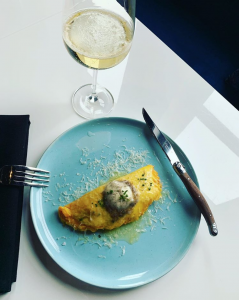 While we were sipping, we were also snacking. A banana theme ran throughout the menu the week we were there, so we tried the “banana miso crackerjack” – almonds, peanuts and popcorn stuck together with miso, banana and toffee. The only thing missing was the toy on the bottom of the box, but I suppose deliciousness is prize enough.

Ideas for dishes at Waxlight start with ingredients on hand in the kitchen. Waxlight’s menu will always feature a red meat and potato dish, like Denver cut steak and potato pave, but the remainder of the dishes will use abstract techniques and come in the form of something really surprising. For instance, that funky, nuanced umami flavor atop your soft, buttery omelet might be sea urchin made into a beurre monte with a chiffonade of bloomed wakame seaweed. Instead of sea salt to send a dish over the top, the chefs will opt for beef hearts that have been miso-cured, applewood-smoked, and dried to a grate-able texture, bringing salt and depth of flavor. 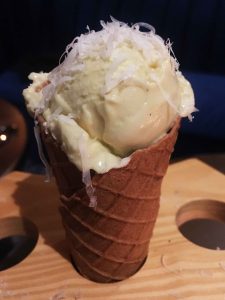 Waxlight’s confections were completely on point, starting with the Coconut Caneles de Bordeaux, a delectable French pastry with a crispy, caramelized crust and a soft custard interior.

The honey custard tarte was as beautiful as it was tasty – warm with a sweet and crunchy Concord grape streusel.

From their ever-changing menu with fresh, local ingredients to carefully selected wines in a gorgeous space, the Waxlight team hopes to offer their guests a unique dining experience in Buffalo that leaves you wanting more. I know I’ll be back to see what other surprises await.