In a city full of unique local eats like wings, beef on weck and sponge candy, there’s lots of reasons to love the regional foods of Buffalo. However, for those in the know, Buffalo-style pizza may be the most underrated dish in our flavorful city. But word of Buffalo’s delectably doughy, cheesy, “cup and char” pepperoni-topped pizzas is spreading…

Just this week, The Wall Street Journal, in an article covering regional pizzas across the nation, included Buffalo pies as one of the pizzas you should seek out.

Highlighting the pizzas at Buffalo’s legendary Bocce Club Pizza, the Wall Street Journal broke down what makes a Buffalo-style pizza just that. 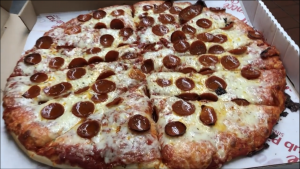 “Imagine a New York slice with triple the cheese and twice the sauce, with a shortening-browned undercarriage and toppings spread to the edge. Baseline on these 18-inch monsters: cup-and-char pepperoni, concave rounds blackened around the ridge,” the Wall Street Journal perfectly describes.

• For a well-rounded look at Buffalo’s best pizzas, check out our Pizza Crawl.