I grew up searching for authentic barbecue on family road trips to Florida through the Carolinas and Georgia. I have vivid memories of the sweet, tender, and smokey goodness we found at almost every stop. In high school my brother and I graduated to smoking our own meat and fixing our own sauces that always attracted half the neighborhood. After college I started working in Colorado. Every-time I drove across the country I would plan my route around looking for the best brisket and ribs in St. Louis and Kansas City.

So, what’s the barbecue like in Buffalo? Unexpectedly delicious based on the research I’ve been doing. In fact, there’s a newcomer to the local barbecue scene that’s getting rave reviews from publications like National Geographic Traveler. A recent article by Julian Manning called Southern Junction, an Indian Texas barbecue fusion stop in Buffalo, “some of the best barbecue in America.” That statement inspired me to dig a little deeper into my hometown’s barbecue joints. This list isn’t exhaustive by any means but it’s a good place to start.

First and foremost, the flavors here are unique. It is the only Malayali and Texas style fusion food in the country, if not the world. But what really stood out as soon as I opened the giant combo sampler chef-owner Ryan Fernandez prepared was the high quality of the ingredients that you could see and smell even before the first bite. I couldn’t help but try the Brisket Biryani first and the flavors literally jumped off my fork and onto my tongue. The texture and tenderness of the brisket was superb with a hint of Indian spices and not too much smoke. The ribs fell off the bone and exuded a flavor that was familiar yet unusual. The homemade barbecue sauce accented the meats perfectly with a slight tang and sweetness that was not overpowering in the least. The pulled pork had a sauce unlike anything I have ever tasted. We also tried the smokey tikka chicken — smoked chicken marinated in yoghurt and spices in a tikka sauce with a hint of heat served over coconut rice. Southern Junction is located in a refurbished warehouse at 27 Chandler Street that’s a little off the beaten path, yet during my time there a slew of regulars passed in and out. One customer told me to the smoked cauliflower. It was unbelievable. The smoked bacon wrapped stuffed jalapenos were the perfect addition to this wide-ranging platter. The whole meal was rounded out with homemade cardamon cornbread that soothed the jalapeno’s sweet heat.

The truth is La Verdad is delicious. This East Buffalo staple offers authentic smoked barbecue with a touch of gourmet flare. Chatting with chef-owner Vivian Robinson while picking up our meal she talked about her essential secret ingredients: love for food and people. That love is palpable in La Verdad’s offerings. The meats are cooked to perfection, tender, but with a good hint of smoke and excellent seasoning. The burnt ends — the charred tips of a brisket that produce some of the richest flavors of the barbecue world – offered unbelievable flavor. Paired with their homemade bourbon barbecue sauce you have a sure-fire win. The sides we tried included an apple-kale slaw, smoked gouda mac and cheese, Goya rice with a custom sauce, and perfectly moist cornbread. La Verdad is currently in a transition period, but still offering pop-up stops to their mailing list and always available for catering. In 2023, La Verdad plans to open a food truck and a new brick and mortar location. Stay tuned!

Fat Bob’s has been serving up consistently good barbecue at their Allentown location since 1999. They recently opened a second location at 42 North Brewing Co. in East Aurora. Their menu offers the standard barbecue fare like ribs, chicken, pork and brisket slow cooked in their custom Texas style smoker. Having eaten at the restaurant several times before, I opted to catch the food truck and try some slow smoked deliciousness on wheels. Anytime I try a barbecue spot I always go for a combination platter to sample as much of the menu as possible. At the Fat Bob’s Food Truck I got a pulled pork and brisket combo platter with their mac and cheese and collard greens. The pulled pork had great texture and flavor. The brisket was delicious with a great tasting rub. All of their sauces and sides are home-made and it definitely showed. The mac and cheese was superb and the collard greens knocked my socks off – maybe even stealing the show. A quick look at their dine-in menu also shows some excellent Creole-inspired varieties such as blackened shrimp, gumbo, and a Creole salad along with smokehouse nachos, four “Mac Bowls” (Memphis, Texas, Atlanta, and Buffalo), and a barbecue twist on a local favorite: brisket on weck. All of which warrant a return trip to this iconic Buffalo spot.

Ike & BG’s Restaurant has been a community staple since 1998. Founded by the late Isaac Gray and his wife Bettie “BG” Gray, Ike & BG’s cooks up delicious soul food and barbecue inspired by Ike Gray’s roots in Alabama. In 2017, Ike & BG’s was acquired by Steven Butler, Ike Gray’s godson and protégé who grew up working in the kitchen. This spot reminded me of the deep South but set on the East Side of Buffalo, complete with a barrel smoker letting off a sweet aroma on the sidewalk. I ordered a half rack of ribs with a side of mac and cheese and string beans. The ribs were tasty and you could definitely taste the wood smoke. The sides were excellent and full of soul food accents. What really stood out was an excellent house made barbecue sauce that I happily mopped up with the two slices of white bread served with the meal. Ike and BG’s also has a second location on Niagara Street in downtown Buffalo that serves up a range of finger licking soul food.

If you’re going to do Central Texas Style barbecue in New York State you may as well own it and Yankee BBQ’s name sure does. They also offer up authentic great tasting barbecue with a unique flavor. In good Texas style all of their meats are slow cooked with oak wood. We opted for a sandwich sampler, ordering the brisket, pulled pork, and prime rib sandwich. In each one you could definitely taste the wood smoke and spices that really brought out the flavor of the meat. The sauces are made in house and each one had a very interesting flavor. The first I tried had a light-colored Carolina mustard base with a hint of Texas pepper. The other was a very sweet loganberry, an almost syrupy sauce that was a nice change of pace and I alternated dipping bites in each. For sides we sampled the cheesy potatoes, baked beans, and coleslaw – all of which complemented the sandwiches nicely. What really stole the show for me was the smoked prime rib sandwich offering so much simple, craft flavor. On my next trip there I won’t miss the Big Texan sandwich: a quarter pound of brisket, a quarter-pound pulled pork, turkey, and a half hot link all held together with a pork rib toothpick. Try topping that! 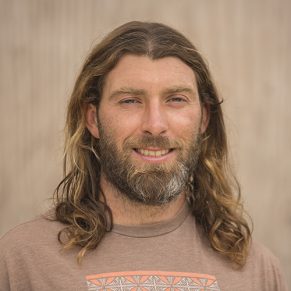 Kevin Cullen resides on the shores of Lake Erie with his wife Christian and two children Ocean & Lake. You can find them out on the water kiteboarding, paddling, and surfing, or out in the hills hiking, biking, and boarding.