Just before the puck drop at KeyBank Center, some of the Buffalo Sabres’ youngest fans stand next to the rink alongside one of the oldest, clamoring behind the plexiglass to see their favorite players warming up. 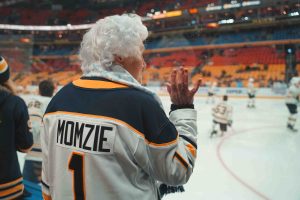 Standing next to them, quietly watching the players dart and scramble around the ice, is 95-year-old Anna Szczepanski of Cheektowaga, or, as she’s better known around the arena, “Momzie.” While the children soon returned to their seats around the arena for the game, “Momzie” was already at her front row seat, the same one she’s had for almost every Sabres home game since the arena opened in 1996.

In fact, Szczepanski has been in the same row and section to cheer on the team since Oct. 15, 1970, the night the Sabres first premiered in the Memorial Auditorium that preceded the KeyBank Center. She’s only missed a handful of games since, and always arrives early to see the team warm up.

A lot has happened in those 2,000 home games that she’s been a front row witness to – Stanley Cup finals, the reign of The French Connection, the “fog game” at The Aud. In those 50 years, Szczepanski has befriended referees who have supplied her with nearly 40 game pucks and players like center Sam Reinhart, who has given her two of his sticks.

“She’s had more boyfriends than Hugh Hefner had girlfriends,” quipped her son, Dave, who joins her at the games. “She’s like a mother to everybody.” 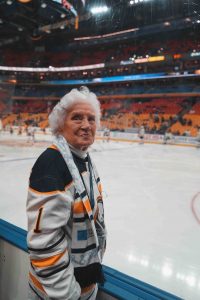 In 2019, the Sabres honored her as their fan of the year, and provided her with a customized number one jersey with her nickname, “Momzie,” which came from her son’s friends who consider her their matriarch. The honor was a defining moment for Szczepanski, a Buffalo native who has stuck with the team – and her city – through thick and thin.

‘You’ve got to support them to have a team. No matter how they play, you support them,” she said. “It’s a game. You win some, you lose some. A lot of people think you have to win every game. That’s impossible.”

Szezpanski has no plans to slow down; she’d like to live to 105 and keep attending games into her next century of life. 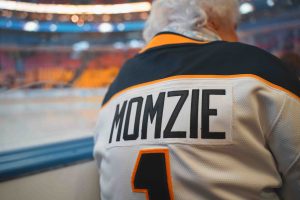 Many of Szczepanski’s contemporaries – and  even fans 10, 20 or  30 years her junior – prefer to watch the game from the comfort of their own home  as they get older. But for Szczepanski, nothing beats coming downtown for the excitement of the front row seats, the “whoosh” of the players speeding by or the startling thrill of the occasional body check into the plexiglass.