Linda Czuba Brigance’s interest in politics started as a little girl in the 1950s when she watched the political conventions being broadcast on TV with intense interest. She went on to become a professor of communication at SUNY Fredonia where she taught classes on political rhetoric, social movements and persuasion. “My research focused on how history is presented through museums and historic sites,” she said in a recent email exchange. After attending a few programs by the then virtual Buffalo Presidential Center – and retiring from her position at Fredonia – she joined the board of the Center. “So, in a few short, but exciting years, I have gone from studying museums to helping to open one,” she added.

The Buffalo Presidential Center has found a home at the Central Library in downtown Buffalo where its sizable collection of political artifacts can be stored and public programs presented. It is now open to the public during regular operating hours of the library.

For more information about the Center, visit buffalopresidentialcenter.org 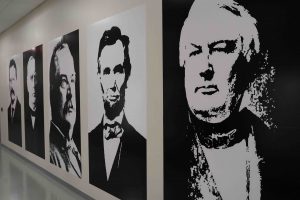 Visit Buffalo Niagara: For those who aren’t familiar with Buffalo’s history, why build a Presidential Center here?

Linda Czuba Brigance: That’s such a great question because it actually points right to the answer — so many people don’t know about Buffalo’s unique connections to the U.S. Presidency. Most people can tell you one or two things — like the assassination of McKinley or the inauguration of Teddy Roosevelt — but when you consider the whole story, it’s another claim to fame and one that deserves a special focus.

In his 2016 travelogue Dead Presidents: An American Adventure into the Strange Deaths and Surprising Afterlives of Our Nation’s Leaders, author Brady Carlson says that no city except Washington D.C has more connections to the Office of the President of the United States than Buffalo, New York!

Our reason for existing is to tell the stories about this rich, mostly unknown local and regional history. With 1700-square-feet of exhibit space as well as storage and work/meeting rooms, the Buffalo Presidential Center’s programming will be more visible and accessible to school groups, history enthusiasts and presidential history scholars than it has been in our first decade. 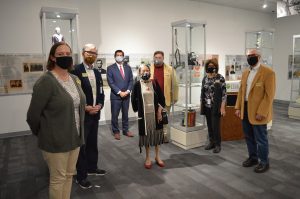 VBN: Buffalo has such a rich Presidential history; how do you choose what to highlight?

LCB: We want our visitors to walk through the exhibit saying “I didn’t know that!” so the visitor experience is the driving force.  We have a collections committee that is composed of several of our Trustees who are also first rate collectors.  They know our collection inside and out and look for themes that will tell compelling stories about Buffalo’s presidential connections.  And, we have members and advisors who are experts in various time periods or personalities in history, Buffalo history, political campaigning, the law, media, and political rhetoric who suggest topics for either speakers’ series or exhibits. In addition to historical subjects, we serve as a place for conversations about timely topics. For example, we have hosted panels like “The Media and the Presidency” with the goal of educating our audiences about contemporary issues.

VBN: It seems very brave to be opening a new cultural institution in the middle of a pandemic; how has this public health crisis impacted your plans?

LCB: Brave? That’s a good word for it. We started this venture way before anyone ever heard of COVID. We never would have dreamed that in addition to working with a museum designer and curating opening exhibits, we would be writing a COVID safety plan that meets state and CDC standards and purchasing hand sanitizer stands to keep our volunteers and visitors safe. While we assume some things will be very different than we had originally planned, we are determined to carry on and be both optimistic and realistic.  We know people are looking for new things to see and stimulating information, and we can provide both. We got an email the other day from a mother who said her seven-year-old son is very interested in presidents and history and wanted to know when we would be open. That email alone made all the extra preparations more than worth it! 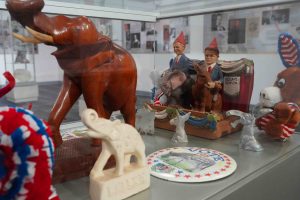 Items from the Donkeys and Elephants collection.

VBN: Tell us about the Donkeys & Elephants exhibit.

LCB: The first revolving exhibit in the Buffalo Presidential Center’s new museum, Donkeys and Elephants, explores how two iconic symbols have been used to promote, or denigrate, the Democratic and Republican Party candidates for more than 190 years. The exhibit traces the evolution of these political animals from the newsprint illustrations and political cartoons of the 19th century to the clever array of weird and funky products used today.  The display includes original iron doorstops from 1908, ceramic ashtrays, plastic toys, plush dolls and more…all in one place.

VBN: Buffalo also has the TR Inaugural Site and the Millard Fillmore House in East Aurora; how do you plan to coordinate your activities to ensure visitors have the best experience possible?

LCB: For the past ten years before having our own home space, we have relied on the collaboration and generosity of a variety of other local and regional organizations for a place to gather our audiences for speaker’s series and exhibitions.  Our new space will let us expand the kinds of programming we do and the audiences we can reach; but we are so lucky to be part of such a rich cultural community — and will continue to collaborate with all of our partners. 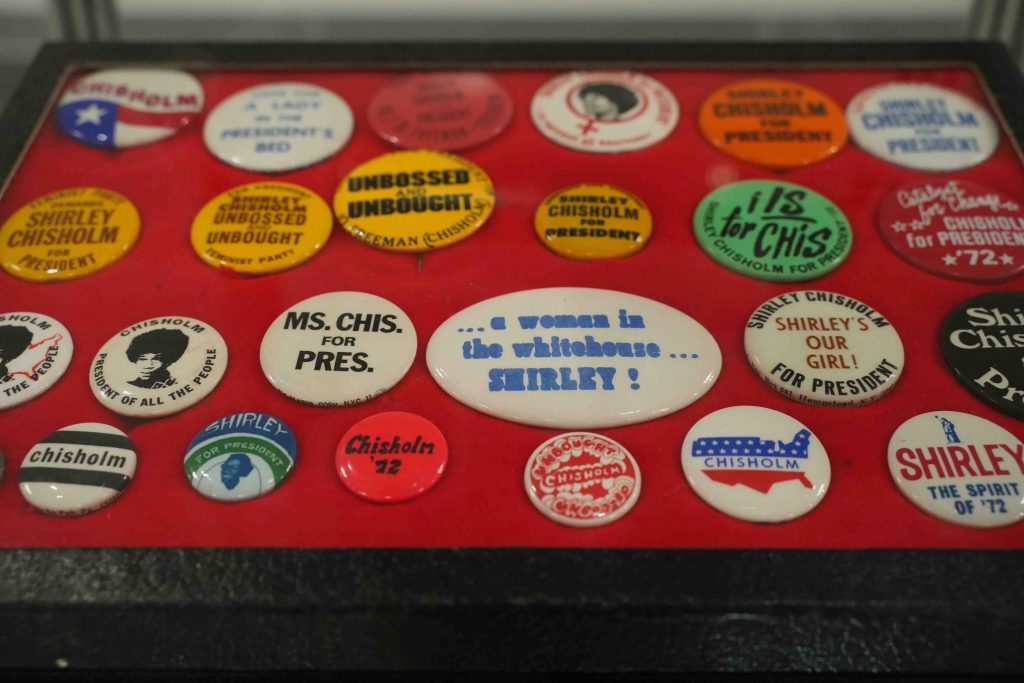 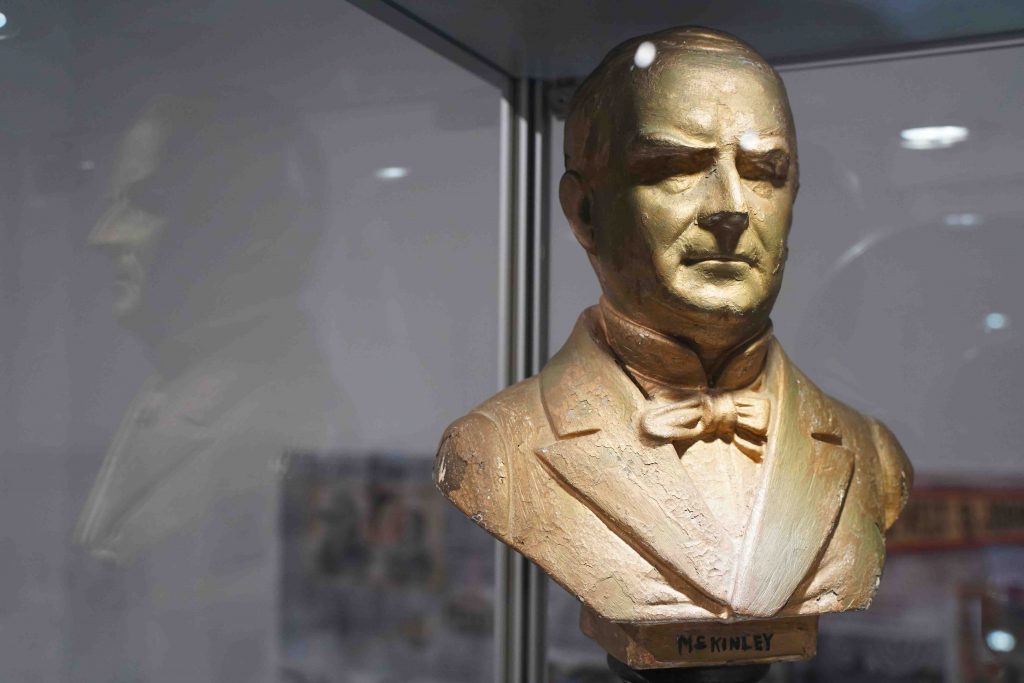 VBN: What programming does the Center have planned for the year to come?

LCB: We have a several programs in the planning stages including one about former Supreme Court Justice and Nuremberg Chief Prosecutor Robert H. Jackson and another about a certain popular former First Lady’s connection to a very beloved children’s book. We also plan on creating material that would be of interest to school age children and their teachers. We are also working on expanding our online and social media presence so that we can reach even more audiences. Future rotating exhibits will include a look at some of Western New York’s non-political figures such as James Benjamin Parker, the African American man who tackled President McKinley’s assassin, preventing him from firing addition shots and Angel Canedo, White House butler to Presidents Ronald Reagan, George H.W. Bush, George W. Bush and Bill Clinton.