Buffalo loves the Bills. This is not unusual. Many NFL cities love their NFL teams.

Ah, but Buffalo loves the Bills in a way that other cities do not. And cannot.

That’s because of the bison on the helmets. Other professional sports teams have logos that feature their mascots — Lions and Tigers and Bears, oh my! — or sometimes simply the initials of their cities. But only Buffalo has a buffalo. It tells the world that the Bills are not merely our team. They are us.

“Bills Mafia” is the term that has come to embody this notion of oneness. It means that the Bills and their fans are family.

The hashtag began as a joke and morphed into a movement. The short version goes like this: Bills receiver Stevie Johnson dropped a game-winning touchdown pass in 2010. On Twitter, he blamed God. (“I praise you 24/7! And this is how you do me!”) This made national news. ESPN’s Adam Schefter tweeted about it a day later, which is an eternity in Twitter time. Some Bills fans mocked him for being late to the party: “Man Invents Fire #SchefterBreakingNews.”

The hashtag #BillsMafia was born of this back and forth. Bills fan extraordinaire Del Reid coined the term after being blocked by Schefter on Twitter. He meant it to convey twin thoughts. First: Hey, national media, we are going to stand up for our team. Second: Hey, Buffalo Bills, we’ve got your backs.

The term was an inside joke that Reid figured would soon be forgotten, like most things on Twitter. But then the Bills signed linebacker Nick Barnett — and he embraced #BillsMafia, online and on game day, giving the term a massive boost. Soon other Bills did, too. From there it just snowballed, as things in Buffalo tend to do.

And that’s the beauty of Bills Mafia. It tells the tale in two words.

“The Bills are that extra family member in every household in Western New York,” Reid says. “Families have disagreements. We don’t always see eye to eye. But families love each other. And we all love the Bills.”

Buffalo styles itself as the City of Good Neighbors. Reid remembers how local fire halls and VFW posts regularly raised money for folks in need. So, he figured it was only natural that Bills Mafia should do the same. That hashtag has raised hundreds of thousands for charities near and far, usually in small increments — such as $17 for Josh Allen’s number — that add up to big amounts.

Bills Mafia raised more than $1 million for the Oishei Children’s Hospital, in honor of Patricia Allen, Josh Allen’s late grandmother. They even donated $500,000 last winter for Blessings in a Backpack, Lamar Jackson’s favorite charity, after the quarterback was injured in the Bills’ playoff win against his Baltimore Ravens. They even rallied to donate to more than $65,000 for Western New York Visually Impaired Advancement following a questionable play call by NFL officials in December of 2021.

“Love doesn’t know city limits,” Reid says. “This is who we are.”

Bills Mafia is a movement born of happy accident, but what it represents was always here. It’s just that now we have a name for it. 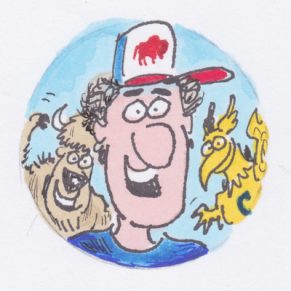