Nestled between downtown and the Hispanic Heritage District, Strong Hearts Buffalo offers vegan options with familiar flavors for omnivores and herbivores alike. The vegan café with a cult following started in Syracuse in 2008, and finally opened a long-awaited location outside Syracuse.

Prior to Strong Hearts opening here in July 2022, Buffalo only had two 100 percent vegan restaurants. Plenty of WNY restaurants offer vegan and vegetarian options, but only Guud and Evul (Tonawanda) and Sunshine Vegan Eats (on Buffalo’s east side) were committed to fully plant-based dining.

The fast-casual café – no need for reservations! – is bright and inviting, perfect for quick work lunches or family dinners alike. As you walk in, you’ll see a mural from Doug Aldrich, an NYC-based artist who researched Buffalo’s famous signs and attractions to spell out S-T-R-O-N-G-H-E-A-R-T-S. At the counter, you’ll find a dessert case loaded with goodies. The staff knows guests aren’t always familiar with vegan food, and are always happy to make recommendations or share ingredient lists.

Nearly every dessert is made in-house, with rotating flavors each day. The Cookie Monster cupcake is a show-stopper with a chocolate chip cupcake base, electric blue frosting, and two cookie halves. The bakery also experiments with cakes, cheesecakes, cookies and more – it’s always a pleasant surprise to find out what’s in the dessert case each visit. To ensure everyone can enjoy vegan treats, the restaurant also sources gluten-free, vegan desserts from Eat Your Feelings Bakery (West Seneca).

Capolongo and general manager Mackenzie April are proud of Strong Hearts Buffalo’s mission for quality vegan food in support of animal liberation, while also remaining accessible to everyone. “The majority of our customers are not vegans. They’re omnivores who might live in the area, or might work in the area, and are just looking for a good meal,” he noted.

For vegans traveling to Buffalo, Capolongo and April – both vegan themselves – noted how easy it is to find plant-based food options, despite Buffalo’s reputation for meat-heavy dishes. They shouted out vegan options at Allentown Pizza, Mister Sizzles and Saigon Bangkok, and both spoke highly of both Sunshine Vegan Eats and Guud and Evul. “In the all-vegan restaurant scene, there’s no pretentiousness,” April said, also highlighting the creativity in vegan dishes around town. “You’re not just getting the same thing over and over again… people are very creative and proud of vegan food.”

And, if you’re curious about vegan cuisine but don’t know what to expect, they hammered home how approachable vegan food in Buffalo – and at Strong Hearts – can be. Everything you’ll find on the menu is what you’ll find at most restaurants, just free of animal products. You won’t be judged for not being vegan, but rather welcomed at Strong Hearts for a solid meal.

“Come in and have an open mind,” Capolongo said. “And expect good food, not just vegan food.” 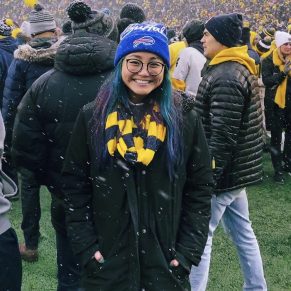 Taylor writes about hockey at Die By the Blade and college football at Meet at Midfield. She's also a regular Buffalo Eats contributor.