Nestled in the heart of Buffalo’s West Side is an oasis for gamers of all ages, from every background, with a passion for play. Gather & Game is the sophomore spinoff by Buffalo re-pats, Joe and Jeanenne Petri who opened their used bookstore, Westside Stories a decade ago.

The couple spent time living in Florida and New York City before deciding to trade in strollers on the subway for a home of their own, near family. When they returned in 2010, they were able to buy a home in a West Side neighborhood for what most people might spend on a car. “What you receive here in Buffalo is hard to beat, even with prices rising,” Joe says.

It was important to them to live in a walkable community with nearby amenities and an inclusive, family-friendly atmosphere. At the time, the former Sweetness 7 Café had just opened along with several new businesses, signaling a vibrant revitalization. The Petri family moved a block away from the café and soon became regulars, with their young kids hanging out after school and as Joe says, “eating far too much capicola.” The community was exactly as they hoped it would be.

Living in the same neighborhood as their successful Grant Street bookstore, Westside Stories, was a dream realized for Joe and Jeanenne. Enthusiastic gamers themselves, the eventual foray into gaming felt like a natural progression. They opened Gather & Game in a space across from the existing bookstore and the venture was well-received. Then came the pandemic.

Despite shifting gears from in-store shopping to online, curbside pickup and free local deliveries, the writing was on the wall for Westside Stories. “In some ways, the pandemic helped us look at the numbers and make a drastic decision,” says Joe. They received immediate support from their longtime landlord and made the decision to move the gaming store into the space that housed the bookstore.

Gather & Game 2.0 is open and welcoming players back for in-store gaming in the with expanded inventory and a new café counter. Online ordering, in-store pickup and local deliveries will continue to be available. The current store hours are Tuesdays, Wednesdays, Thursdays and Saturdays from noon until 9:00 p.m., 1:00pm until 9:00 p.m. on Fridays, and noon until 4:00 p.m. on Sundays. 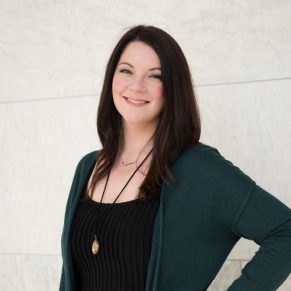 Lindsay is owner of Lindsay Hyatt Copywriting and a proud Buffalonian. When she’s not writing, you’ll find her spending time with her husband and two daughters, singing in her band, and trusting the process with the Buffalo Bills.