Edreys Wajed has been described as a painter, a poet, jewelry designer and entrepreneur. He’s also worked as a musician and educator. While it may be hard to pin him down and adequately describe his many passions and pursuits, one thing is certain – he is creative, prolific and has a profound need to express himself. An exhibit of his recent paintings, “Wish You Were Here,” can be seen at Buffalo Arts Studio through Sept. 5th and a new mural he painted of the late jazz saxophonist Spider Martin was recently unveiled across the street from the Niagara Falls Train Station. His work can also be seen at Buffalo’s Freedom Wall at Michigan Avenue and East Ferry Street and in the permanent collection of the Burchfield Penney Art Center. Visit Buffalo Niagara recently exchanged emails with Wajed to learn more about his work.

This interview has been edited for length. 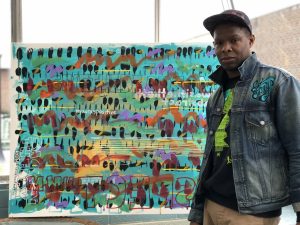 Visit Buffalo Niagara: Buffalo is suddenly filled with murals and public art and there’s a high degree of respect and recognition for the art work around town; how does it feel to be a part of what feels like a movement to make Buffalo more colorful and visually vibrant?

Edreys Wajed: It’s a pleasure to have made contributions to this surge and swing in beautification throughout Buffalo. The feeling that I have is similar to winning a really big game, like a championship or the likes, knowing that my efforts mattered and helped make a small contribution to the collective and larger picture. There is a healthy growing list of talented artists taking to the task, so it’s great seeing just how many artists are creating wonderful works of large scale art on center stage and how many companies and institutions are investing into the artists and entrusting them with meaningful, refreshing imagery.

VBN: Is this a special time for the visual arts in Buffalo — a time people will look back on and say, wow, some cool things were going on back then?

EW: I think this time is special for visual arts, in general. Particularly to Buffalo, I appreciate the growth and boom in the arts scene, regarding artists being afforded opportunities, visibility and acknowledgement. Since periods and eras prior, art and artists have always been the healing agent; the stable distraction for our psychological well-being during times of tumult and turmoil. When the world gets dark, art ignites and catalyzes peace of mind, awareness and even activism. Buffalo isn’t removed or exempt from some of the darknesses which some may presume unique elsewhere solely. So, to see art catching fire in Buffalo, it’s a welcoming blaze. 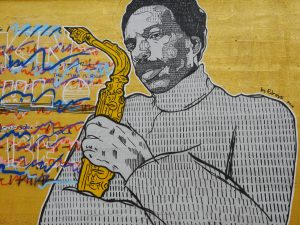 VBN: It feels like you’re having a moment personally as well. You’ve got a solo exhibit at Buffalo Arts Studio, a new high profile mural in Niagara Falls and you’ve been nominated as Artist of the Year by the Arts Services Initiative; does it feel like validation for your persistence and perseverance as an artist and maker over the course of many years?

EW: This is a tough question. I personally terminated the need for validation long ago, because that feels like playing a lottery ticket and sitting around, waiting anxiously while nail biting. I opt to stay in the flow and on the move creatively, regardless of who’s watching or not watching. What I consider validation personally is the ability to leverage the visibility and opportunities in order to sustainably feed my family. The recognition only has value to me when my wife, my parents, in-laws, family and friends beam with pride, otherwise, reading about myself is vain.

VBN: Describe the work that visitors will see at your exhibit at the Buffalo Arts Studio and your process in creating it.

EW: The “Wish You Were Here” exhibit is a 69 pieces full, solo show, all serving as snapshots of my adoration for and connection to music. Each painting represents one single song. A song that I have some sort of feeling for or towards, I’ll put on repeat for hours if need be, deconstructing the song, instrument by instrument, assigning movement and color to each. I then begin painting each instrument’s movement onto the canvas individually, layer after layer, until every component of the song is represented and accounted for. Lastly, I incorporate text pulled directly from the lyrics of the song, intending for them to be affirmations in short, or mantra-like, where the viewer can engage with the entire piece, recalling their own personal experience or connection with it and hear the song with their eyes and mind, not their ears. 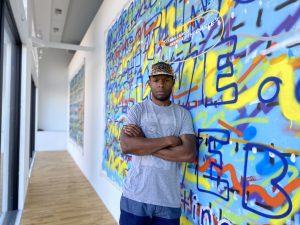 VBN: You’ve been described as a painter, a poet, jewelry designer and entrepreneur; is there one area you would prefer to focus on if you could?

EW: There was a time where I would be very hard on myself for not picking one interest solely over the other, until I realized that to be able to create using various practices exceptionally well was a gift. I embrace them all. I obviously can’t do each at the same time, however at the root of them all is the need to create and express myself, and each facet or skill informs the other. It goes in waves, and I’ve come to respect the flow. There have been days where I’ve created jewelry, a painting and written a song all in the same day.

VBN: Are each of your interests equally satisfying or rewarding in different ways?

EW: Great question. At the heart of them all is creative solution-finding, where I have an end goal in mind and the way to the finish line is never a straight line nor without obstacle. The tools are different for each respective interest, yet I must say that they are each as rewarding and satisfying.

VBN: Your work is now in the permanent collection of the Burchfield Penney — how does it feel to know your work is now part of a legacy of Western New York artists that includes some pretty impressive and well known figures in the art world?

EW: This sort of validation is a well welcomed passport stamp of sorts, which I am very proud of. Not many people know about it, as I haven’t made an official announcement of it myself, to-date, as I just kept my head down and continued working. To be in a collection that boasts names with world acclaim is an incredible gesture and incentive to continue diligence in my practices. I’m grateful to the people that I’ve met at the BPAC and greatly appreciative of advocates like Dennis Kois, Scott Propeack and Renata Toney in granting the opportunity to be a part of such a rich collection. I graduated from Buffalo State College, so returning in a sense to the campus in that fashion is “validation.”

VBN: You were one of four artists who painted the murals at the Freedom Wall — one of the most high-profile and highly regarded public art endeavors ever undertaken in Buffalo; can you describe how it feels to have been a part of this project and the larger meaning of honoring these local and national heroes of the civil and human rights movements? 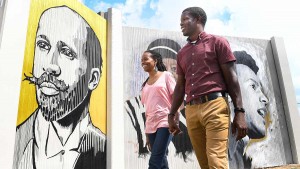 EW: The Freedom Wall will always be a historic and iconic moment in Buffalo’s history, not just as a public arts momento. Most notably, a wounded, fed up and often suppressed community made their voices heard before a long-standing, powerful institution, leading to fiery and emotional town hall meetings, where all parties eventually amicably saw the large project through successfully. When the opportunity came to me, I almost refused and pardoned myself from the project. I was working full-time and in order to participate on the mural, it would require me to be free during office hours. My wife and I felt that it was an opportunity and moment in time not to be passed up. In order for me to accept the offer, I had to take a leave of absence from my place of employment, meaning no salary and no benefits to care for my family properly. These mural projects are obviously one-offs, and we knew that the money earned would not cover our living expenses for the duration, so we took a bit of a hit during that time, yet the sacrifice to be a part of that history was a price worth paying. It was an amazing privilege to be called to the main stage and work with a talented ensemble of artists collectively to make one long 300-foot art performance that would serve as a time capsule where we all did something good, right and just or at least to the best of our ability. Public recognition of the icons on the wall was long overdue and truly the wall wasn’t long enough to acknowledge the many who lead lives of selflessness, fighting for human and civil rights. It was truly an honor to pay homage and respect to the 28 dignitaries who paved a way for the playing field to be level enough, not an even field, yet level enough for myself, the other artists and the community to push the needle further towards equality and equity.

VBN: You have so many pursuits; where do you see yourself in five years?

EW: Five years ago, I didn’t see myself being here, really, so, five years from now will be beyond anything that I can craftily respond with. Living authentically and providing for my family in an abundant manner while making a difference in the lives of others through art, music, creativity and philanthropy.