The village of East Aurora, located 20 minutes southeast of Buffalo, can stake claim to the residence of an American president – Millard Fillmore – and the birthplace of the American Arts & Crafts Movement – the Roycroft Campus. Today, a stroll along Main Street in East Aurora at first feels like a step back in time. A movie theater with a vintage marquee sits across the street from a huge five-and-dime store with a red striped awning. An elegant post clock adds to the air of classic Americana. But a closer look behind the quaint storefronts and general sense of small town coziness reveals the amenities of a hip urban neighborhood featuring excellent coffee shops and restaurants, high end stores and boutiques, walkability and craft beer. The best way to get to know this multifaceted village is on foot, of course. Off you go.

The walk is 2.9 miles in length and should take approximately one hour and thirty minutes to complete. 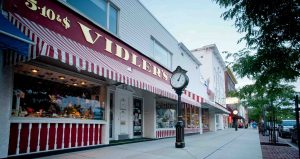 As the 20th century dawned, so did the age of the machine. While businessmen licked their lips at the prospect of such efficiency, another much smaller group fought against the tide to ensure that the unique beauty and quality of handmade items would live on. They called their cause the Arts & Crafts Movement, and no American became more closely associated with its ideals than Elbert Hubbard, who founded the Roycroft Movement in East Aurora.

Beginning as a successful printing shop that practiced the old ways of handmade bookmaking, Hubbard’s venture grew into an entire campus of craftsmen, including a blacksmith, copper and furniture shops, and its own farm, bank and inn. At its height, the campus was one of the main centers of creative expression in the United States – its guestbook included the likes of Susan B. Anthony, Thomas Edison, Theodore Roosevelt, Booker T. Washington, Rudyard Kipling and Harry Houdini.

Perhaps equally impressive to Hubbard’s vision is the fact that much of it is not only still standing – it’s still functional. Visitors spend their days shopping for handcrafted treasures and taking classes in a wide variety of aesthetic mediums, including glass blowing, screen printing, bookbinding and stained glass. And the Roycroft Inn (40 South Grove Street) is a beautifully renovated inn and restaurant that’s imbued with an equal blend of elegance and rusticity. 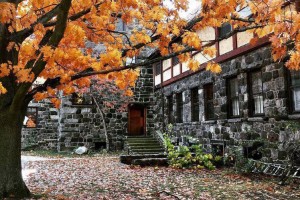 Begin your walk at the Roycroft Inn. Looking across the street, you’ll find the rest of the Roycroft Campus, highlighted by the Copper Shop, the chapel and the newly rebuilt power house.

After exploring the Roycroft Campus, walk to the corner of Main Street and turn right.

On your left, you’ll see Meibohm Fine Arts, which has been in operation for more than 110 years and offers works by an impressive group of American and international artists. On your right, you’ll pass the East Aurora Cooperative Market.

Pass under the railway bridge and turn left on Riley Street. On your left, you’ll come to Riley Street Station, a 1917 train station converted into a bar and restaurant. Next door is the Classic Rink, which features the portable ice rink that was originally used on Jan. 1, 2008 for the first NHL Winter Classic at Bills Stadium.

Double back to Main Street and turn left. The next two blocks are filled with restaurants and cafes, like Griffon Gastropub and Taste Bistro & Coffee Bar (which are both housed in a converted 1918 grain facility), Rick’s on Main, 42 North Brewing Company and The Globe Hotel. You’ll also find independently owned shops, ranging from clothing boutiques like The Dress Shop to Limelite Music, which features an impressive line-up of Gibson and Fender guitars. Head down Elm Street to visit MUSEjar Art Supply Shop and RedFISH Art Studios. Get a smoothie at Kornerstone Café or grab a meal anytime at Elm Street Bakery. 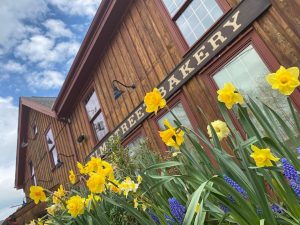 Along the way, you’ll come to two East Aurora landmarks. On your right, you’ll see the Aurora Theatre and Popcorn Shop, an old-fashioned movie house that opened in 1925. On your left, you’ll find Vidler’s 5 & 10, a deceptively huge store that has been offering everything from cookware to penny candies for more than 80 years.

As you cross over Olean Street, you’ll be leaving East Aurora’s downtown district and entering a stretch of lovely homes. Turn right on Elmwood Avenue, walk up a slight incline, and then turn right on Oakwood Avenue.

At the corner of Olean Street, you’ll pass the Hampton Inn. As you approach the corner of Elm Street, you’ll find the 1825 General Riley House, Wallenwein’s restaurant and the Little Red Caboose ice cream stand. Continue on Oakwood. At number 363, you’ll reach the Elbert Hubbard Roycroft Museum. Located in a home built in 1910 by Roycroft Craftsmen, it is filled with beautifully-illuminated books and handmade furniture and copper goods. 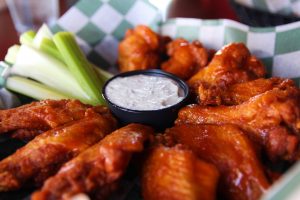 Turn right on Center Street and walk a block to Main Street. On your right, you’ll see the Baker Memorial United Methodist Church. Completed in 1928, this church features 17 Tiffany windows.

At this point, if you turn left, you’ll find a pair of popular casual restaurants. Pasquale’s offers Italian classics and Bar-Bill Tavern, appearing on the Buffalo Wing Trail, serves some of Western New York’s best wings, featuring a sauce that marries heat and sweetness. Or grab a seat and try an impressive selection of craft beers at Aurora Brew Works. 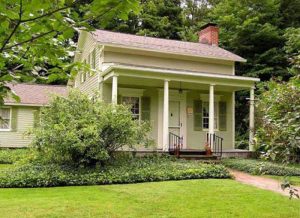 To continue on the tour, go straight, crossing over Main Street onto Shearer Avenue. On your right, you’ll see the Millard Fillmore House, a building that was once home to America’s 13th president.

Double back to Main Street and turn left. You’ll pass the East Aurora Middle School on your left, which features statues of Elbert Hubbard (1930, Jerome Connor) and Michelangelo (1908, Paul Bartlett) on its front lawn. Turn right on South Grove Street to return to your starting point at the Roycroft Inn.