It’s several hours before kickoff just down the road from Highmark Stadium, and Ken “Pinto Ron” Johnson is tailgating much as he has for the previous 400+ Buffalo Bills games.

Johnson, who has not missed a Bills game since 1994, arrives before 7 a.m. each game day in “Hammer’s Lot” on Abbott Road to prep for one of the most renowned tailgates in the National Football League. The tailgate’s centerpiece is his 1980 red Ford Pinto that earned Ken his nickname (A news story once mistakenly called him “Ron” and the name stuck). 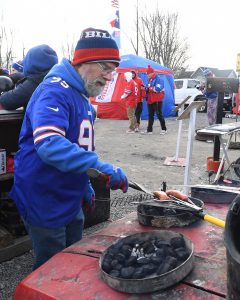 By 9 a.m., as fans filter into the lot, Pinto Ron and his family and friends have turned the hood of the Pinto into a massive grill. There’s bacon sizzling on a saw, a pancake cooking on a shovel, cocktail wieners boiling inside a hubcap, Buffalo wings frying inside an old army helmet and sausage links grilling on a rake. And then there’s Johnson’s friend, “Pizza Pete,” slinging pies from the inside of a filing cabinet.

At 11:30 a.m., spectators have gathered to witness “The Ketchup Opening Ceremony.” Johnson’s friends used to squirt ketchup on his hamburger bun from a distance; when one misfire landed ketchup on his arm and hilarity ensued, they decided to make him the target instead, standing on top of a van and covering him with condiments before every game. 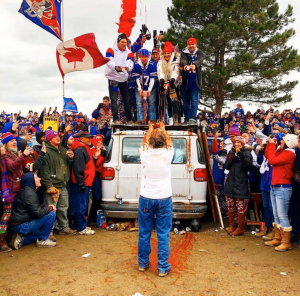 Johnson quickly cleans up and never lets his tailgate get in the way of watching the Bills; tailgating is “just a bonus.” He spends tailgate mornings with a beer in hand mingling with friends and posing for selfies with strangers. More than 50 of his friends park in the lot with him on any given Sunday, and hundreds more visitors stop by just to say hello – motivation for Johnson, a software developer from Rochester, to keep the tailgate going.

“If you do something dumb enough and stupid enough for long enough, eventually you’ll become known for it,” Johnson said. “The key is persistence.”