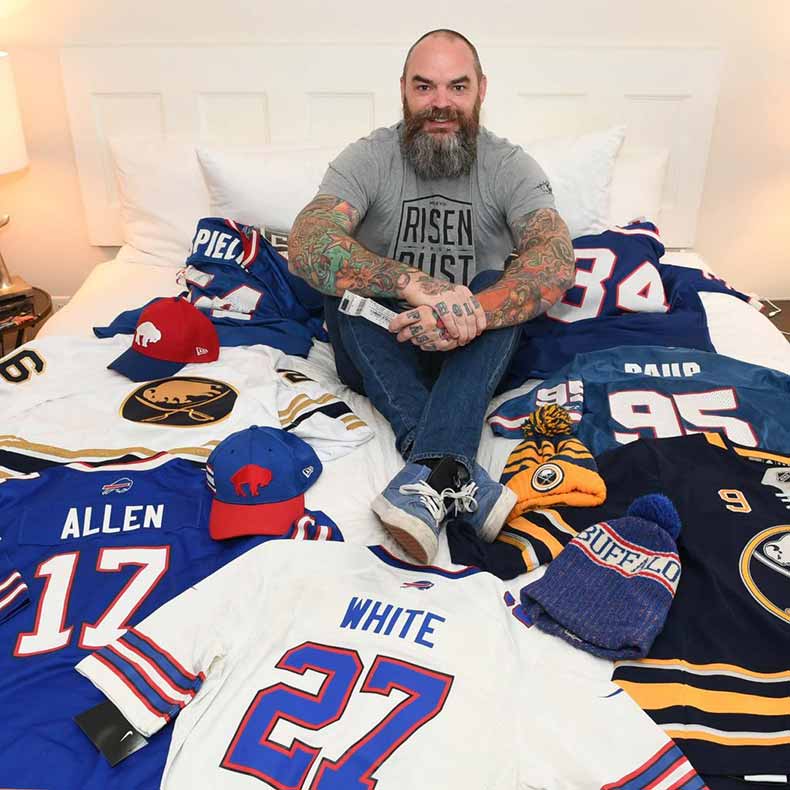 Murray Daniel conjures up so much exuberance pertaining to Buffalo (the people, sports, architecture and food) that he inspires a new term: BuffaLove Maximus. He spoke to In the BUF on the cozy front porch of InnBuffalo Off Elmwood as a few other guests sat nearby plotting their day.

This is Murray’s second trip to Buffalo. And it’s not just any trip. He’s traveled all the way from his home in Cairns, Queensland, Australia, where he works with troubled youth for the Education Department. He’s here to experience all that he can between – and during – two Bills games. He was here last November with his wife, Natalie — a dream come true after more than thirty years of rooting for the Bills and Sabres.

“In ’88 I saw a program about Thurman Thomas, when he was being drafted, when he slid into the second round and a camera crew was in his home. After that Thurman tore them up on the field and then he was my guy. I got into the Bills because of him.

“Last November my wife bought us tickets to an event at Buffalo History Museum where Thurman was going to be. When I met him, I was fan-boying so bad, my wife had to step in and tell me to keep calm. He knew that I follow him on Twitter, and a photo of me and Thurman is my Twitter profile picture. We just chatted about everything, time just flew, it was a surreal moment.” It should be noted that Murray’s email address includes the number 34 – the number Thurman wore throughout his Hall of Fame career.

“I love how Thurman talks about how he and Patti fell in love with Buffalo, they are really normal people. Everyone here in Buffalo is really normal. I bumped into Jack Eichel around the corner two days ago at Revolver Records and got a photo with him. Nat and I have talked about spending a whole Bills season here — it’d be lovely. We also talked about retiring here. Last November we walked around Larkinville and talked about how we could live in one of the former industrial buildings.”

He goes on to list all the places that he and his wife have visited in Buffalo, and where he’s been this solo trip: “We’ve been to Darwin Martin House, we did an Explore Buffalo walking tour on a Sunday to see the downtown architecture. It was brilliant. We went back to the Guaranty Building when it was open that Monday to look at the details in the lobby. We did an Explore Buffalo Food Tour in Hamburg and loved that. We’ve also done a wine tasting at Winkler & Samuels.

“This trip is about hanging out, being more of a local. I haven’t done Dyngus Day or Saint Patrick’s Day, but I follow the madness on Twitter. I want to go to Shea’s and Graycliff, but want to save those for when Nat is here. We did love Toutant, and tonight I’m eating at The Black Sheep.”

Murray has already sampled enough wings to have a list of favorites. His top three are Kelly’s Korner, followed by Gabriel’s Gate and Dwyer’s. He and his wife make wings at home and he’s happy that Frank’s Hot Sauce has finally been imported into Australia. He’s also been to Charlie the Butcher and raves about beef on weck: “Simple, but delicious.”

A friend in Australia calls Murray “The Buffalo Marketing Board,” and he’s proud of that. His best friend in Australia is a guy he bumped into on the street at home: the two were both wearing Bills jerseys and became instant friends. “I couldn’t believe what I was seeing, we passed each other and turned around and then we walked up to each other and talked. We’ve been best friends ever since; that was 25 years ago. I’m godfather to his kids, and I was the best man at his wedding.”

Murray may have fallen hard for Thurman Thomas, Jim Kelly, the Bills and Sabres, but his passion for our local sports teams has grown into an all-encompassing love for all things Buffalo: “The hook that got us here is football,” he says, “but the thing that will keep us coming back is the architecture, the people, and the food.”

We agree, Murray, we agree.