On November 16, 1896 inventor Nikola Tesla flipped the switch that made Buffalo the first electrified city in the world. This first long-distance transmission of alternating current (AC) electricity helped power Buffalo’s street cars and light up its streets and it wasn’t long before the entire world was electrified using Tesla’s innovations. This momentous occasion and the man who made it possible have been honored with a new statue in downtown Buffalo at the corner of Main Street and North Division. The location of the statue has been officially declared Nikola Tesla Park by the City of Buffalo.

The installation of the statue in late September was the culmination of years of work by local Tesla devotee, documentary filmmaker Martin McGee, who was determined that the prolific inventor, brilliant physicist, humanitarian and engineer be appropriately honored near the site where his invention changed history. 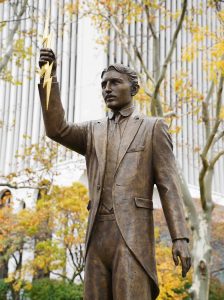 Martin McGee: Nikola Tesla is one of the greatest geniuses in all of human history. He has been called the Father of the 20th Century but his futuristic vision extends fully into the 21st century. His ideas and inventions have had lasting impact on billions of people around the world. It’s only relatively recently that Americans have come to know about and appreciate Tesla. The car company named after him was one factor leading to wider recognition in the United States although he’s been lauded in most other countries for many years, especially in Serbia. He was the first to research wireless technology and predicted the smartphone almost a century ago in the 1920s. Films and documentaries have come out at a steady pace over the last ten years. Tesla has been played by David Bowie and most recently by Ethan Hawke in the 2020 film simply titled, Tesla. Unfortunately, for the most part, Tesla’s life and achievements have pathetically been ignored in American schools. Hopefully, this is about to change as a new generation of fans, many on the younger side have catapulted him from a cult figure to a global phenomenon.

VBN: We’re celebrating the anniversary of Tesla bringing electrical power to Buffalo; what actually happened that day in 1896?

MM: The Westinghouse company had installed massive alternating current (AC) generators at Niagara Falls that were designed and built using Nikola Tesla’s patents. After a five-year nightmare of doubt and financial crises, the project approached completion. When the switch was thrown, the first power reached Buffalo at midnight, November 16, 1896. The first one thousand horsepower of electricity surging to Buffalo was claimed by the street railway company, but already the local power company had orders from residents for five thousand more. Within a few years, the number of generators at Niagara Falls reached the planned ten, and power lines were electrifying New York City. Broadway was ablaze with lights, the elevated street railways and subway system rumbled; and even the Edison systems converted to alternating current. 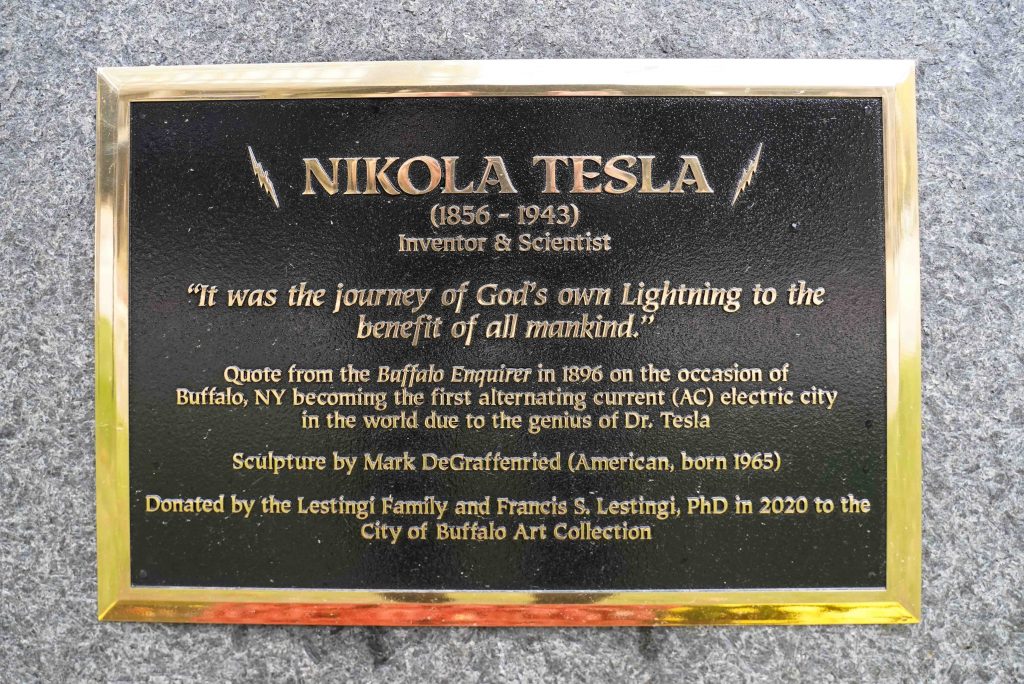 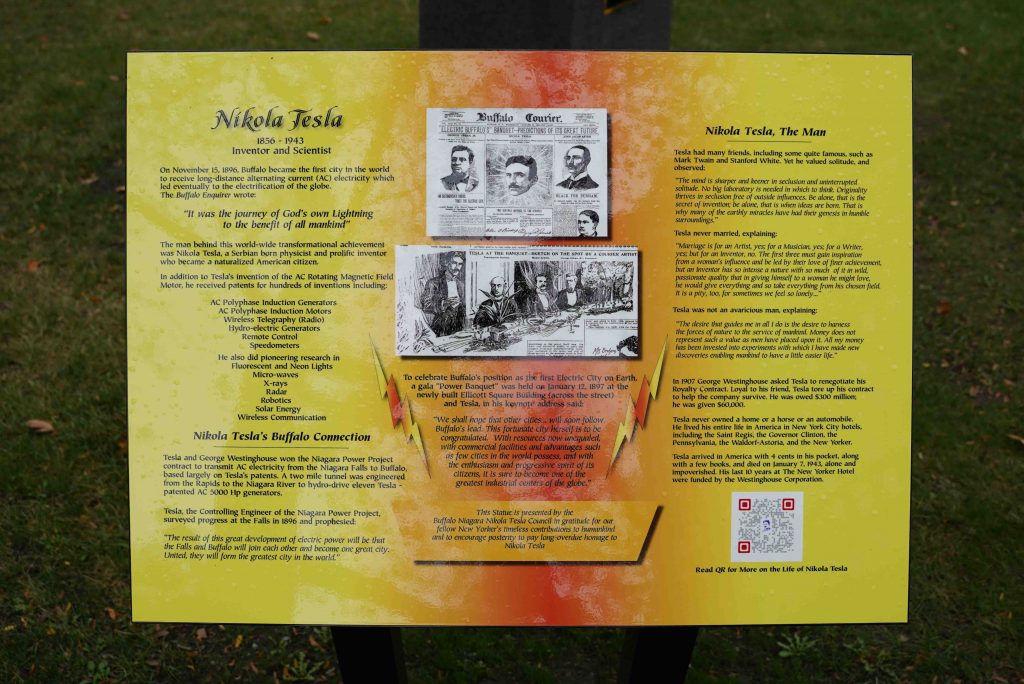 VBN: You’ve been the driving force to honor Tesla’s legacy in Buffalo; what’s motivated you to work so hard on behalf of his memory?

MM: Nikola Tesla is perhaps the greatest inventor of all time and gave the world so much, surpassing even his arch rival Thomas Edison. His greatest achievement and pinnacle of his career took place in Buffalo and the Niagara region with the beginning of long distance AC power transmission. Our city has for too long neglected to pay tribute to him and I knew deep in my heart that to properly do so would be a major boost for Buffalo’s image. Tesla is smart. Tesla is cool. And Tesla was a New Yorker. I’ve encountered too many people in my travels that think of Buffalo as a backwater snowed-in rusted out place. I guess in my mind I just had to show them wrong and Tesla became for me a big piece of that mission. Our community is rich in achievements, scientifically and culturally far beyond its comparatively small size. We can build on the Tesla legacy to develop our region as the Center of the Nikola Tesla Universe. It’s good for our outward image, our tourism industry and our collective self-esteem.

VBN: Tesla seems to be an emerging hero in the 21st century; what about him fits this moment and appeals to our current sensibility?

MM: Tesla was far ahead of his time in not only being a strong advocate of green energy, he researched and strove for FREE green energy utilizing the limitless power contained in the ionosphere. Besides being the king of all nerds, the man was altruistic. He didn’t care about making money, only using it for the betterment of mankind. He always focused his brilliance on improving the lives of everyday people through engineering and invention. He loved animals and was a vegetarian long before it was fashionable. Speaking of fashion, Tesla’s style sense was impeccable. He was a tall slender handsome fellow. Nearly 80 years after his death he’s a top influencer and iconic figure of the highest order.

VBN: If people want to experience more about Tesla in our region, what else can they do?