This time of year, we tend to do a lot of reflecting on the history and events that charted the course to our freedom and life as we know it today. Paying tribute to the service and sacrifice of the Armed Forces is a rite of passage for many Americans and even visitors alike.

Buffalo is a place bursting with pride and patriotism, and is also a place where countless veterans, and wartime relics, call home. Arguably the most prominent pieces of military history are on display at the Buffalo & Erie County Naval & Military Park. 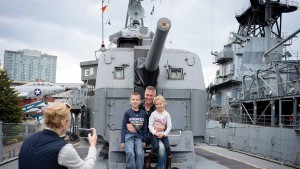 Anchored alongside the hotbed of fun that is Canalside are three decommissioned battleships that launched in the 1940s and saw more than their share of battle. The USS Little Rock, the only guided missile cruiser open to the public; the destroyer USS The Sullivans, designated a National Historic Landmark in 1986; and the USS Croaker, a submarine that sits on the National and New York State registers of historic places; have served on countless missions, on waters thousands of miles away from home. Today, they’re open for you to see and experience their stories first hand.

A visit to the Naval & Military Park is surreal. You get to walk the same tight hallways and through the various decks and control quarters that the service men and women did 75 years ago. It’s amazing to get a glimpse of life onboard – how they ate, slept, communicated, controlled the ships, etc. It’s a far cry from the cushy technology we have today, something that makes these ships – and their war stories – all the more special. 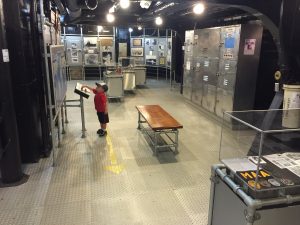 The ships were left just as they were when they were in service, which can be enough to satisfy any visitor. But in addition, there are numerous educational displays, tributes and memorials, interactive sections, and even some sound effects that activate (and scare the bejesus out of you) as you move through the cabins.  And I’ll throw in a public safety announcement for everyone: DUCK! The low ceilings and doorways can deliver a nice goose-egg if you’re not careful!

Back on solid ground, there are a few museums (including one in a hangar building), simulator rides, a gift shop (“Ship’s store”) and a lengthy row of war and service monuments. All in all, the experience is fun and educational at the same time, but also humbling and even a bit somber. But as you leave, you’re sure to be feeling grateful you came and grateful for those that made it all possible.