Spring might seem like it’s just around the corner these days in Buffalo, but you know winter is going to give us at least a few more wallops—it’s only early March, after all. But there’s a bright side to the cold temperatures that are inevitably around the corner: it means there’s still time to try out your curling skills at the Ice at Canalside.

Two curling lanes are available to reserve by the hour at the Ice at Canalside during open skate hours, with a minimum of 4 people and a maximum of 10 people per lane. Check their website for hours and special holiday events. 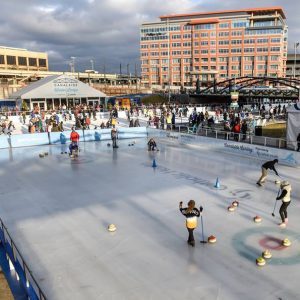 With the oddly enthralling spectacle of Olympic curling in our minds, I asked my husband and two game friends to join me at Canalside to test this unique sport out for ourselves. Our instructor, Amanda, helped us check in the Curling pavilion (which includes signing a waiver—you can access it online to help speed up the process), then led us onto the ice.

We were glad to find that curling—often described to novices as shuffleboard on ice—can be enjoyed by people at any skill level. Amanda showed us the basics to get us started. 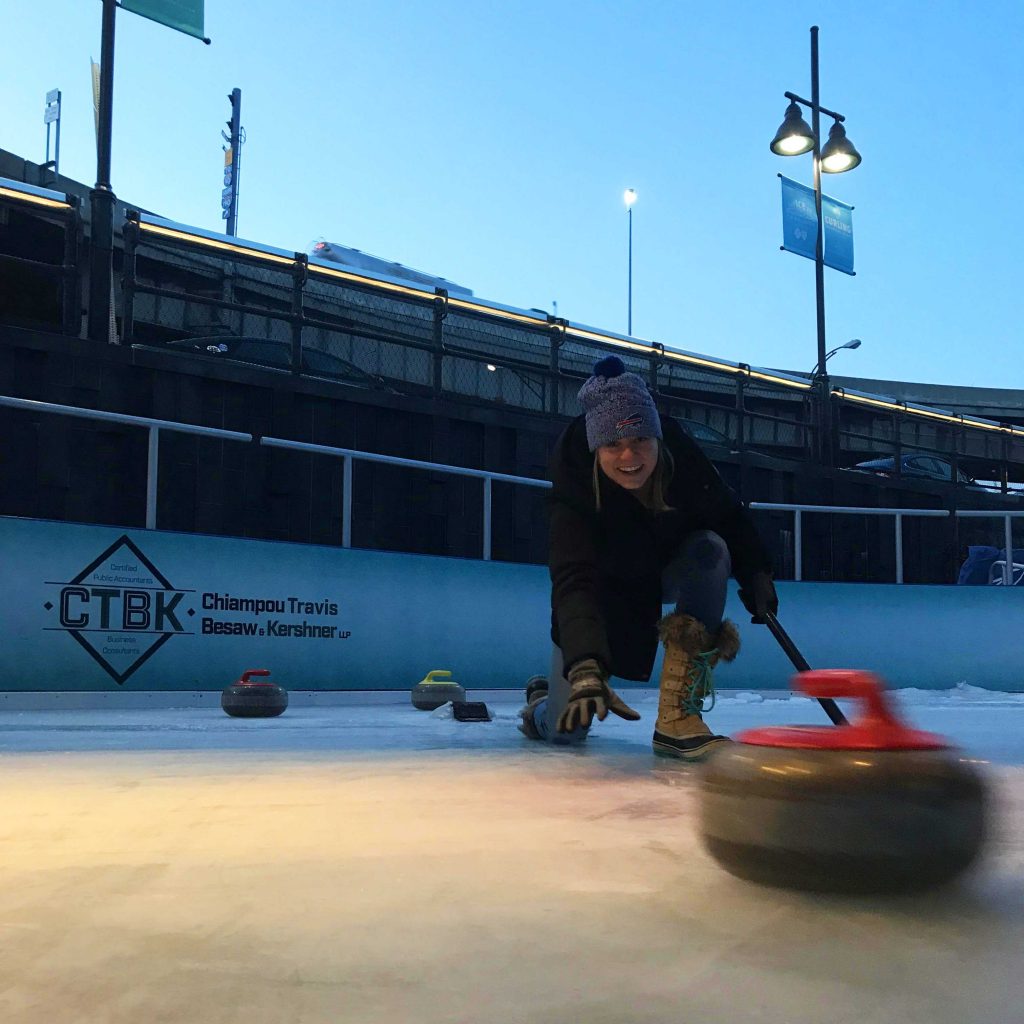 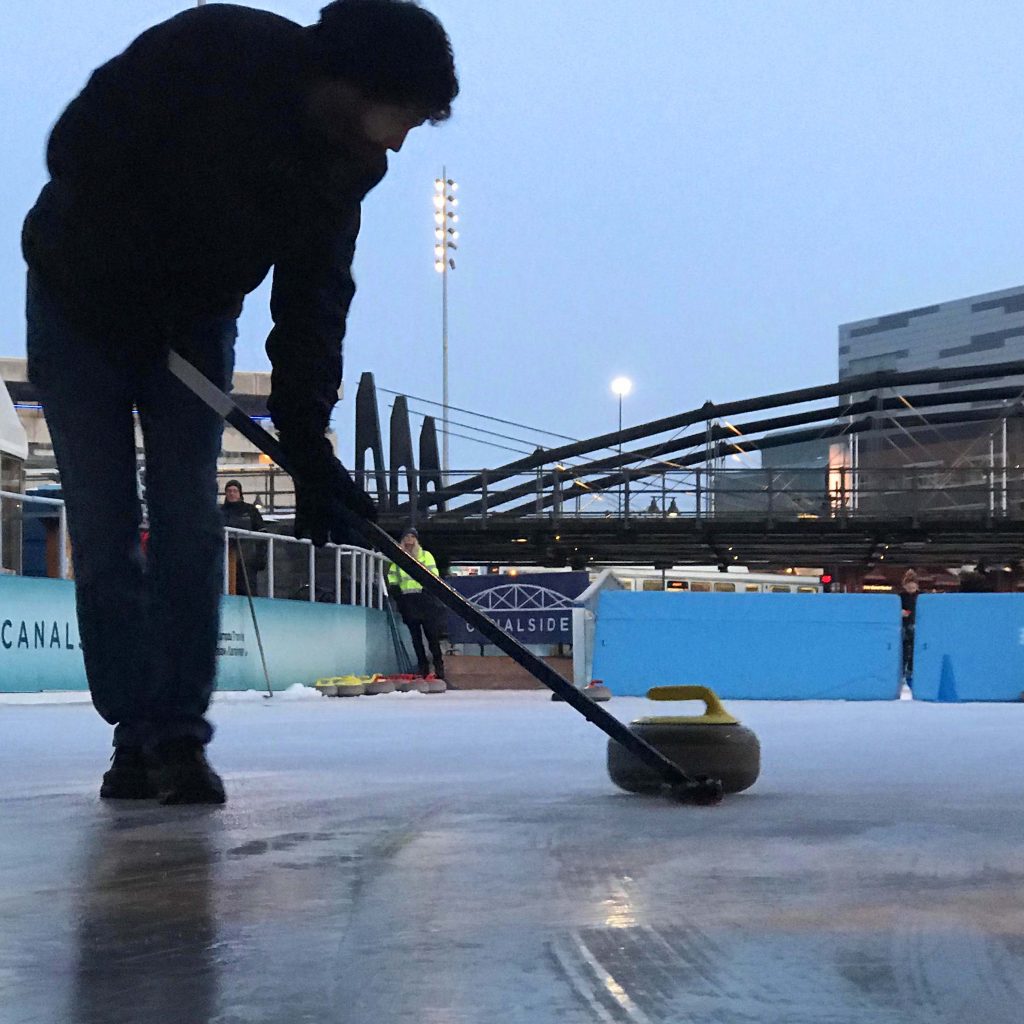 With one foot braced on a hack—similar to a track runner’s starting block—you push off and heave the 40ish-pound curling stones across ice to a bullseye (called the house) that’s about 100 feet away. The object is to slide your stones—there are 8 per team—as close to the center of the bullseye (the button) as possible, while strategically bumping your opponents out of the house if need be.

The other part of the game—the most hilarious one, we thought—is the sweepers. The teammate(s) of whomever is throwing their stone is stationed close to the far house armed with a tiny broom. Sweeping the ice furiously right in front of the stone as it cruises in can help keep it going and influence where it stops. 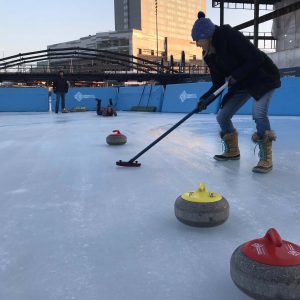 Those stones are way heavier than we expected and required some “oomph” (and a few belly flops onto the ice) to get them going, and we started out playing half-court curling while we figured it out. However, it didn’t take long to acclimate, and after a few rounds we switched to the full lane. 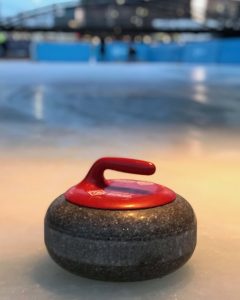 The thumping music, curious skaters pausing to check out our game and the sunset-illuminated skyline looming over all made for a wonderful atmosphere. The hour went by in a flash, and we were sad to see it end. We walked away with rosy cheeks, bruised knees and satisfaction that we had tried a new little slice of Buffalo in its wintertime glory.

Curling at Canalside costs $10 per person on weekdays and $15 on weekends and holidays. Pre-reservations are strongly encouraged (make them here) but walk-ons are also welcome. Staff ask that you get there about 15 minutes early so the paperwork doesn’t cut into your playing time. 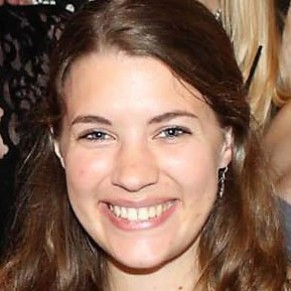