Curb appeal. Every home needs it. Every home owner wants it. It’s that extra something that a passerby can’t ignore. The splash of color or texture that draws the eye in and sets a home off from its neighbors. Now, you wouldn’t think a National Historic Landmark like the Frank Lloyd Wright’s Martin House would need a little extra panache, but that’s exactly what it once again has – a crescent of flowers intended to bloom from April through October that’s the crowning touch to the restoration of this great American home. In springtime, more than 7,000 blooming bulbs put on a spectacular show for visitors to Buffalo’s Parkside neighborhood. 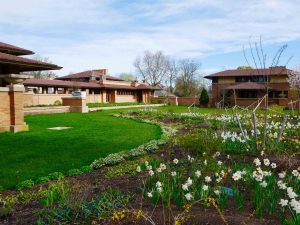 Called a “floricycle” by Frank Lloyd Wright, this semi-circle of blooming bushes and flowering plants was part of the original design for the house, which was completed in 1905. The lush landscape separated the home from the street and created an extension of the veranda overlooking the corner of Summit Avenue and Jewett Parkway. This blending of interior and exterior spaces was a signature of Wright’s and, if the photographic record is to be believed, the Martins loved spending time and celebrating family events in their outdoor “room.”

Like other portions of the campus, the Martin House gardens were destroyed or lost to neglect over time as the house was abandoned and then changed hands in the intervening years before the Martin House Restoration Corp. took on the challenge of restoring the once great estate to its former glory in the mid-‘90s. The rehabilitation of the gardens represents the capstone and completion of that 25-year endeavor and visitors are finally able to fully experience the vision Frank Lloyd Wright had for the Martin property. 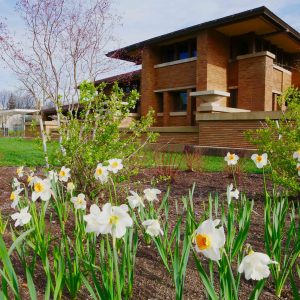 The gardens provide an opportunity, whether from a car, a bike or on foot, to see the creative genius of Frank Lloyd Wright in full flower.