Prior to Prohibition, Buffalo had 29 breweries, and Iroquois Brewing continued to fill local mugs with high-quality lager until 1971. Today’s breweries are also adept at making quenching lagers and pilsners, plus traditional styles that sing with well-sauced chicken wings.

They’re done exceptionally well at Old First Ward Brewing (73 Hamburg Street, 716-855-8948; genemccarthys.com) where head brewer Bryan Kirchmyer turns out hugely flavorful, banana-scented hefeweizens and so-good-you’ll-sigh German lagers that are cold-aged for up to 12 weeks, including an unfiltered kellerbier. When the weather’s swell, we recommend enjoying a few on the patio.

Your next goal is Beltline Brewery & Kitchen (545 Swan Street, 716-402-1756; belt-linebrewing.com). It takes its name from the hard-working train line that ferried locals and freight around Buffalo in the late 19th and early 20th centuries. Now, the namesake is a sunny, window-filled brewpub with a vegan-friendly kitchen which focuses on “good, clean craft beer,” according to head brewer Erik Greiner, including the brewery’s best seller: a German-style kölsch brewed with honey.

Here’s your next stop: Flying Bison Brewing Company (840 Seneca Street, 716-873-1557; flyingbisonbrewing.com), located a half mile east and the city’s first production brewery since Iroquois Brewing shuttered. Owner and brewer Tim Herzog does solid by the classics, which you can taste-test by the flight. Go for Rusty Chain, an Austrian-inspired amber lager that’s one of Buffalo’s more popular beers; the baby-soft Buffalo Kölsch 716; and Larkin Lager, a German-style Munich helles that gets its crispness from 40 days of cold aging.

Lastly, make hay to the welcoming Community Beer Works (520 Seventh Street, 716-759-4677; communitybeerworks.com), started in 2012 by a collective of local homebrewers. Over the years, CBW has grown from a wee system that couldn’t supply enough beer for a kegger to a 20-barrel system—that’s nearly 5,000 pints per batch—turning out crowd-pleasers, none looming larger than the Whale. It’s a toasty brown ale that recalls toffee and coffee, a chameleon for all seasons. 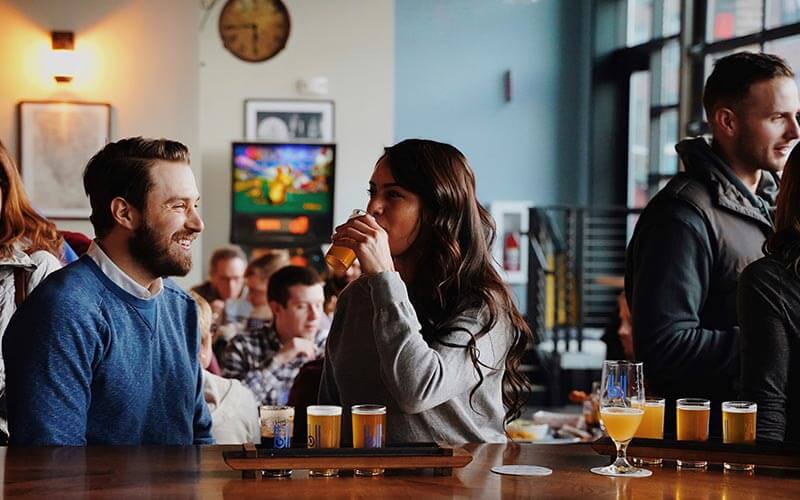