For as long as I can remember, chicken finger subs have been a fixture of my Buffalo diet.

As a high school student at St. Joseph’s Collegiate Institute, I looked forward to them on the cafeteria menu every Wednesday, complete with an ample helping of shredded iceberg lettuce and slightly melted mozzarella cheese on top. Years later, the perfect late night snack after a couple of pops at Founding Fathers Pub was the “Jim’s Bleu” sub at Jim’s Steakout, which smothered their fingers in hot sauce and topped them with blue cheese before placing them on a Costanzo’s roll. 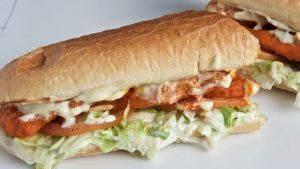 I always associated these sandwiches with our city, but never thought they were from here until I read Arthur Bovino’s  book, Buffalo Everything: A Guide to Eating in the “Nickel City”. Bovino, a veteran food writer based in New York City, traveled to Buffalo for several weeks at a time in 2017 to exhaustively research our culinary scene, visiting dozens of restaurants across our county and unearthing previously little-known stories.

One of those is the origin of the chicken finger sub, which Bovino uncovered by talking to Gene Mongan, one of the co-operators of John’s Pizza and Subs in the town of Tonawanda. Mongan began working at the restaurant in the early 1980s, and noticed that breaded chicken tenders a la carte shaken in hot sauce and served with bleu cheese on the side – a riff on the Buffalo wing – were an especially popular menu item. So the staff at John’s began serving them on sandwich rolls, and called their creation the chicken finger sub. 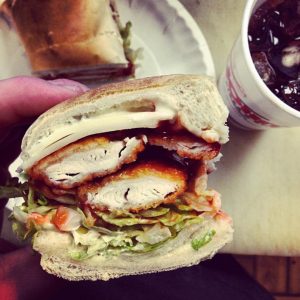 John’s Pizza & Subs claims their CFS is the original.

“People would come up and be like ‘What’s the chicken finger sub?’ and we would explain it to them, but usually by the time we were done explaining, they’d have already ordered it,” Mongan told Bovino.

Jim’s Steakout also states on its website that it began making “the unheard-of chicken finger sub” around that same time. But the owners of John’s maintain they have all the proof they need to stake a claim as the originator, Bovino noted.

Either way, all signs do point to Buffalo as the creator of this sandwich; most of the top Google search results for the sub link directly back to our city. And nearly 40 years after John’s started making them, the sandwich can be found under the “hot subs” menu listings of most pizzerias and sandwich shops in the area.

Perhaps the chicken finger sub can join the ranks of wings, beef on weck sandwiches, “cup and char” pizza, sponge candy and pastry hearts as a Buffalo culinary classic. Who knew?