It’s one of the longest running and hotly (in the most literal sense) contested debates in Buffalo: whether Duff’s or Anchor Bar is the king of the Buffalo wing originators.

Anchor Bar first created the Buffalo wing in 1964, but Duff’s Famous Wings developed its own loyal following soon after. The restaurant has been a Buffalo staple for more than half a century, first opening its doors in 1946 at the corner of Sheridan Drive and Millersport Highway in Amherst, and serving up its first wings in 1969. Since then, their famous wings have spread across the border to Toronto and as far south as Texas.

Duff’s, which changed its name in 1985 to Duff’s Famous Wings in recognition of its growing reputation, is known for its heat. Warnings are found across the restaurant, from the menus to the servers’ T-shirts, explaining that their wings are hotter than usual. Order the medium sauce and you’ll receive hot wings. Order hot wings, and you might give your tongue first-degree burns. Their death sauce is only for the brave of heart.

I visited the original location – still nestled on the corner of Sheridan Drive and Millersport Highway – for lunch. The red and white building is nondescript; the only marker being its name spelled in large red letters along the side. 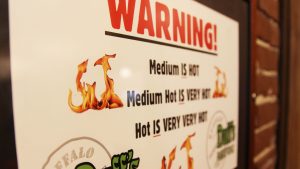 Go inside and the no-frills-design continues. Just chairs, tables topped with salt and ketchup for your sides, and a few pictures along the walls of the restaurant in the 1940s. There is plenty of seating and in the front sits a small bar. The menu is equally simplistic. While there are a number of sandwiches to choose from, Duff’s knows why you’re there. The wings are the focus here.

Wings can be ordered with either barbecue or Buffalo sauce. The Buffalo sauce is offered at eight different levels of heat, ranging from mild to the death sauce. Having virtually no tolerance for spice, I ordered the medium light. 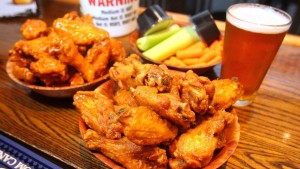 I took advantage of the lunch special, which includes five wings and a side – either fries, onion rings, salad, soup or chili – for less than $8. But if you’re looking for more, there is another deal for nearly $15 that offers 10 wings and two sides. There are also a number of daily specials that provide 20 wings, a large order of fries, and your choice of pop or beer.

The restaurant is one of the most visited in the region, but service is still quick and friendly. My wings came out in no time, and were served with a generous portion of fries, celery, carrots, blue cheese and a small bucket for tossing away bones. I ordered the mozzarella sticks as well. The wings were cooked to perfection, with the sauce offering tons of flavor and a hint of spice. The small mountain of fries were also fresh and crispy.

No matter whether you side with Anchor Bar or Duff’s in the original wing debate, we can all agree that Duff’s reputation for making a great chicken wing is rightfully earned.

Check out Duff’s and 12 other excellent wing joints on the Buffalo Wing Trail!