You don’t need to book a flight to Rome to enjoy a rich bowl of carbonara or a hearty plate of lasagna. Buffalo has no shortage of choices for pasta lovers.

And if you’re looking for your spaghetti fix, venture no further than Chef’s, Buffalo’s storied Italian restaurant that has called the corner of Seneca and Chicago Streets home for nearly 100 years.

The restaurant, opened in 1923, still evokes the nostalgia of a homey, family-owned eatery. The tables are covered in red and white checkered tablecloths, and the walls are adorned with photos of famed athletes, politicians and journalists who’ve doubled as customers. 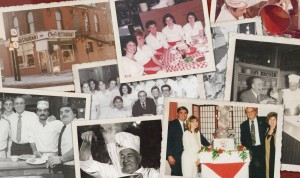 Two additions to the building over the years now allow the restaurant to seat more than 300 people. But don’t worry about parking; the restaurant has two large lots to appease the crowds. Despite the size, Chef’s feels full of life as customers fill the rooms to feast on their signature dishes.

No item on the menu has garnered more fame than Chef’s spaghetti parmesan. The dish features a mound of spaghetti coated with their equally famous pasta sauce, all covered in a hefty layer of parmesan cheese that stretches endlessly. For an extra three or four dollars, you can add meatballs, sausages or mushrooms.

The dish was born in 1962 when Chef’s owner Lou Billittier was having lunch with Dave Thomas, the host of WKBW children’s show Rocketship 7. In the mood for something other than their usual spaghetti, the duo added butter and melted cheese to their noodles. The idea stuck and has been a staple at the restaurant since. 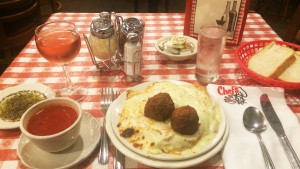 Spaghetti Parmesan comes in three sizes: large, small and an extra small, which is also served as a lunch special. At first tempted to order the large, I instead opted for the small after my waitress advised me that going for the bigger size would guarantee that I would take leftovers home.

She was right. Don’t be fooled by the word; the small is still a generous portion for one and the large is better ordered as a shared dish. I also spent the few extra dollars for protein, because what’s a spaghetti dish without meatballs?

The dish lived up to every bit of the hype. The thick coating of parmesan entangled with every twist of a fork would make cheese fanatics rejoice.

The standout, however, was the sauce. There’s a reason Chef’s has a store within the restaurant for guests to purchase jars of their signature sauce. One spoonful is enough to make you swear off store-bought marinara for life.

Armed with a fork and bib – the restaurant uses these in place of napkins – I only managed to finish half of the small plate and boxed the rest up to finish at home.

In addition to the excellent food, another attraction that keeps customers coming back to Chef’s is the affordable prices. Glasses of wine are available for less than six dollars and few items on the menu exceed $15.

Hunker down at Chef’s for a plateful of spaghetti goodness. Your taste buds will thank you.