Buffalo’s Chippewa District has been many things to numerous generations of Buffalonians.

To the city’s earliest occupants, it was a vital part of Joseph Ellicott’s early-1800s street grid. To those in the 1960s and 70s, it was a stretch of dim bars and red lights — Buffalo’s seedy underbelly. In the 1990s, it was reborn as the Chip Strip, where college students, city dwellers and visitors alike bar-hopped and binged into the earliest hours of the morning.

Today, Chippewa is in the midst of yet another transition. Led by the Chippewa Alliance—a non-profit comprised of neighborhood leaders who are intent on being the driving force for beautification, economic development, and safety in their community—major changes have been made over the past two years, including long-awaited improvements to its central streetscape, sidewalks, trees, and lighting. Enabled by a $3 million State of New York grant—as well as contributions from local businesses like Labatt and Evergreen Health, and planning assistance from nearby Cannon Design—the enhancements have refreshed an area that’s headed in a more multifaceted direction that its past personifications, with plenty of bigger plans still on the horizon.

“We want to show that this is the heart of the city,” says Rachel DiDomenico, President of the Chippewa Alliance. “We want to connect this entertainment district with the Theatre District, Buffalo Convention Center, and all the area hotels so they know this as the heart. I think we’re achieving that.”

That was the motivation behind the initial creation of the Chippewa Alliance in 2014, to establish its district as the rightful center of city activity. Built on the foundation of the district’s drinks-and-entertainment roots, the Alliance is rebuilding a familiar locale, but into a complete neighborhood that appeals to full-time residents as well as visitors.

The Chippewa Street strip has always been a place to drink, but in recent years, the proliferation of unique dining options has made the district as intriguing to the after-work dining crowd as it once was (and still is) for the after-midnight contingent.

“We’ve created a restaurant experience that the city can be proud of, one that’s nationally recognized,” says Brian Mietus, chef and owner of Bacchus Wine Bar & Restaurant, nestled in the historic Calumet Building at the corner of Chippewa and Franklin. “We offer something out of the ordinary.”

Bacchus isn’t alone in this respect. Unique dining options abound for those looking for a taste of everything. Places like Frankie Primo’s +39, Patina 250, Buffalo Chophouse and Chez Ami inside the Curtiss Hotel have created fine dining options now considered among the best in the city. Popular mainstay Soho has recently augmented its kitchen with the addition of famed “Nickel City Chef” winner JJ Richert; The Banshee (formerly D’Arcy McGee’s) now offers downtown’s only menu of traditional Irish dishes; and at the Elmwood Avenue end of Chippewa, lunch and dinner crowds can smell the famous charcoal burn of Ted’s Hot Dogs, grilled to perfection.

And for those who need to grab and go, there are new spots like b-Side Market, with its signature rotisserie chickens and sauces joining a variety of deli sandwiches, soups and salads for downtown workers, residents, and those intent on driving a taste of the new Chippewa District past Buffalo’s city limits.

Live music back in the mix

Historically, Chippewa is no stranger to live entertainment within its bars and clubs, whether via exotic dancers, cover musicians, or the deceased Continental, an infamously dirty rock club who regularly hosted a once-irreverent Buffalo trio named the Goo Goo Dolls.

With the opening of the intimate (yet amplified) Rec Room in 2018, guitars, bass and percussion of original musicians have returned to the strip, and is now a part of its present and future.

“Live music is something that we think is super important for the district and culture of the city,” says Chris Ring, owner of Rec Room. “Over the [recent] years, no one in the area really focused on live music; they were more in the DJ world. We saw that and thought there was a unique opportunity for us to come in and do something a little different, yet something that could still complement the street.”

Since opening, Ring’s Room has diversified its regular schedule of touring acts to include such fan favorites as Live Band Karaoke and “Dueling Pianos” dinners, all while showing what such music-related events can bring to the district. Bars like Soho and The Banshee have followed suit, with the former’s Soho Live hosting bands on their rooftop patio every Wednesday all summer, and the latter planning live Irish music four nights a week (with local and touring musicians) on their indoor and outdoor stages to diversify the area’s offerings even further. In addition to these options, the Chippewa Alliance is planning to host more live music outdoors as part of block party-style events throughout the warmer months.

“We think it’s important to create special events, monthly or even weekly events that can bring new people to the area, or even keep the ones here who happen to be at work or live in the neighborhood,” said Ring, also a board member with the Alliance. “This kind of programming is an economic incubator for the area.”

Building a neighborhood beyond nightlife

Diverse dining and drink options, live entertainment and a tree-lined streetscape have set up Chippewa for success as a downtown destination—but what happens to the traditionally nighttime district in the daytime?

With more businesses, hotels and residential space rising within walking distance of the street, bars and restaurants now have more motivation to complement places like Spot Coffee, Rachel’s and Bocce Club Pizza with daylight hours of their own.

“We want to feel like a vibrant, downtown neighborhood,” says DiDomenico. “In a perfect world—and we’re already starting to see it with some of the businesses—we want everyone to see and treat one another like neighbors, and help each other.”

And this cooperation is leading to big things. Now, with a new look and collaborative leadership, the famed Chip Strip is creatively evolving to become the 24-hour district its Alliance leaders know it can be—all beating at the center of the City of Good Neighbors. 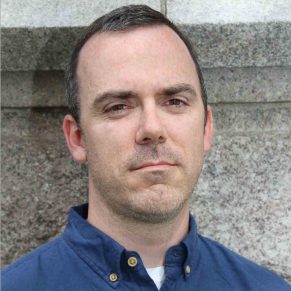