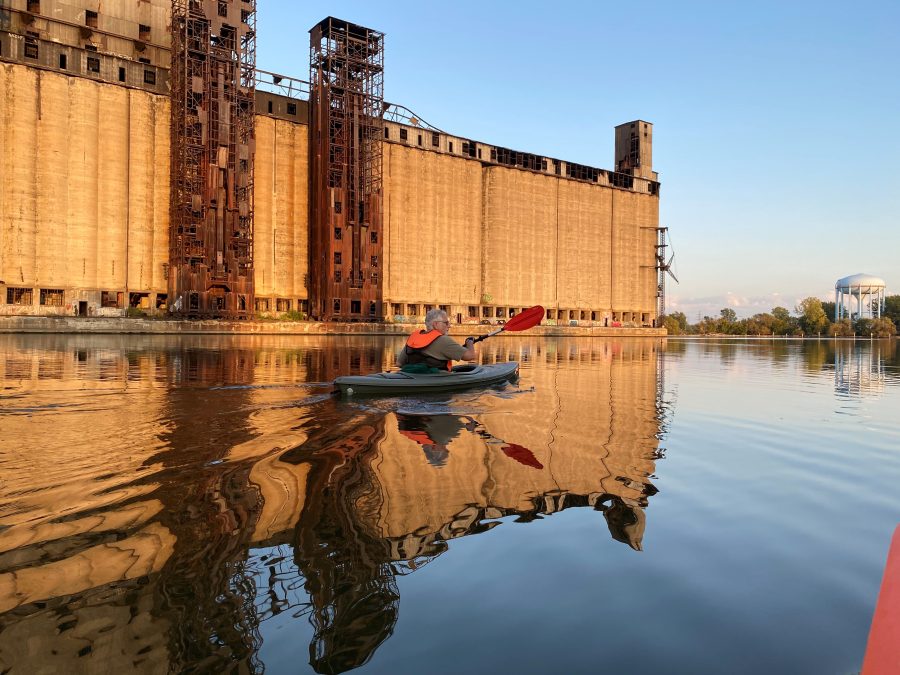 Canalside is the epicenter of Buffalo’s waterfront revival – a formerly deserted stretch of the Buffalo River that now buzzes with activity, particularly in the summer months. You can rent a kayak, paddle board and water bike, take a yoga class or a Buffalo River History Tour, jump on the Queen City Bike Ferry to the Outer Harbor and its miles of hiking and biking paths or just get your Zen on in a Buffalo sunset chair, enjoy an ice cream cone at Clinton’s Dish or grab lunch at Liberty Hound. And if you bring the kids, stop by the new Ralph C. Wilson Explore ‘n’ More Children’s Museum, a state-of-the-art place to play and learn, after taking a tour of World War II-era ships at the Buffalo Naval and Military Park. The newest additions to Canalside can be found at either end of the boardwalk. At one end, you’ll find the Buffalo Heritage Carousel, a vintage 1920s carousel manufactured in nearby North Tonawanda that spent years in storage before being returned to its former glory after years of painstaking restoration by a group of dedicated volunteers. It’s a child’s dream come true. On the other end of the boardwalk, the Longshed at Canalside is home to a project commemorating the upcoming 200th anniversary of the completion of the Erie Canal. Inside the Longshed, you’ll find a team of boat builders and volunteer helpers building a replica of the historic Seneca Chief packet boat – the vessel that Gov. DeWitt Clinton sailed on during the inaugural trip down the Canal in 1825. It’s free and open to the public.

Immediately adjacent to Canalside you’ll find Erie Basin Marina. A fleet of sailboats and high end motorboats bob in the waves where Erie Canal packet boats once tied up after the long trip across New York State. Today, this area is home to some of Buffalo’s most desirable real estate — condos, townhouses and apartments with spectacular views of the legendary Buffalo sunsets over Lake Erie. For the visitor, Erie Basin Marina is a great place for a stroll along the Lake Erie shoreline. Walk through the Marina’s test gardens, one of the most colorful and fragrant parcels in all of Buffalo, stop at the Hatch for an ice cream cone or charbroiled hot dog, or hop on board the Miss Buffalo for a cruise around the lake. Dinner at Templeton Landing and cocktails on their patio overlooking the marina is the perfect way to end a Buffalo summer day.

In a city that abounds with examples of restoration, re-use and re-birth, the Buffalo River may be Buffalo’s signature success story. Today, the water is cleaner, the shoreline habitat has been restored, wildlife has returned (watch for red tail hawks, blue herons and white-tailed deer) and residents and visitors have taken to the water like never before. At Buffalo Riverworks you can zipline between grain elevators, rock climb to the top of a silo and then grab a freshly-brewed beer. Across the river, Buffalo Riverfest Park is home to concerts, festivals and the Tewksbury Lodge restaurant. Further upriver, you’ll come to Silo City where you can take an Explore Buffalo vertical tour of one of the towering grain elevators, see a summer concert or theatrical performance and grab a cold one at Duende. At Mutual Riverfront Park, you can rent a kayak and paddle the concrete canyon of Elevator Alley and then head over to Gene McCarthy’s or the Barrel Factory to quench your thirst. Experience how the Old Buffalo is becoming the New Buffalo on the Buffalo River.

The Outer Harbor is Buffalo’s nearest faraway place – an easily accessible (via the Queen City Bike Ferry from Canalside) stretch of Lake Erie waterfront that’s perfect for recreation, relaxation and peaceful contemplation. The Outer Harbor stretches for hundreds of acres from the tip of Lighthouse Point, home of the iconic 1833 Lighthouse, to the Union Ship Canal where kayakers and fishermen ply the waters that were once home to iron ore docks and blast furnaces. In between, you’ll find hiking trails and boardwalks at the Times Beach Nature Preserve, a beach, beer garden and kayak rentals at Wilkeson Pointe, mountain bike dirt paths, a paved pump track and skills loop at the Lakeside Bike Park (be sure to grab a photo of the massive Flat Man sculpture), charter boat rentals and some of the best bass fishing in North America at Safe Harbor Marina, a state-of-the-art playground at Buffalo Harbor State Park and miles of hiking trails, viewing platforms and secluded overlooks at Tifft Nature Preserve.