Boasting not one, but two St. Patrick’s Day parades, Buffalo celebrates the heritage of its large Irish population with a weekend of celebrations eclipsing the majority of cities in the United States.

The folks at Departures Magazine, a Travel + Leisure publication, looking for the top St. Patrick’s Day events across the country, discovered that Buffalo is one of the best places to partake in St. Paddy’s Day shenanigans. 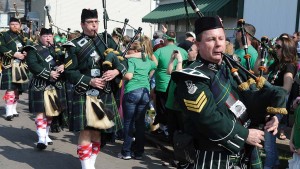 Among the company of cities like Chicago, Boston, Philadelphia, New York City and more, Buffalo was selected as one of the top nine St. Patrick’s Day parties in the nation.

Plan your hooley in Buffalo around the Old Neighborhood Parade on Saturday, March 16th. Taking place in Buffalo’s famously Irish Old First Ward neighborhood, the parade marches past some of the city’s premier pubs and taverns. But make sure to save some energy for the big St. Patrick’s Day Parade on Sunday, March 17th. Join tens of thousands of spectators clad in green, white and orange as a procession of floats, cars and bagpipes make their way down Delaware Avenue.

You can read the entire Departures round-up here: Where to Celebrate St. Patrick’s Day Across the U.S.