If the first couple days of the new year are any indication, 2019 is going to be a great one for Buffalo.

Three publications recently named Buffalo as their favorite places visited in 2018 and top travel destinations of 2019. They cited the city’s architecture, delicious regional foods, welcoming attitude and revitalized waterfront and neighborhoods as reasons to make the trek. The stories build off a record year in 2018 of media coverage about Buffalo, including coverage in The New York Times, Wall Street Journal and Sunday Times of London. 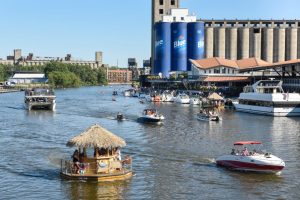 “In addition to being just 30 minutes from Niagara Falls, Buffalo is in the middle of a revitalization worth seeing for yourself,” writer Jamie Ditaranto explained in SmarterTravel’s “10 Best U.S. Cities to Visit in 2019” article.

Meanwhile, Julia Buckley, a Buffalo fan from across the pond, had her love for the city grow in 2018. “And then there’s Buffalo in New York State – a place that cast its spell on me so thoroughly that I went twice this year, two months apart. I fell for Buffalo the first time I came, in 2010; fell harder on a return visit in 2015; but now I’ve seen it in different seasons, and got to know it better, I’m completely sold,” Buckley stated in an iNews piece.

Matt Meltzer enthusiastically expressed his fondness for Buffalo in Thrillist and The Globe & Mail in 2018. Now, as a senior staff writer for Matador Network, Meltzer continues his Buffalo love affair in a recent article by stating, “This rust-belt city written off for dead half a decade ago was hands down the most fun I’ve had traveling solo anywhere, whether it was ziplining between old grain silos at Riverworks, scarfing wings along the historic Buffalo Wing Trail, or staying out way later than I should at the venerable Old Pink”.

As 2019 might just be the year of the Buffalo, it’s the perfect time to experience it for yourself!

You can read each full article here –

SmarterTravel: The 10 Best Cities to Visit in 2019

iNews: Where travel experts went on holiday in 2018