Aaron Bartley’s work as a community activist, labor organizer and co-founder of PUSH Buffalo has kept him at the forefront of a variety of political and social justice issues confronting Buffalo in recent years. So, it came as something of a surprise when he announced he was opening a new bookstore – Fitz Books and Waffles (43 Ellicott Street, Buffalo) – and beginning a new phase of his life as a small business owner and entrepreneur. We were curious about what prompted this change in direction and what his plans were for the newest addition to Buffalo’s vibrant literary scene. 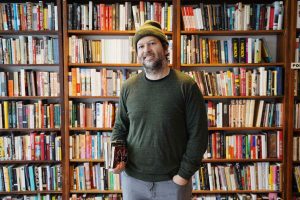 Visit Buffalo Niagara: What was your motivation for opening a bookstore?

Aaron Bartley: After more than twenty years of work with unions and community organizations, I got interested in the idea of working a “trade.”  As a 40-something with limited artistic and construction skills, the only viable “trade” I could come up with was the book trade.  I’ve been into books as a reader and idiosyncratic collector most of my life, starting with a pre-teen collection of baseball history books. My father is a book hound and was always on the lookout for book bargains growing up in University Heights. I have some good memories of taking the 8 Main downtown with my Dad to the annual Buffalo Public Library big book sale and coming away with paper bags full of books on obscure topics like polka music history and 19th century Russian social movements. And I learned that I love the hunt for vintage objects through my other collecting passion: mid-century furniture. Finding good books or good chairs in unlikely places is my kind of thrill. I started selling online, with a focus on art books, literary fiction and social movement histories, about two years ago, saw that I liked the various aspects of the work (including the grunt work, like the endless packaging for the mail market) and built an inventory. Once I had all the books, it seemed silly not to find a place for locals to buy them. 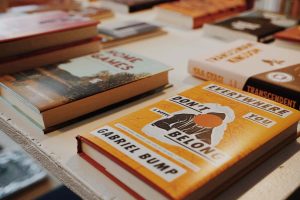 VBN: For people who love books, independent book shops often inspire great loyalty and sense of community; is that what you aspire to in opening Fitz Books?

AB: Yes, I’ve spent the past two decades working to build power and community at the grassroots. It’s exhausting work and I needed a break from the day-to-day intensities of organizational life, but a big appeal of having a bookstore is the idea of a “Third Space,” something we talk about in social movement circles as a place to build culture organically through activities that aren’t explicitly “political” but that build the consciousness and connections we need to overcome the rise of fascism and racism in Buffalo and beyond. So, post-COVID, that’ll mean book readings, collaborations with artists and, hopefully, waffles!  We’ve already built some good friendships with Buffalo writers like Gabriel Bump, who published an acclaimed novel this year, and photographers like DJ Carr and Tito Ruiz, whose photos are on our walls. We’re also collaborating with painter/printmaker/puppeteer Kyla Kegler. We sell her art cards at the front of the store. 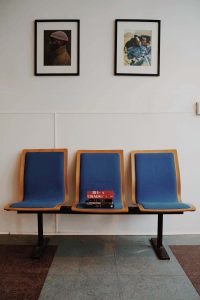 VBN: Some independent bookstores are local landmarks and even tourist destinations — City Lights, Shakespeare and Co., Powell’s come to mind — what are the ingredients that go into creating a really memorable bookstore experience?

AB: Yes, all three of those places are dear to me. They had an advantage of building a “brand” and a culture before Amazon made huge inroads and gained a near-monopoly in book sales, undercutting everyone on price. One answer, I believe, is to do things in the store that Jeff Bezos wouldn’t know how to do because he has never been motivated by a love of books. Careful curation, for example. FITZ is not trying to offer the comprehensiveness of Amazon or Barnes & Noble, but we assure you that we have a deep love, or at least affinity, for every single book on our shelves, new or used. I learned the value of intentionality and selection from my home bookstore growing up –Talking Leaves Main Street. I was lucky to live a block or two away from that store throughout my childhood. FITZ will stay on top of new releases and we’ll work to cultivate our sense of what fiction and art books are shaping the conversation and moving the culture in a positive direction, either by inspiring activists and organizers and communities to get organized, or by giving us a sense of the possible. 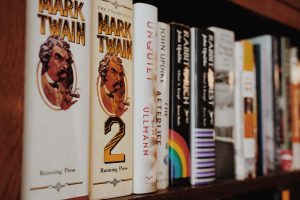 VBN: Many bookshops offer their customers coffee and grab-and-go sweets, but I’ve never heard of books and waffles being offered together before — why waffles?

AB: To be clear, we don’t have waffles yet. But as soon as we hammer out a few things with our space, we will. I fell in love with liege waffles, a Belgian waffle variant, at the public market in Cincinnati about ten years ago. They’re incomparably delicious, they don’t require syrup and they’re meant to be a street food, easy to handle. Stay tuned! 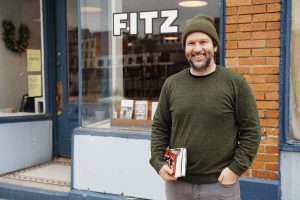 VBN: Finally, would you explain the origin of the store’s name?

AB: My mom’s maiden name is Fitzpatrick. Obviously, she’s a huge influence, but so were her brothers Brian and Kearney. Brian worked on this block alongside my mom for almost thirty years (at Maureen’s Buffalo Wholesale Flower Market) until he passed away in 2019, and he lived just around the corner on Oak Street for many of those years. He was a renegade in every sense, but a principled one. He built loving, caring communities in highly untraditional ways, often in derelict spaces and with people who, like him, were working to come to terms with their addictions and trauma histories. Throughout my childhood, Brian held court daily with folks from the Mission and other SRO downtowners in the 80s/90s era at the “player piano” McDonalds (now demolished) across from the Swiss Chalet on Main. That’s the “Old Buffalo,” something I like to keep alive. He was fierce, committed to antiracism, played a mean electric guitar and was as chatty as they come. Both Brian and my mother were influenced heavily by a third brother Jim Fitzpatrick, who read voraciously, had great taste and lived an outlaw life until he met an early end. Many books in my home library have FITZ inscribed on the fore-edge.