Buffalo’s mural game is strong, so strong in fact, that it’s hard to keep up with all the new additions that are adding color and dazzle to Buffalo’s streetscape. While the Buffalo AKG’s Public Art Initiative continues to lead the way, many private businesses, business districts and non-profits are adding to Buffalo’s portfolio of public art. Buffalo has become a museum without walls – get out and check out these new additions to our growing collection of murals.

The following murals are grouped by location. 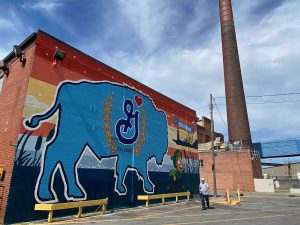 Alden native Nicole Cherry was hired by cereal manufacturer General Mills to create a visual tribute to the company and its connection to Buffalo. Completed in August 2020, the mural features a blue buffalo that measures 25 feet tall and includes visual references to the Lucky Charms and Cheerio cereals manufactured at the Buffalo plant. 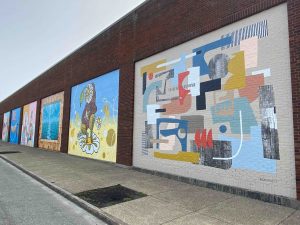 Over the course of two summers, 12 artists from Western New York and beyond are creating 12 individual murals on the South Park Avenue façade of the DL&W Terminal. The artists who completed murals in 2020 are: Obsidian Bellis, Jason Brammer, Lauren McKenzie-Pearce, James Moffitt aka YAMES, Ellen Rutt and Brad Young aka SALUT. 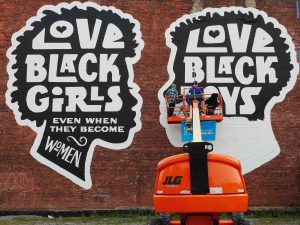 Edreys Wajed and James “YAMES” Moffitt are teaming up to create the newest addition to the Buffalo AKG mural portfolio. The mural challenges the disconnect between the assumption that children, including Black children, are essentially innocent while as adults they can be racially stigmatized as dangerous and undeserving of love and just treatment — told that their lives do not matter, often with deadly results. With this gentle challenge, Love Black stands as an important reminder that loving and respecting the rights of individuals must transcend age and race. 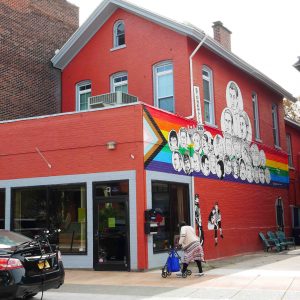 Buffalo-based artists Mickey Harmon and Ari Moore have created a new mural that recognizes the historic and ongoing struggles of the LGBTQ community. The mural features portraits of key national and local figures who played a role in LGBTQ history, including cultural producers, leaders, entertainers and advocates. 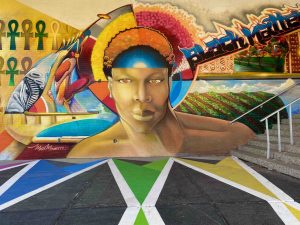 Black Matter is Life/As Is

D’Youville College commissioned acclaimed muralist Maxx Moses to create a mural that would elevate the issue of racial equality and justice on their campus. Moses is a New York native and SUNY Brockport graduate who has painted and exhibited his work around the world. “Black Matter is Life” accompanies a sidewalk mural, “As Is,” created by Buffalo artist Casey Milbrand for National Coming Out Day in 2019. 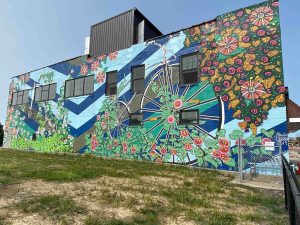 Completed in 2019, Buffalo-based artist Nicole Cherry’s exuberant and colorful mural will undoubtedly be seen by many more eyeballs as dramatic improvements – including a dedicated bike lane – are completed along Niagara Street. Her depiction of two high-wheeled bicycles is perfectly placed on the side of 1330 Niagara, the new home of a second Campus Wheelworks store. 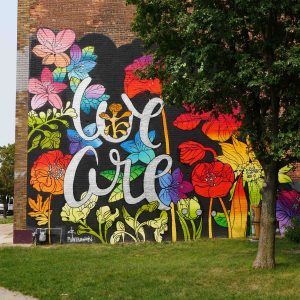 We Are/People of Black Rock

The Black Rock Riverside Alliance has created a new community park at the intersection of Niagara and Amherst Streets and its centerpiece is a massive mural by local artist Chris Piontkowski, “We Are.” The mural is complemented by a sculptural installation by Justin Dahl called “People of Black Rock.” 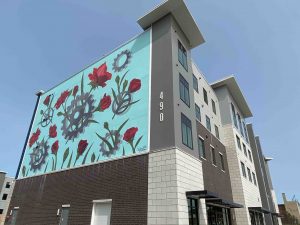 The Forge on Broadway

Located on the site of the former Buffalo Forge plant, the Forge on Broadway is a mixed-use complex that features a massive new mural by local artist Julia Bottoms. Bottoms was hired to create a tribute to the site’s industrial heritage as well as Dr. Rhonda Ricks, a civic champion of affordable housing. 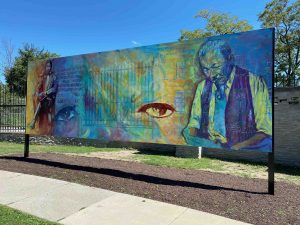 John Brent was Buffalo’s first African-American architect as well as the first President of the Buffalo branch of the NAACP. His life and legacy are celebrated in a new mural by Buffalo-based artist James Cooper III that can be found on the Park Road near Amherst Street adjacent to the rear of the Buffalo Zoo’s giraffe habitat. 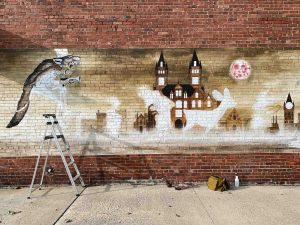 Hertel Avenue has more murals than any neighborhood in Buffalo and Queen City Procession is adding to the richness of that visual experience. Commissioned by Revolution Gallery, the mural is the work of pop-surrealist artist Joe Vollan, a native of Seattle who now lives in Buffalo, and features a fairytale parade of creatures, including Buffalo’s original public art superstar Shark Girl. 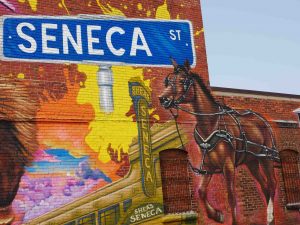 Rochester-based artist Justin Suarez was commissioned by the Coalition for a Vibrant Seneca Street to add some visual pizzazz to the rapidly re-developing neighborhood. 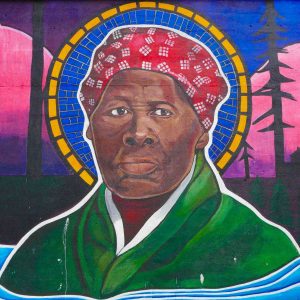 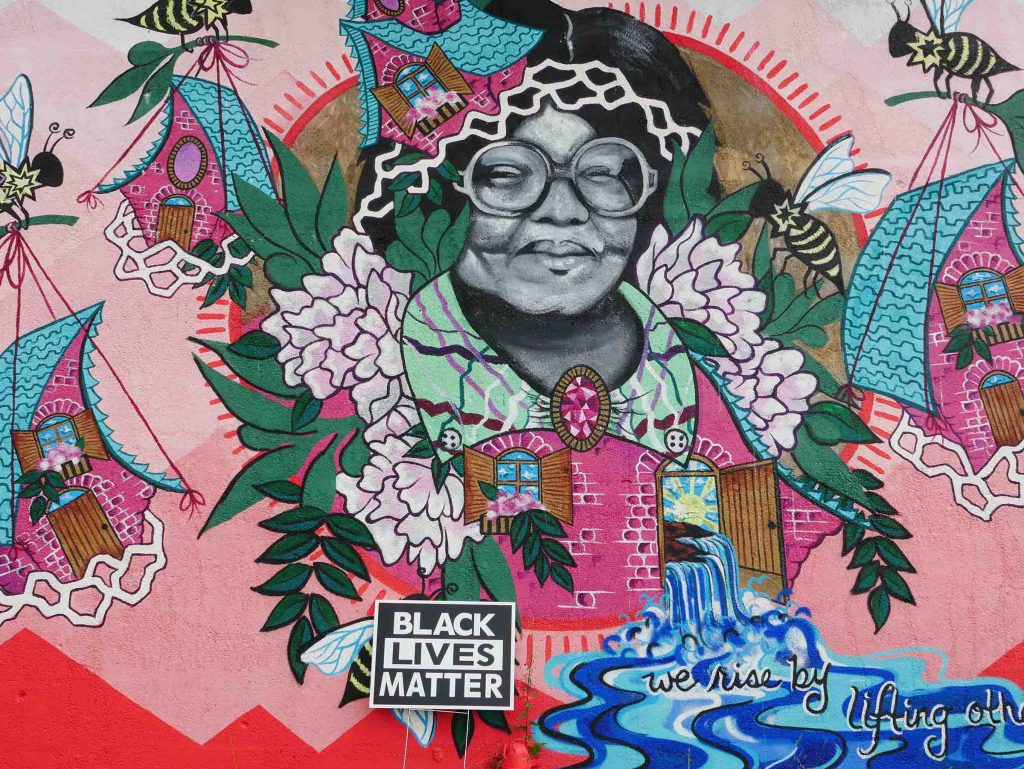 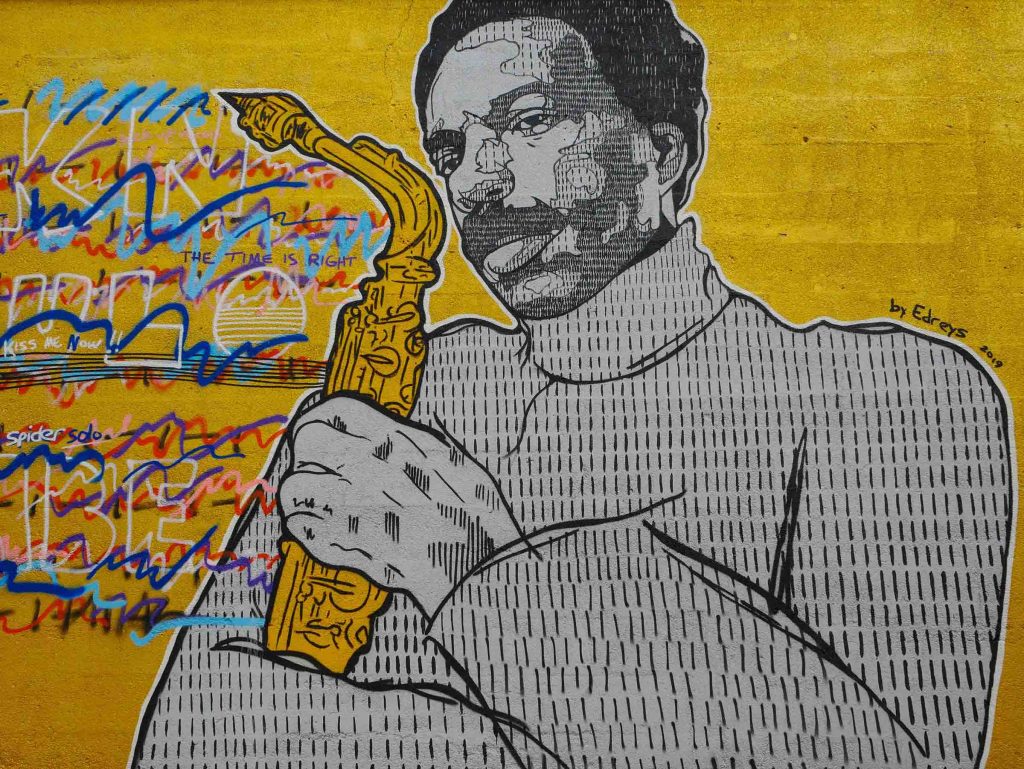