Within a span of just 36 miles, the Niagara River treats visitors to a show like nowhere else on the continent.

The river begins without fanfare at the eastern end of Lake Erie, quietly gathering strength from its freshwater neighbor against the backdrop of the Buffalo skyline. The current escalates in intensity as the river flows on, eventually frothing over as it approaches the falls. Then in a crescendo of mist, sound and fury, 150,000 gallons of Niagara flow over the falls per second and crash and churn in the rapids below. The river mellows before reaching its Lake Ontario endpoint that’s as serene as its Buffalo origins.

The falls grabs the lion’s share of visitors to the mighty Niagara, but intrepid visitors know the entire river is worth exploring. Here are 7 of the top ways to enjoy Niagara beyond the falls, where some of the region’s most unique hikes, parks, walking paths and trails can be found:

A View From the Water
The 1.5 mile-long Bird Island Pier takes you on a journey underneath the Peace Bridge connecting Buffalo with Canada, out to a viewing area for sweeping vistas of the city skyline and Lake Erie. As you walk along from the starting point at Broderick Park (reachable at the foot of West Ferry Street), the sounds of the city melt away, replaced by the cawing of birds and the bubbling of the river as it draws water from Lake Erie. Pro tip: it’s also the perfect spot to see the sun rise over the city.

Cycle Along The Shoreline
Rent a Reddy Bike and head to the western edge of the city to pick up the “Riverwalk” portion of the Shoreline Trail  – a 6.5 mile long path along the river that connects downtown Buffalo with the riverfront and Erie Canal in Tonawanda. A series of upgrades to the bike trail near the Peace Bridge — including a new bicycle bridge designed to look like our international span – was completed just last year. 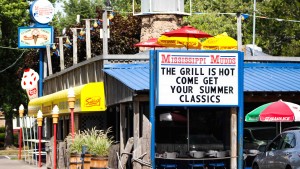 Grab a Bite
A series of restaurants dot the river as it winds its way north. The patio at Acqua has stunning vistas, while the River Grill in Tonawanda offers live music every night of the week from May to September. One of my favorite spots is Mississippi Mudd’s in the city of Tonawanda, where diners enjoy char-grilled hot dogs, sweet potato fries and Perry’s ice cream from a second-floor patio overlooking Isle View Park and the river across the street. Further downstream, The Silo in Lewiston serves steak subs from a converted coal silo and ice cream from a train caboose overlooking the river.

Park It
Grand Island is the only town in Erie County with two New York State Parks, both of which face the Niagara River. Beaver Island is the more developed of the two, with amenities like a golf course, picnic shelters and a seasonal beach along the river. Buckhorn Island offers nature lovers great opportunities to see birds and other wild life offer a prime opportunity to get away from it all for an afternoon – and be less than 15 minutes from both Buffalo and Niagara Falls. 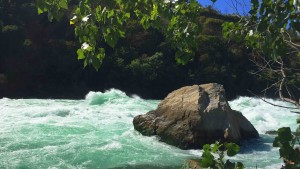 Hike The Day Away
Niagara’s other wonder is the gorge carved out by the falls over thousands of years. Whirlpool and Devil’s Hole State Parks offer incredible opportunities to see river up close as it crashes and churns its way through the Niagara Gorge following its trip over the falls just a couple miles upstream. A set of stairs in Whirlpool State Park and Devil’s Hole State Park take you to the base of the gorge as the river roars and splashes nearby.

Get Soaked
Hiking isn’t the only way to experience the class five rapids of the Niagara. Whirlpool Jet Tours, which launches from Lewiston, takes adventure seekers on a once-in-a-lifetime ride careening atop the powerful river on a roofless, high-speed boat that provides a thoroughly thrilling – and soaking – experience. Tours continue on weekends through Oct. 1. 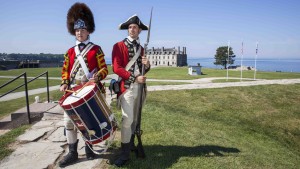 Step Back in Time
As the river approaches its terminus in Youngstown, it calms down again much like its initial origins in Buffalo. This strategic location – the confluence of the Niagara and Lake Ontario – made the perfect location for a fort centuries ago. Old Fort Niagara’s incredibly preserved 18th and 19th century buildings have incredibly stories to tell – and a passionate, engaged staff who enjoy narrating the transition of the property from French to British and ultimately American control.