A few years ago, dining on the waterfront in Buffalo meant finding a nice quiet area and packing a picnic. However, with the recent restaurant and downtown resurgence, the waterfront has exploded with life. Restaurants are popping up on Lake Erie, the Buffalo & Niagara Rivers and the Erie Canal and there’s never been a better time to grab a drink or beer while watching the sunset. Here are our choices for the best places to go if you want to hangout with an awesome waterfront view:

The Ward at RiverWorks (359 Ganson St)
It’s the place to be this summer! With tons of spots to dock your boat or kayak and a large patio with plenty of bar seats, it’s all that you’ve been hoping for on a warm, sunny weekend. Add live music, rock climbing, a full scale brewery, zipliners flying overhead and some pub food from the folks behind Pearl Street and you’ve got yourself the best summer outing.

(Bonus) Tewksbury Lodge: Across the water from RiverWorks at Buffalo River Fest Park, Tewksbury Lodge normally hosts private events but opens its doors to the public for Sunday brunch from April to October. 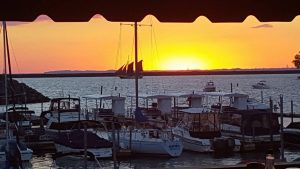 The view from Charlie’s Boat Yard

Charlie’s Boat Yard (1111 Fuhrmann Blvd)
Charlie’s Boat Yard is doing the heavy lifting of being the sole dining option on the Outer Harbor. With a menu that features Buffalo comfort food, including wings and stuffed peppers, they are also offering a seafood focused menu of clams, chowder, crab cakes and seared tuna along with American classics like burgers and yes, brunch. Their patio offers arguably the best-unobstructed view of Lake Erie and boat enthusiasts can watch them come and go at the nearby marina.

Liberty Hound (1 Naval Park Cove)
Overlooking the exciting hustle and bustle of Canalside and the towering battleships at the Buffalo & Erie County Naval & Military Park, Liberty Hound is the ideal spot for some fresh seafood appetizers, a monster shrimp po boy, delicious craft beers and boozy summer cocktails. Make sure you snag a seat on the pier!

Public House on the Lake (4914 Lake Shore Rd, Hamburg)
Public House sports one of the longest shoreline patios in town, giving everyone dining outside a killer view of Buffalo’s famous “over water” sunsets. Speaking of huge, their menu is a smorgasbord of classic Buffalo eats, tasty sandwiches, and tons of entrees including lobster, fish fry, surf and turf, and excellent mac and cheese. Pair your eats with a finely crafted brew from their long list of beers, too. 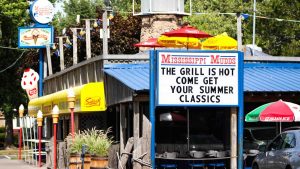 Mississippi Mudd’s (313 Niagara St, Tonawanda)
A true barometer of summer’s arrival is a visit to “Mudd’s” as the locals lovingly call it. Here, diners enjoy char-grilled hot dogs, sweet potato fries and Perry’s ice cream from a second-floor patio overlooking Isle View Park and the Niagara River across the street.

Smoke on the Water (77 Young St, Tonawanda)
The three brothers, Kevin, JJ and Mark Richert, of Smoke on the Water know BBQ. Sprinkling in with some Creole seafood flavor, SotW is a blend of delicious eats like ahi tuna tacos, coconut tiger shrimp and BBQ classics like brisket, pulled pork and applewood smoked turkey, situated right on Ellicott Creek. There’s even a nod to a Buffalo favorite – a thick cut fried bologna sandwich.

Hoak’s (4100 Lake Shore Rd, Hamburg)
Sunsets and seafood. That’s what you’ll be guaranteed with a visit to Hoak’s with fresh catches like shrimp, scallops, oysters and clams. A longstanding Buffalo favorite dining destination, Hoak’s was even a preferred watering hole for 716-native Tim Russert of Meet the Press fame, during and after his college tenure. 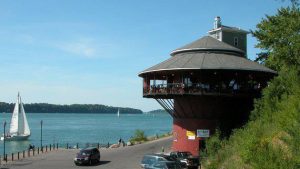 Photo courtesy of The Silo

The Silo (115 North Water St, Lewiston)
A stone’s throw from the mighty lower Niagara River, The Silo is built in its namesake – a repurposed, historic coal silo. A menu stocked with classic grill bites will have you drooling, but if you’re looking for a challenge try “The Haystack”, featured on the TV show Man Vs. Food. This sandwich is seasoned rib-eye, loaded with gooey mozzarella and topped with hash browns. Don’t forget to cool off with a cone from the caboose!

Bedrock Eatery (4038 Hoover Rd, Blasdell)
Taking a shift from their days of dogs and burgers, the new and improved Bedrock menu is still just as tasty but with a healthier edge. Patrons will be greeted with the same Lake Erie shoreline view they know and love, but will feast on leaner bison burgers, a beach fiesta and steak salad, and fresh tortilla chips with a multi-bean salsa.